In a special contribution from Natalie Dunn of Englemacher, ReGen speaks with Sven Friedrich of Solar Fake about his musical process and artistic pursuits. 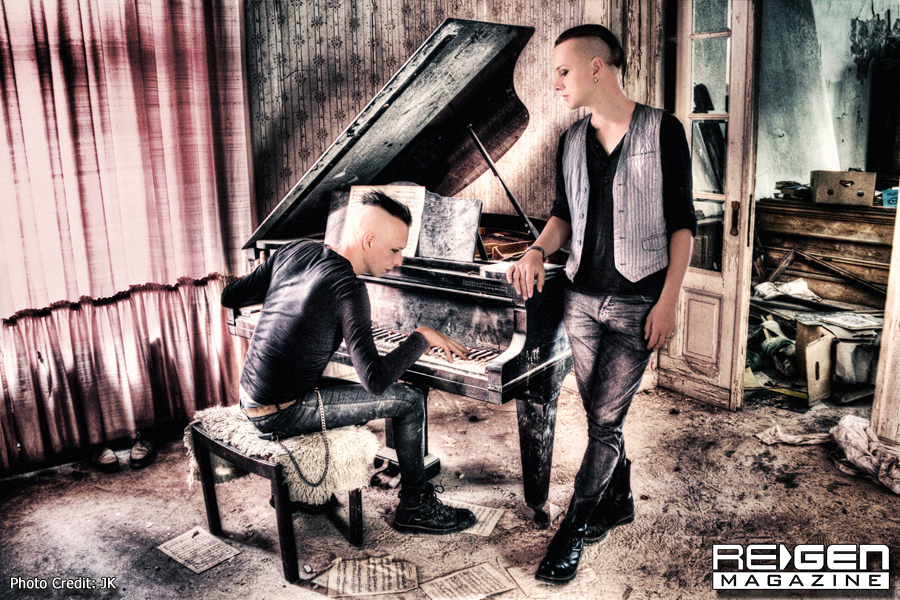 An InterView with Sven Friedrich of Solar Fake

Penetrating our ears all the way from Germany, Solar Fake has taken audiences on a journey through a spectrum of feelings with emotional lyrics, entrancing vocals, and catchy frequencies. Solar Fake impressed with the band’s fourth DAC topping album, Another Manic Episode, along with a killer music video late last year. An Out of Line artist, Solar Fake has graced the stages of many festivals, including Amphi, Blackfield, Darkstorm, E-Only, E-Tropolis, M’era Luna, Orus, and Wave Gotik Treffen. Also known for his other musical projects, Zeraphine and Dreadful Shadows, as well as his art company zerArt, Sven Friedrich is a man of many talents and hasn’t restrict his creativity to just one outlet, ensuring a dynamic body of work. Friedrich took the time out of his very busy schedule to allow us to get more personal.

How would you describe your music to those who have never heard of Solar Fake? 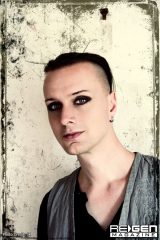 Friedrich: Well, first of all, it’s electronic music with vocals. I try to combine all the styles that I like, such as industrial, synthpop, trance, and many more. A lot of music inspires me to create my own style, but for me, it’s really hard to describe music. I think I would just play a few tracks.

I read that you created the name Solar Fake with the intent of symbolizing something unreal, to provoke thought about reality and to question what we know. If you could live in an alternate universe where there was no sun, what would life be like?

Friedrich: Well, it could be dark and silent, but if I could create my own universe, it would just be without all those idiots and without male hormones, which seem to drive men crazy and make them do the most stupid things you could imagine.

Your latest album, Another Manic Episode was just released in October of last year. Was it consciously conceptualized and planned, or did you just go with your intuition? What are some things that inspired this album? 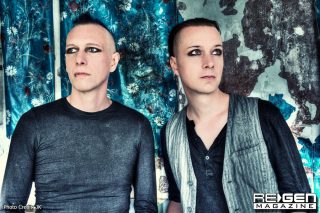 Friedrich: I never plan things. I just started writing the songs, but it all turned out to be more or less about psychic damages. It’s really interesting, and it’s good to sit on both sides of the table at the doctor. A lot of things have inspired me – mostly people I know or people I’ve met. I think everyone is damaged in a way. Some can hide it better than others. I think someone ‘normal’ is just absurd… and somehow boring.

In your creative process, which do you compose first – music or lyrics? Has it always been that way?

Friedrich: I always write the music first, then I work on the vocal lines and then I try to find the ideal words. I never wrote a song starting with the lyrics. I think I can’t do it that way. Music is my biggest inspiration for the lyrics.

I remember the first time I heard your music. It was the album Frontiers. The song ‘Under the Skies’ really struck a relatable chord for me. Are there songs you have heard, or written, that still have a deep emotional impact on you? 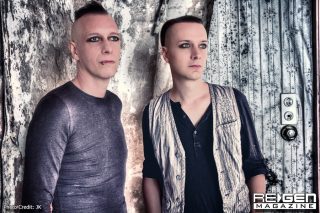 Friedrich: Well, all the songs that I have written within the last few years still have a strong impact on me. They are all a part of me and I go through these emotions every time I sing these songs. A very special song for me is ‘Where are you,’ for example, but it’s a little different. A day before a show, I’d heard that a friend of mine died from cancer. The next day, I dedicated this song to him and from this moment on, I always have to think about him when I sing it. It’s now unbreakably connected, and so I have a very special connection to each song.

When and how did you know you passionately wanted to be a musician? Have you ever had doubts or thoughts of giving up?

Friedrich: Well, I started learning classical guitar at the age of six. I think after my first lesson, I wanted to be a musician. I’ve also learned other instruments like piano, drums, and vocals. I also studied music. Of course I had doubts. When you see your friends starting their business careers and earning big money and you just don’t know how to pay the bills, but I was always too successful to give up. So I just started a parallel career so that I’m not only depending on my income as a musician. That was the best decision I took. It also takes a lot of pressure from you to be creative because you have to if you want to receive the next advance payment to pay your bills.

Is there any advice you would like to give to those who are pursuing a career as a Musician? 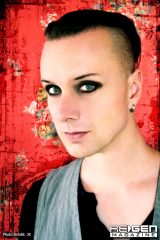 Friedrich: My advice is to try to have a fallback or at least another option in your life. I don’t know for sure, but I think no more than 5% of all musicians can make a good living out of their music, and less than 1% are really big stars with a lot of money, so just don’t think that you will be one of the few. Also, if you really like your own stuff, don’t take critics personally. Sometimes it’s worth thinking about it, sometimes it’s not. Also, don’t try to be the best, try to be unique.

You are not only a musician but an artist as well. Tell us about ZerArt and your involvement with it.

Friedrich: Well, I’m doing a lot of stuff with zerArt; it’s my graphic label. I make CD artworks and other print design. I also do some motion graphics, 3D artworks, and stuff like that, as well as ads and music videos. Apart from that, I also write and produce music for TV shows. It’s mostly documentaries or science features on German TV. That’s the most fun. I love doing that and I want to extend this work.

How do you find time to manage Solar Fake, as well as your side projects Zeraphine and Dreadful Shadows, touring, art, and your daily life (family, friends, etc.)?

Friedrich: Well, I get up at 7:00am each day and I work until 0:00 (midnight). I can’t remember when I had my last day off, but as long as it’s fun, it doesn’t feel like hard work. Also, I live in an area where most people spend their holidays, which also feels quite nice. But yes, there’s no time to waste.

When performing, do you have any rituals or self-preparations before going on stage? 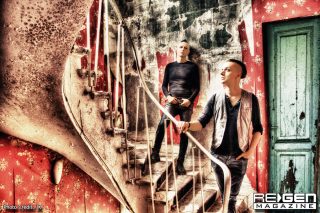 Friedrich: I’m always very nervous, even though I’ve done this for so many years now. I have some vocal exercises to warm up my voice and to get used to intervals. Also, I never drink before a show, but that’s not really a ritual, but more a technical way to not think about problems that could occur or how many people will be staring at you in a few minutes. In my earlier days, I was already nervous three days before a show. Since a few years ago, it starts 30 minutes before.

How is touring for you? Has touring enlightened you in your journey through life? What was your best and worst moments while touring?

Friedrich: I love touring. I love playing my songs to an audience who loves it. I love seeing many places and 99.9% of my tour experiences are completely positive. I couldn’t name the best moment as there were so many – e.g. when we played in Mexico, or Israel, or Lebanon, or my first time in front of over 1,000 people who just came to see us. Or the first time in front of 15,000 people at a festival… or opening for the heroes of my childhood, The Cure. There was only one really bad moment. It was the final tour of Dreadful Shadows and I caught the flu. Also, at a show in Potsdam, I had lost my voice in the third song and we had to stop playing and cancel the show.

What does the future have in store for Solar Fake?

Friedrich: Well, we recently played two festivals, including the great Amphi Festival in Cologne. Later this year, we are playing in Finland and in Russia, and we have a secret fan club show. One of the highlights will be our participation in ‘Gothic Meets Klassik,’ where we play our songs with a symphonic orchestra at Gewandhaus Leipzig. Soon, I will start writing new material for the next album and next year we also have something special, but it’s still a secret.

Who are some of your heroes and what is it about them that inspire you? 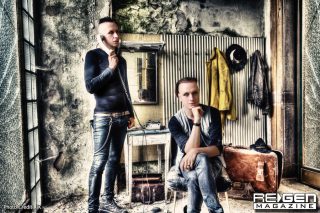 Friedrich: Well, bands that brought me to that scene were The Cure, Sisters of Mercy, Joy Division, Siouxsie, Fields of the Nephilim, and stuff like that. I still love their way of songwriting and the atmosphere in their songs. Now, I’m much more into electronic music. I don’t think I have music heroes at the moment, but there are a lot of bands that I really love, like VNV, Pitchfork, Grendel, Aesthetic Perfection, Rabia Sorda, Covenant… also stuff like Crystal Castles or even Skrillex I totally enjoy… but heroes would be a bit too much.

Outside of being a musician, what do you do for fun? What are some of your interests and hobbies?

Friedrich: To be honest, I don’t have time for any hobbies and I think my talent is completely used up in music. I can’t paint or model. Sometimes, I watch TV series like Doctor Who, American Horror Story, Ripper Street, the first two seasons of Hannibal, and of course, The Big Bang Theory. I also like reading. I usually read two books at a time – one easy fiction and one non-fiction book about history – so I can switch at any time.

We appreciate you taking the time for this interview and are looking forward to what the future holds for Solar Fake. Is there anything you’d like to say to your fans before parting?

Friedrich: I’m really bad at last words. What about… hmmm, don’t know… last words suck! Hope to see you some day at one of our shows!

Photography by JK, courtesy of Out of Line Music