Society of the Silver Cross InterView: Beyond the Known Parameters2

Society of the Silver Cross speaks with ReGen Magazine, having made its debut in November 2018 with more to come from the Seattle gothic duo.

Having made its debut with the “When You’re Gone” single and music video in November of 2018, the Seattle based gothic duo of Society of the Silver Cross offered the first taste of the band’s brand of lushly layered, darkly emotive ambience. With varying degrees of darkwave moods that range from the steely acoustic and organic sounds of neo-folk to the sharply produced and tightly knit melodies common to alternative rock, along with a few international influences and all points in between, the husband-and-wife pair of Joe Reineke and Karyn Gold-Reineke is certainly making a steady splash in modern gothic music. With a series of live shows already in the pipeline for early 2019 and more music on the way, ReGen Magazine had the opportunity to speak with Joe and Karyn about their creative process, instrumentation, visual style, the impact of the band’s travels to India and studio work with several big names in the alternative rock and metal community, all culminating in the sound that is Society of the Silver Cross.

Let’s get some of the obvious questions out of the way. Would you please tell us about the band’s formation and history? 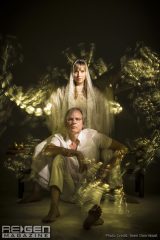 Joe: We’ve been married for seven years and about four years ago, we started playing and writing together as a duo, (and now have a five-piece band). After going to India, we wanted to incorporate the sounds of the culture we fell in love with. It wasn’t something we really set out to do like, ‘Let’s start a rock band and release records.’ We just wanted to play something interesting and that resonated with us as artists. All of a sudden, these interesting melodic and textural ideas start to manifest themselves and so, we just ‘played along’ and tried our best to let happen what was going to happen. We also wanted to pay attention to every second of the music and keep turning stones over until they seemed ‘right’ to us.

Society of the Silver Cross blends a variety of elements that are more in line with goth, darkwave, neo-folk, etc., but you’ve also had experienced running the Orbit Audio studio in Seattle and working with such names as Duff McKagan, Alice in Chains, Macklemore, etc. What can you tell us about how your experiences working with these more traditional rock and rap acts has affected or influenced your approach to your music?

Joe: We really wanted to do our own thing and not emulate other artists, but still be inspired by their quality and authenticity. Working with artists both big and small in the studio over the last 16 years, I’ve learned to be a really good listener to songs. Just like in meditation, it’s not so much of what you get from it; it’s what you’ll leave behind. Likewise, in music production, serving the song often means being subtractive; instead of always adding more and more, learning to taking away so that things can really breathe.

You say that you wanted to do your own thing, which really is the goal of any musician. These days, there does seem a greater potential for cross-pollination of genres across the board… what are your thoughts on the need for categorizations in this day and age? Are they relevant or required at all?

Joe: People love boxes. I think we all do this to some extent. Personally, I think there should be a quality category. With music there will always be two kinds of plates – a paper plate that you just use and throw away and a plate that you’ll want to keep because it has a purpose or value in your life.

What would you say was the biggest lesson you learned from the various artists you’ve worked with that you’ve taken into Society of the Silver Cross? In contrast, what did you learn not to do, or that you knew you wouldn’t want to do in your own music?

Joe: I’d say that recording has very little to do with recording and a lot more to do with people. After all, boxes of wires don’t make records; people do. What I learned not to do is say things like ‘that’ll do’ or ‘that’s good enough.’ I mean good enough for who or what? Shit, I want to make something great; not just ‘good enough.’

You’ve used a variety of instruments not common to ‘traditional’ Western music, like the Indian shahi baaja (which you’ve said is a kind of autoharp), as well as harmonium, and you’d said that ‘the instruments decided they were going to incorporate themselves.’ With that in mind, what is the songwriting process actually like, and to what extent do the songs take shape because of the instrument? 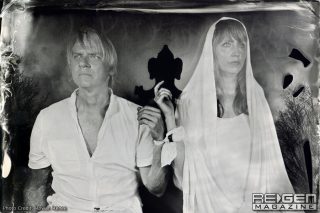 Karyn: The songwriting process is pretty relaxed. We have a music room in our home and typically write the bones of the songs there with the guitar and harmonium. All songs start out somewhere ethereal and intangible and make their journey into something tangible, usually beginning as an inspiration, a feeling, a melody, or lyric idea that pops into mind unexpectedly – we both often experience being ‘haunted’ by strong ideas until they finally get some attention. I get a lot of ideas while driving and can’t tell you how many times I’m pulled over on the side of the road humming something into my phone looking like a crazy person. The biggest part of songwriting is really becoming a channel for ideas to flow, creating a safe space to try new things, experiment and go beyond the known parameters. When we start to hear something we love, we lock in and let the process unfold from there listening for what it needs next. Like Joe said, sometimes you have to let things fall away, not be attached to any one idea or over complicate things, to be subtractive and selective. The instruments definitely have a big influence on how the songs take shape. Each has its own unique voice that wants to be expressed and heard, kind of like a choir, so we have to be good listeners in order to understand and honor what it would like to say, and how.

I feel there is a greater propensity in music across the board to search for inspiration in different cultures and sounds, and even in new technologies. As you’d explained that your travels to India played a part in your music, what have you found to be the biggest challenges in incorporating the sounds and methods of a different culture and musical history into your own? What other cultures or sounds are you exploring or would like to explore further in Society of the Silver Cross? 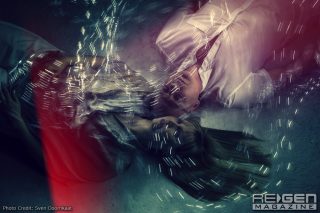 Joe: Oh, you mean how to we amplify the harmonium in a rock band setting? Gosh, that took us dang near a year to sort out! (Laughter) It’s been really fun and challenging to break out of the self-imposed songwriting prison, and to just simply throw out the rules and say goodbye to old musical conditioning and explore some new territory. Not sure which other cultures we want to explore yet; we may just want to continue to learn more and see where this road leads instead of jumping off it. We seem to enjoy instruments circling around each other at different pacing that somehow get folded into a musical tapestry.

Outside of the multicultural and incorporating non-Western instruments into a Western music context, nowadays we see a lot of people creating their own custom instruments. Is this something that has interested you at all?

Joe: We actually did already but can’t tell you what it is. I mean, who really wants to see how sausage is made? (Laughter) 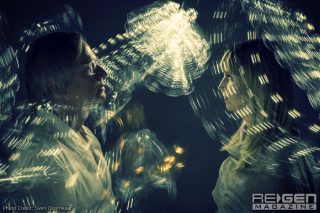 Karyn: (Laughter) I’ll tell you! We built our own electric harmonium for live performances. Amplifying my acoustic harmonium was super problematic. Its wood is very thick and doesn’t resonate like the thin wood of a guitar when using a contact pickup, coupled with its heavy mid-range frequencies – it pretty much equals feedback after the slightest amplification, and, let me tell you, this is a very foreign instrument for most rock and roll sound people to mic. Creating our own electric harmonium solved this and I am so thankful that I can turn up as loud as I need without any issues.

Are there any sounds in your head as you write that you’ve had difficulty recreating with existing instruments?

Joe: Not really. There are so many tools available today, seems like there’s hardly a sound that you can’t create.

Besides the music video for ‘When You’re Gone,’ there are also the band photos by Rowan Renee and Sven Doornkaat, all of which bear a similarly ethereal style that complements the haunting nature of your music. To what extent do the visuals enter into your mind in the creative process? How much do the imagery and the music affect or interact with each other in the creative process?

Joe: In a way, we already created the film or movie with the music; we then wanted the visuals to become the soundtrack to our film. 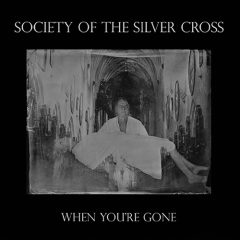 Karyn: We definitely have a lot of ideas for interesting visuals and imagery and feel they are one and the same with the music – both being languages of emotion, able to convey things that words are simply inadequate to fully describe. We wanted our images to be as otherworldly as the music. These are all real photographs created with special photography techniques opposed to digital manipulation. When we worked with Sven, we did light painting, which is a method of keeping the shutter open in a pitch black room and shining lights in unusual places. We kept pushing to make things weirder and weirder. By the end of the shoot, he was looking at images on his camera screen and going, ‘Whoa!!!’ That’s when we knew we’d got what we came for.

What’s next for the band – performing live, additional videos, etc.?

Karyn: We’ll be continuing to play shows, and also planning some international dates. We are releasing a new single in spring with a very cool video, our full-length album will follow shortly after; so incredibly excited for the future. 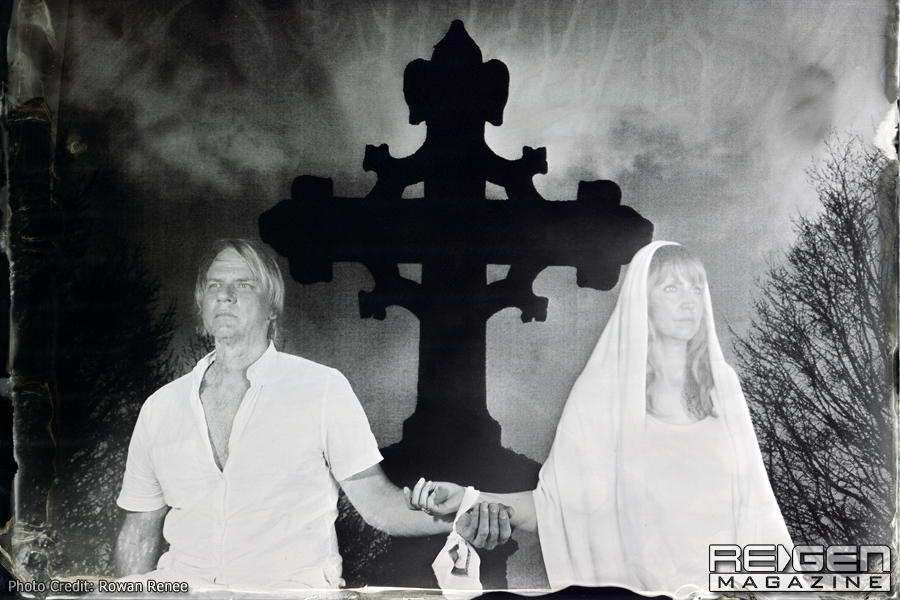