SKOLD InterView: “I Am the Wolf.”1

Persevering against all obstacles and continuing to follow his own singular artistic path, SKOLD speaks with ReGen about his latest solo album and his long history of collaboration.

An InterView with Tim Sköld of SKOLD

Tim Sköld – a.k.a. SKOLD – has spent the better part of three decades cultivating a reputation not only as a solo performer but also as a formidable collaborator. He’s been a member of Kingpin/Shotgun Messiah, KMFDM and MDFMK, Marilyn Manson, and Doctor Midnight & The Mercy Cult; he’s toured as a live member of ohGr and Psyclon Nine; he’s produced various releases by Motionless in White, and has performed sessions and/or remixed 16volt, Linkin Park, Peter Murphy, <PIG>, Lords of Acid, Left Spine Down, and more. With such an extensive resume, to say that he’s left an indelible mark on modern music would be an understatement, and that’s not even counting his solo material, with the 2019 release of his fourth album Never Is Now being the latest. ReGen Magazine had the opportunity to speak with Tim Sköld following his stint on tour with Psyclon Nine and just before the release of Never Is Now, digging into the details of his songwriting and collaborative process, along with a few hints of what is to come on the upcoming solo tour, and some cryptic words of something more to come… what could it be? Hopefully, we’ll find out soon.

You’re very well known for your numerous collaborations and production credits; most recently, you were the guitarist on Psyclon Nine’s tour (along with Matthew Setzer and Jon Siren). First of all, tell us about how you came to work with Nero and be part of this live incarnation of Psyclon Nine? In what ways did the four of you gel as a band, and do you feel that you can or will work with them again in the future?

SKOLD: I have had contact with Nero Bellum for many years and we have spoken about doing something together several times. I was very excited when Nero finally asked me to play guitar for Psyclon Nine. I think Psyclon Nine is an amazing hybrid of dark electronics and heavy metal stylings, particularly with the guitar work. My first few bands were straight up metal bands and I’m stoked playing guitar like this. It is both very challenging and rewarding.
When the stars finally aligned and we started working together, it quickly became undeniable and yes, we will be working together again in several different set ups actually.

Secondly, what is most important to you in a collaboration? Obviously, one should get along on a personal level, but beyond that or on a musical level, what makes it or breaks it for you?

SKOLD: Oh, the personal level is much more important for me these days. I’m really not going to spend the precious little time I have left on this planet working with people I do not like. I have been super lucky in the past and worked with a lot of amazing people that I got along with really well; it’s only been the last few years I have run into some really untrustworthy people. That has made me more aware than ever that I need to know who I am about to work with and I have to have a level of trust and understanding with those people.

Are there any other collaborations in the works that you can tell us about?

SKOLD: Nope. I wish I could, but it’s a little too early to talk about. It’s kind of driving me crazy, but I really don’t want to jinx the project by being too enthusiastic and running my mouth about it.

You have a new album, Never Is Now, released in April, and a tour in July/August. Regarding the album, what can you tell us about it?

SKOLD: I can tell you that there’s too much music on this album to fit on a single slab of vinyl LP and it’s right at the max of what a CD can hold. Musically, the album is similar to the two previous albums, but also quite different. I have reached new depths of the rabbit hole – we all float down here.

In what ways do you feel it progresses from your previous outing, The Undoing?

SKOLD: Well, it is obviously a progression in as much as it was written and recorded long after the other album. Because music to me is very much a snapshot in time and none of these songs could have been achieved at another point. There’s always a catch in working with ‘modern’ sounds as much as ‘vintage’ because retro might be very much de rigueur, you have to pay attention to the balance between relying on your experience and trying new things. I feel this album walks that very fine line with style.

Were there any changes in your approach to songwriting and/or production between The Undoing and Never Is Now? What did you do differently this time around, and how do you feel it strengthened the new album?

SKOLD: Personal changes in my life very much affect my music, so there is definitely and change in ‘headspace,’ but except for touring in 2016, I haven’t done much traveling for some time. Being stationary longer allowed me to focus a little deeper I think.

What sorts of lyrical themes do you feel define the new record as a whole?

SKOLD: Oh, I hate ‘themes’ as concepts and will write whatever the hell I feel like at any given point. It’s only much later I realize that some songs just do not fit with other songs and have to be left off the album. I always write way too much music for this reason alone.

After having worked with Metropolis on your previous two albums, what prompted the move to Cleopatra Records?

SKOLD: Every artist has to try new things to stay alive; if not financially, they have to do it to stay creative. There are both positive and negative aspects with this change, but I really have nothing bad to say about Metropolis – quite the opposite.

More and more artists have been taking greater control of their marketing and merch, although labels like Cleopatra and Metropolis remain strong entities in underground and niche music (primarily, I’d say, for being artist-friendly). What are your thoughts on the changes in the music industry going on now? How do you feel you’ve adjusted to them – or to put it another way, how involved are you in the ‘business’ side of your art and music?

SKOLD: I have always been very involved in most aspects of every project I’ve ever been involved with. I played bass for ohGr, I play guitar for Psyclon Nine, I was the Vice President of MDFMK, Inc., and I designed logos for both Marilyn Manson and Motionless in White. So yeah, I’m all over the place and always have been. It is for better or for worse though. It’s good because quality control goes through the roof due to emotional attachment; bad because I can get hung up on small things that don’t matter in the long run. Sometimes the hardest thing to do is to move on.

The cover artwork for Never Is Now stems off from The Undoing; very stylized, and with the prevalent image of a wolf-like animal. What about this imagery do you feel best represents the music of these two albums, and you as an artist at this stage in your career?

SKOLD: I am the wolf. This wolf has been subjected to every sort of personal and business obstacle and hurdle you could possibly think of; slings and arrows not just from were I would expect it, but also from were I didn’t. Some of it cuts deep and will always be a part of me and I think that is what the bullfighting aspect of the album art is supposed to represent.

As for the tour, you’d gone on the road in North America for The Undoing with Eli James and Tiffany Lowe. What can you tell us about your tour plans for Never Is Now and who else may be involved?

SKOLD: I do know that I have a new lineup – Jon Siren will be playing drums and Nero Bellum is playing keys. From touring with those guys as Psyclon Nine, it became obvious that we should play together more. The tour is 30 U.S.A. dates, starting early July. 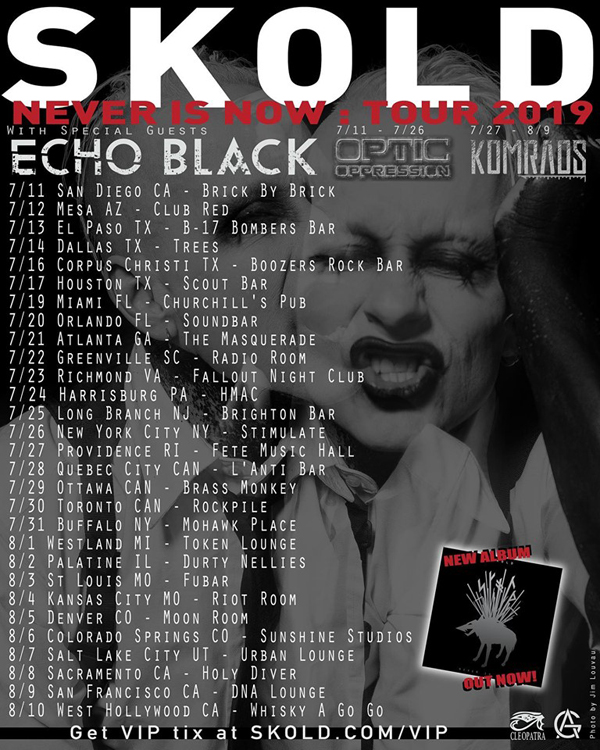 SKOLD: I’m not really a purist as such, but I do really appreciate some acts for keeping their stuff in a certain realm. As humans, we do need terms and labels to communicate, so genres are pretty important when it comes to that. I’m also all for experimenting and thinking out of the box, but there are often times I hear more conventional rock bands trying what can only be described as industrial sounds and styling and most of the time, it fails hard.

Is there anything else you’ve got in the pipeline that you’d like to tell us about?

SKOLD: There is, but I want to wait until we are further down the pipeline. It’s so important it will have to be a separate InterView. Trust me, it really is.