A father, a fighter, a survivor – Rexx Arkana is all of these things and more, as ReGen‘s Brian McLelland speaks with him about his past and present accomplishments, while looking forward to the future.

Aristotle said that “character is action” – meaning that who we are as individuals is not defined so much by what we say, but by our deeds. What we do, the actions we take, determine our character. 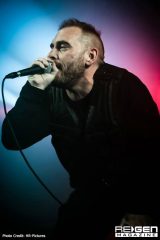 Rexx Arkana might best be known for founding Brüderschaft, a project that gathered together great musical talent and donated all net profits to charity, specifically cancer research in memory of his late father. Brüderschaft’s roster has included members of VNV Nation, Assemblage 23, Icon of Coil, Covenant, Apoptygma Berzerk, System Syn, Haujobb, State of the Union, and countless remixes by a plethora of artists in the modern electro scene.
Perhaps Arkana’s name is recognized from his work in FGFC820, whose work has pounded dance floors mercilessly while prominently featuring imagery and lyrics that discuss global war, civil unrest, injustice, and political revolution. FGFC820 conveys a message of resistance and the will to fight for what is right, victory at all costs.
In keeping with the spirit of his work, Arkana, diagnosed with cancer, has been keeping his feet under him to fight. While we might know the man for his musical endeavors, which have resounded through headphones and speakers across the world, Arkana is a father, a fighter, and survivor. More importantly, he’s one of us.
Arkana recently spoke with ReGen about what got him started, what’s coming soon, and what comes next. 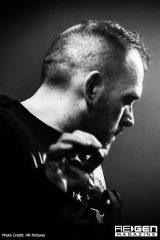 Arkana: I have always been incredibly drawn to music, for some reason. One of the earliest memories of my childhood is of being four or five years old in the early ’70s and spinning the little plastic discs of my Fisher Price Music Box Record Player. I guess in a sense I’ve been DJing for over 40 years. As a teenager in middle school at the start of the ’80s, my best friend Frank and I would lock ourselves in his bedroom and obsessively listen to all the weirdly named and oddly dressed English bands whose albums he’d bring home from the record shows he’d routinely visit with his father.
As two suburban white kids from a primarily agricultural area, what was happening in Britain couldn’t seem any more bizarre. I was hooked.

Forgive me if my next question is a bit insensitive or too topical, but I’ve always been an advocate for candor and honesty. Given your recent diagnosis, I’m sure much has changed for you in your personal life, but what, if anything, has changed for you musically? If so, what comes next? What does FGFC820/Brüderschaft and your music career in general look like moving forward from this point? 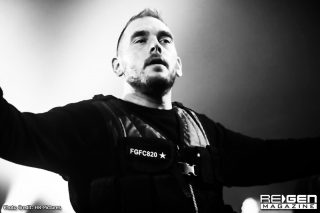 Arkana: Life never comes with any guarantees, so making plans always has the potential to be a fool’s effort. That said, God-willing, my medical condition won’t do anything more than perhaps readjust certain original timelines. Alfa Matrix has wanted to do a vinyl release for Brüderschaft, which I support, but which won’t likely entail any new material commitment; just remixes and artistic direction on my part. FGFC820 has been on a songwriting hiatus for four years already as we require an entire overhaul of our studio. So nothing was going to happen anytime soon there anyway, despite our desire to eventually write another album. The most probable impact will be on the new Coldkill project between Eric Eldridge and myself. 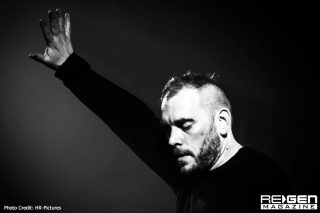 My recent surgery has impacted my vocal chords and will require ongoing recovery until they are hopefully fully restored. This prohibits any new vocal tracking for the time being. That said, we prepared ourselves accordingly in advance, making sure that we’d gotten down everything we needed from me beforehand. All necessary vocals for the next single, ‘Invisible,’ are done, so it’s all down to remix and production work, and if my vocals were to never fully return to their pre-surgery state, we technically have enough to go forward with the debut album. Obviously, live performances and appearances are off the table for the moment, but I’m hoping to be well enough by the fall to return to playing shows.

What can we expect from Coldkill? How does it compare to your other work and what kind of themes will the first album contain? 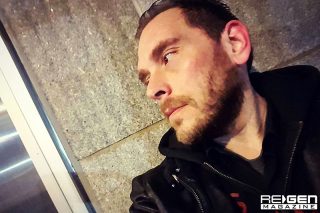 Arkana: Coldkill harkens back to my roots in electronic music, to the minimal sound restrictions of the first wave of European synthpop artists from the early ’80s. A colleague referred to listening to Coldkill as kind of like making out with your high school girlfriend again. There’s a comforting familiarity to it, but it’s also matured in some way. We released our debut digital 12-inch single ‘I’m Yours’ on Valentine’s Day through our Bandcamp.
The next single, ‘Invisible’ will release soon, with the debut album Distance by Design to follow. It’s melodic melancholia, love songs for living.

Finally, what are you enjoying right now?

Arkana: Right now, I’m enjoying an endless stream of daytime television. (Laughter) Drugs. Pain, though not so much enjoying that. Musically, ‘Tennessee’ by Allan Rayman has been getting me through my days; that, along with Mondträume and The Broods.

Is there anything special you’d like to add, say, talk about, or mention?

Arkana: Simply thank you for your interest and a huge thank you to everyone out there who has passed along their messages of positivity and support. It’s been very humbling and touching for me to experience.

Fighting cancer isn’t an easy or inexpensive fight. Donations can be made to help Arkana at http://www.gofundme.com/srzrhp6c.
If you can’t donate, then share – either action will help, and we know what action does for our character.

“My best friend is the man who in wishing me well wishes it for my sake.” – Aristotle