Touting her motto of “Go Big or Go Home,” Ohio artist and metalworker Rachel Schutt speaks with ReGen about her recent contributions to KMFDM’s intense visual aesthetic, along with her other artistic endeavors.

An InterView with Rachel Schutt

KMFDM is well renowned not only for the band’s abrasive blend of musical styles and biting sociopolitical commentary, but also for having a profound relationship with the fans. Over the years, Sascha Konietzko and company have pointed out the importance of their audience for the group’s longevity, with some even having the opportunity to participate in the larger artistic vision of the Ultra Heavy Beat. One such person is Rachel Schutt, an Ohio based artist and metalworker commissioned by the band to create aluminum metal covers for the vinyl reissues of the classic albums NIHIL and ANGST, as well as for the latest record, PARADISE. Recreating Aidan “Brute!” Hughes’ iconic and colorful comic book inspired images in a monochromatic metal package, her work has been in a short time becoming a staple of KMFDM’s intense visual aesthetic, breathing new life into artwork that has been ingrained in the minds of fans for many years. Schutt was kind enough to take the time to speak with ReGen Magazine about her background and approach to metal artistry, describing the impact that the music of KMFDM has had on her… something every fan can absolutely relate to. As well, she gives us some insight into her other projects and what new steely treasures we can expect from her in the future.

First of all, would you give us some of your background and how you got into metal/art? What were the major catalysts that led to this as a life pursuit? 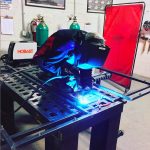 Schutt: It’s hard to answer how I became an artist… I feel like I’ve always been one. I admired my grandfather, who was an extraordinary maker and a WWII veteran who taught himself how to weld before the draft. Hence, welding is one of my many weapons of choice for art making! After changing my illustration degree to a focus in studio/fine arts, I was introduced to welding during my second semester/sophomore year at Columbus College of Art & Design (CCAD) thanks to Casey Bradley. While at CCAD, I tried every metal working process with an interest in mold making and installation art. In 2013, I found a maker community named Columbus Idea Foundry and from there, I have grown my welding/metal fab/teaching skills into what they are today.

You’ve now had the honor of recreating Aidan ‘Brute!’ Hughes’ iconic covers for KMFDM’s ANGST and NIHIL albums for the deluxe aluminum packages. How did you first become a fan of KMFDM; in what ways does the band’s music still connect with you and how you approach your work?

Schutt: I’m a fan thanks to my partner who invited me to go with him to a KMFDM show in Covington, KY on August 21, 2011 during the WTF?! Tour. KMFDM’s music is the perfect pairing for metalworking and especially with themes speaking out against oppression and being a woman in a male dominated industry… I’ve been told I ‘don’t look like a welder…’ I live for being what people don’t expect – a.k.a. a proud freak.
Their music also motivates me to rise to any occasion and be the best I can be, try harder than the rest, and in my opinion, metal/art requires persistence and resistance.

KMFDM fans are among the most loyal and devoted, and the band has always been receptive and communicative; would you tell us about how you came to do these metal packages for the band?

Schutt: I show my support through social media and buying merch. I left a short comment for Fulfillment Merch while finalizing a purchase saying that I had some product ideas. Mike VanHassel followed up via email and I threw some concepts at him and he came to me with the aluminum plate idea. A few weeks later, I had a prototype using the ‘Godlike’ art and etching with Ferric Chloride, which… holy shit, that stuff is scary!

Was there any sort of consultation or communication with Hughes as you were making these aluminum covers for the band?

Schutt: I haven’t consulted or communicated with Hughes while making the album covers for the band. I hope that he’s happy with the results because it’s important to me to make his artwork as recognizable as possible.

What would you say you were able to glean from his artistic approach in your metal renditions – perhaps some greater appreciation or understanding for his style?

Schutt: The album art that I’ve put on metal so far are surely burned into my brain, which has granted me a greater appreciation for the details. Hughes is an incredible master of his craft and every line serves a purpose for telling a badass punchy story.

His covers are particularly striking for their minimalism, especially in the use of limited color, while your metal versions by nature were not colorized; did this offer any sort of challenge in how you saw or approached the covers?

Schutt: While I considered making the plates with color, the result with patina on metal wouldn’t do his art justice. Since Hughes’ covers are minimalist, it’s important that I suggest the areas of color with line work because they enhance the art’s dimension. Every line that Hughes lays down is important!

NIHIL and ANGST are two of the band’s most beloved albums, and in many ways are still rather definitive to what KMFDM sounds like… but tell us about your connection to these albums? Are either of them among your favorites? What other favorites would you hope to have the opportunity to create a metal package for? 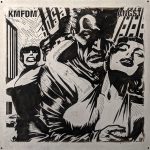 Schutt: I love NIHIL and ANGST for the classic KMFDM sound! I of course heavily listen to the albums while working on the plates… it’s inspiring for sure!
It’s really hard for me to say that any one KMFDM album is my favorite, because depending on the day and my mood, I can krank up a different album to fit my trajectory. Attak, Blitz, WTF?!, Kunst, Our Time Will Come, and Hell Yeah are among my top most played. ‘Strut,’ without fail, pumps me up and puts me in the best mindspace to take on anything.

Similarly, what other bands are you a fan of that you’d like the chance to work with in a similar capacity?

Schutt: It would be awesome to work with Gary Numan in some way. I love Gary’s style and energy onstage. Rob Zombie would be another bucket list artist to collaborate with in regards to a stage display.

Outside of working with KMFDM, what would you say have been your biggest accomplishments? What sort of goals or aspirations do you feel you’ve yet to achieve with regards to your metal/art work? 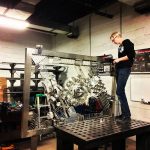 Schutt: My motto is, ‘Go big or go home!’
I’ve designed and fabricated an ear of corn – because Ohio – which stood over 12-feet for a downtown Columbus, OH farmers market that had kinetic kernels and was able to disassemble to fit through an ADA compliant door.
I had one of my large scale mixed media space paintings featured in a metamedia performance art show, Gallery of Echos: ColumbUS Public Art Project, produced by Shadowbox Live.

I’ve had work crane delivered for a rooftop gin bar, which isn’t really an accomplishment, but something cool I never dreamed I would be able to say! I also designed and fabricated a 14-foot-tall art deco inspired wall sculpture made of smallwares for a local restaurant supplier corp.

What’s next for you? Anything in particular that you’re working on that you’d like to tell us about?

Schutt: I have a few small scale metal wall sculptures I’m going to make before 2019 is out! Continuing the use of the square metal plate format, I want to hang them in sequence so that they create a whole image or form an encoded message written in multiple passes of base64, rot13, hex, or binary. I’m blending my maker skills with my passion for hardware hacking to fabricate stealth rogue appliances and other tech gizmos as the ‘Q’ branch for an information security firm.
I’m always striving to learn new things and grow and KMFDM is my drug of choice through it all!