One of the electro/industrial scene’s most popular and longest lasting acts hits the U.S. shores yet again, stopping to talk to ReGen on just what makes the Timekillers tick.

An InterView with Peter Spilles of Project Pitchfork 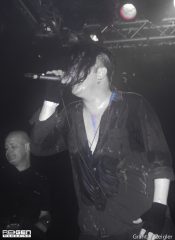 Project Pitchfork played its first show in February of 1990; ever since then, the band has been a driving force in the industrial and electronic genres. The German act got its band name by picking random words from the dictionary, but efforts and shows have been anything but random as time progressed. Because of front man Peter Spilles’ fulltime dedication to Project Pitchfork, the band has released a multitude of EPs and albums, giving fans exciting and new music almost every year since the group’s inception. The song “Timekiller” has been played countless times at goth/industrial clubs throughout the world and has become an industrial anthem that truly represents dark electronic music.

In May 2013, Project Pitchfork set out on a full U.S. tour and brought with them for a second time the Canadian electro act Ayria. On June 9 the two groups along with local opener Unit:Code Machine played at Trees in Dallas, Texas. But before the show commenced, Peter Spilles sat down with ReGen Magazine to explain how he got his hairstyle, how the current tour went and why the world is such a dark place.

You’re about to wrap up your latest tour; how has the tour gone so far and have you had any highlights or new experiences stand out?

This tour is more of an extensive one where you’re fully touring the U.S. How was the decision made to fully tour this time around?

Spilles: We did this back in 2009-10 and now we’re doing it in 2013-14. It’s mainly because we have to get working visas and they’re fucking expensive, but they last for a year. So, that’s why we’re touring for a full year.

Why is it so hard to get visas? Is it the situation overseas or is it the U.S. being difficult?

Spilles: It’s the U.S. for sure. Not sure why it is the way it is, but it seems like they’re trying to keep other cultures away.

Why is Black the title of your new album?

Spilles: Because it needed a title. (Laughs) The other albums were titled more complicated stuff and I wanted to go with something plain.

To me, the album’s lyrics seem a lot darker than some of your work in the past. Does that have anything to do with it?

Spilles: Of course. You write the music, then the lyrics, and after it’s done, I sit down and see what kind of album it is.

Can you walk me through the creative process a little bit? It seems as if the writing is very reflective on the negative elements of society. 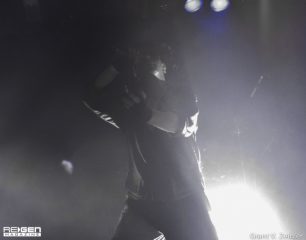 Spilles: First of all, it’s influenced or inspired by everyday life, news, media, and politics. I always write the music first, then the lyrics. I try to translate the feelings of the music into words. I don’t think this album is especially reflective like you said. Many of our songs and albums in the past are the same way. It’s all relative.

You said the music comes first for you. How do you translate that emotion into your music?

Spilles: With music, you can speak with emotions much easier because there’s no filter. There are no rules for words and sentences here. Music is fluent and it is a universal language, which simply transports emotions. How does it happen? I don’t know it just simply does. (Laughs) If I sit on the keyboard and play stuff, sometimes it happens and sometimes not. It simply clicks when it does.

Project Pitchfork is coming up on its 25th anniversary. What are some of the main experiences you remember or have taken away? You’ve had Rammstein open for you and many other great moments. What do you take away most?

Spilles: I take away the fact I can live the way I’ve always wanted to live. I’m an independent musician; I don’t have to work besides my musical work. That’s a dream come true to me.

You’ve brought back Ayria with you. Do you yourself pronounce it area or are-rea?

Nice. How did your relationship with the band form and what keeps you bringing Ayria back?

Spilles: Simply because we did this in 2010 and it was so harmonic. We searched a little for other attractions, but there weren’t really any. So, we just said, ‘Let’s do it again.’ Oh, and we met at a Kinetik Festival.

How do you breakdown the reception you get globally? You’re popular in Europe and Mexico, but how are you received in the U.S. and in particular the southern states like Texas?

Spilles: I don’t know. It changes all the time over the years. I don’t think in these categories. If there are people coming to the show, we’re glad to have fun with them and do our best to put on a good show. I don’t make comparisons because I’ve been in front of 20,000 and 50,000 people at festivals and in front of 20 people in small clubs. It’s a different experience, but the energy is always the same. Just because there are only 20 people doesn’t mean we are less nervous or give less. It’s a constant giving. The amount of people doesn’t matter. The mentality is that the scene is a worldwide phenomenon and the people themselves aren’t that much different. Whether you’re here, in Mexico, Europe, or Russia, the people are the same.

Talking about you a little bit, how did you come about your hairstyle? It is reminiscent of the devil-lock the Misfits wear, but a more goth version.

Spilles: (Laughs) It’s simply a gothic hairstyle. When I was much younger, I had a tail in the back and it had a streak. Now it’s come back after many years of shaving the sides, so I’ve just decided to let everything grow and I put it all in the front.

How do you manage your side projects? Has Santa Hates You given you a different look on what you do with Project Pitchfork?

Spilles: Of course. There are certain aspects of music I have to put through a filter. With side projects I can let other things out without letting them influence the music of Pitchfork. It’s like a painter who paints still lives, but sometimes the painter wants to paint naked women.

As someone who’s an avid observer of the world and creates music from his experiences in the world, what do you see as a global problem that truly affects us all?

Spilles: (Laughs) Well… good question. I don’t have an answer to that right away. When you’re on tour, you’re focused on a very little world. All these places come and go and the next day you’re in another city. The biggest problem related to all of us is ourselves. Humans are the greatest problems for humans. We plague ourselves the most. We could achieve so much more if certain bullshit would stop like religion influencing politics or the stupidity of racism. There’s the greed for money instead of trying to find the cures for things such as in medicine. We could be so much more ahead, but we’d probably still have problems. We’re hopefully trending to where things could get better though.

Fun question: If you could be any superhero who would you be?

Spilles: Yes, thank you for making this interview and thanks to all the readers of ReGen Magazine and stay dark. 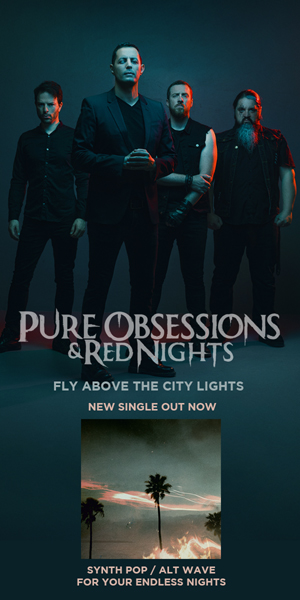