Officers InterView: Ghosts in the Machine0

Leeds, UK band Officers make dark guttural electronic rock music influenced by the likes of Primal Scream and Nine Inch Nails. For a new band they’re not doing too bad, and can count Atticus Ross (NIN, How To Destroy Angels), Placebo and Gary Numan among their fans.

An InterView with Jamie Baker and Matt Southall of Officers

Following the release of their debut album On the Twelve Thrones in 2011, the unit (headed up in the studio by vocalist Matt Southall and guitarist Jamie Baker) have been biding their time before taking a live show around the UK this summer with Numan himself. ReGen took the time to chat with to Baker and Southall about the origins of their band, the ideas and inspirations behind their first full-length record, and their plans for 2012.

There’s not much information about the band online, so how and why did you form Officers?

Baker: We formed a few years ago. Matt and myself had played in other bands together and decided we needed to do something different to what we had done before. Up until that point, Matt hadn’t actually sung before. We just demoed various ideas, and I put them all up online. This was around the time of the MySpace boom, and very quickly things started happening for us, before we had even played live. Within a month, we had been asked to play at some really prestigious London club nights, put a full live band together and started gathering some airplay and made some great relationships. We then spent a couple of years working on our live sound, writing and learning before actually thinking about going into the studio properly. 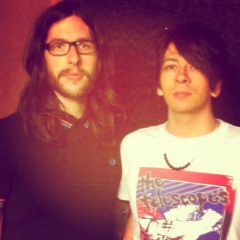 You were first called The Officers, and you released a single called Red Chapter back in 2009 before going quiet until 2011. Does dropping the ‘The’ represent a new chapter for the band?

Baker: We have always wanted to become a great live band, and that’s something that takes time, especially when you are developing your own direction and sound. Things happened very quickly for us early on. From finishing two or three home demo recordings, to the MySpace boom around that time, to then being tipped by Alan McGee (the head of Creation Records and the discoverer of Oasis, Primal Scream and The Jesus and Mary Chain) as ‘the next great British band.’ We got wrapped up in the hype around that time, being told what we were without even having what we felt were the right songs or knowing what we wanted to do ourselves. We decided to not put anything out, took some time out and made a conscious decision to play a lot of shows with more established bands to help realize which way we wanted to go and how we wanted to do it.

Southall: After we did Red Chapter we actually had a few record deals fall through on us as a result of the economic and industry downturn. This obviously left us to make big decisions about what we were doing. We took two years to make and get this record ready, so we didn’t really ever go anywhere. People assume if you’re not touring then you’re not doing anything, when usually it’s the complete opposite. The idea to drop “the” was very insignificant, and it may come and go as we see fit.

Matt has said before that one of the most common themes on your debut album, On the Twelve Thrones, is betrayal. Jamie, can you talk us through how that comes across for you on the record?

Baker: Lyrically, it’s something that Matt would have to answer; I wouldn’t want to put words into his mouth, but we lived together while we were both going through some pretty dark and difficult times, and there are things that I feel I can relate to directly. Or–I interpret that I can relate to it directly, but like everything on the album it could be complete misdirection. We have never discussed it in person together, apart from when telling him which lines I think are amazing (and there are quite a few of them). I think I am right in saying, though, that whatever Matt writes in his lyrics will be from a personal place and couldn’t be based on anything but personal experience. Not that he would want to deny anyone to take from the songs whatever they wanted; he’s definitely sharing those thoughts because he knows others will relate to it and take them for themselves. From my own perspective, the music, sounds and the feelings around what I wrote and play are hugely personal. It’s not a perfect record, but they never are. It’s an honest place of where we were at that time, and what was going on when we wrote those songs and when they came together and what we put into them. There are themes of the bad, the good, insanity, euphoria, loyalty, betrayal, anxiety, aloofness, accomplishment and celebration; it’s all in there.

That album was released in 2011. Will you be working on new material this year? How will it differ from On the Twelve Thrones, sonically and thematically?

Baker: We are well underway with the new songs. Matt continues with his prolific demoing, and I continue to feed my pedal habit, alongside finding new ways of playing and writing, so there will always be new sounds and sonic directions from us. We definitely don’t want to make another Thrones, but it will still sound like Officers. Currently we are just concentrating on getting ready for the Numan tour. But we have a lots of material. Hundreds of songs.

What is your attitude, as a re-emerging artist, to music piracy? 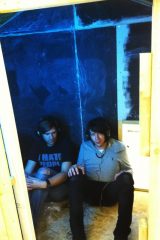 Baker: It is really hard for nearly all new bands in the current UK music market.  The industry as a whole has been really slow to react to the Internet boom because of a fear of it, much like the days in the ’80s when home taping became cited as the death of music. We recently saw a news piece which argued the case that there actually needs to be more sites like Spotify and new ways for fans to get hold of music, because if they like the music and they like the band and what they stand for, the chance is that they might go and buy an album, or maybe even buy a gig ticket on the back of it or a T-shirt. Obviously, in turn this helps to ensure a band can continue to produce music. Record companies don’t seem to have cottoned on to that or know how to measure it yet, though. Things have moved on, and things have got to change, and that’s how as a band we have started to try and see things. We have always wanted to bring back the opportunity for a real kind of interaction with the people who might want to buy the record, whether that’s something physical with the record itself, its artwork, sharing the things that got us to the point of the finished album, or the actual live shows themselves. People have to trust you to buy it however, and want you to do the next one. You do see stuff happening more now, though, with sites like PledgeMusic putting records out, MP3 blogs and bands doing things off their own backs. There is some amazing stuff going on, but it has gone back underground like in the late ’60s, ’80s and early ’90s where fanzines, scenes and movements gave people the chance to be part of something more interesting and challenging.

Your track ‘Counting My Guns’ has been used in a BBC Earth America viral before now for Halloween, and it was also recently used as part of London Fashion Week. As an independent act, what does this type of exposure mean to you?

Baker: It obviously means a lot. We seem to be transcending a lot of cultures as well as territories at the moment. As everything we do is completely self-supported and produced, its always satisfying to see more people being able to hear it and it being used creatively. The album is due to be released in Europe soon, so we are looking forward to that too.

You are going on tour this summer with Gary Numan; what does that opportunity mean to you?

Baker: We really can’t wait. We have obviously also been influenced by Numan’s sounds and approach and probably through other bands influenced by him, too. We have a lot of respect for the way he has reinvented his music and stayed relevant in his own terms. It came about in such a nice way, too. We were co-hosting a radio show with UK DJ Eddy Temple Morris when we hit Eddy with a remix of one of Gary’s classic tunes, and Eddy proclaimed live on air that in his mind, Officers was the sort of thing Numan would enjoy. This somehow progressed to getting a #getittogary Twitter trend going. Luckily for us, Eddy did actually get it to Numan, and he really liked what he heard and started to let everyone else know about it in interviews. This collaboration between DJs, musicians and artists has actually restored a bit of our faith in the industry. We’ve been given a platform to do our thing, because of a genuine love for our music and the art, rather than the kudos or the cash. In the current industry climate, it takes a lot for people to stick their neck out like that.

Will the dynamic of the band change at all in 2012?

Baker: We have always had a lot of electronica and programming going when we play, and its important that we do as much as we physically can live. I’m employing a lot of live looping rather than using backing tracks this time round. And I’ve been trying to get Matt to pick up the guitar, too, live to give it even more depth! We have a great new bass player, and Paul Wilson is still keeping things steady and in check on drums. We are really lucky to have great musicians to work with and friends to boot. Matt and I are also hoping to produce and manage a new band called Kali from Leeds over the coming months. So it’s definitely busy times ahead for us.