My Enemy Complete InterView: Too Cool for the Underground0

Underground atmosphere with mainstream accessibility, Washington, DC’s My Enemy Complete introduce ReGen to their history and their sound.

An Interview with Carlo Pizarro, Brian Fasani and Bilaal Y of My Enemy Complete

Rising from the ashes of two of Washington, DC’s most revered electronic/rock bands, My Enemy Complete began life in 2008 when 51 Peg’s Carlo Pizarro and Brian Fasani teamed up with former Chrysalis member Bilaal Y. With their collective roots already steeped in hard rock and industrial/electronic music, My Enemy Complete presents a tight-knit package of industrial rock full of all the staples of intricate programming, distorted atmosphere, topped off with accessible riffs and passionate vocals; like a marriage of the best elements of Chemlab and A Perfect Circle, making it rife for underground consumption while appealing to mainstream sensibilities. Signed to Radio.Active.Music, the band released a self-titled debut EP in late 2010, produced by Dennis Kapayos and placing them in the upper echelon of the DC rock underground. Their live shows have seen them performing across the East Coast, most notably opening for The Birthday Massacre. With a full-length album in the works with Hollowboy’s Tim Phillips, Pizarro, Fasani, and Bilaal introduce ReGen to their history and their sound, hinting at bigger and better things yet to come.

Carlo and Brian had worked together before in 51 Peg. What can you tell us about 51 Peg’s dissolution and how that led to the formation of My Enemy Complete with Bilaal?

Pizarro: I think it was really just that it had run its course, and I think everybody wanted to do some different things. Jeff needed a change, and he moved to Arizona. And we still wanted to make music.

Fasani: For whatever reason, it was just over. We were trying to get another record done. Do they even make records anymore? But Carlo and I wanted to keep going. I had tried to do some stuff with Bilaal while 51 Peg was going on back in 2004 or 2005, purely electronic stuff. Being in other bands, it’s kind of hard to devote your time to a band and have much time for anything else. So we tried that out. 51 Peg ended, and Bilaal’s band Chrysalis ended. We knew he was available and how good he was.

Pizarro: We basically just called a meeting and had a sit-down, and we really just kind of looked at each other and said, ‘What do you guys think? Do you think we can do this?’ I don’t know. I mean, we didn’t know what it was going to sound like. 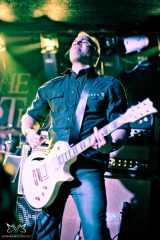 Bilaal: The strange thing is that when people come from two different bands, you never know if it’s going to have chemistry. That was the big risk to take, but it ended up working out. We had very similar ideas about where we wanted to go.

Fasani: It was also the simple fact that our respective bands had done fairly well, and we didn’t want to form this group – I don’t like the term ‘supergroup’ – of bands that did well and have it be less than what it had been before.

Pizarro: That was the big agreement that it had to be better than whatever we had done in the past.

Bilaal: In an odd way, what we were doing in those separate bands was preparing us for what we’re doing now. Chrysalis was more about slower, more melodic stuff, learning the chords and such. Fasani had been practicing, for example, how to play with electronics. Carlo had his guitar sounds, and if I wrote a riff that I was thinking about in my head, or if he writes a riff, there is a cross that works. It was really cool. 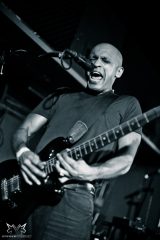 You have two guitarists in the band and no bassist, as that role is fulfilled by the electronics and the backing tracks. What is the dynamic like between you two, especially with Bilaal balancing between the guitar and the vocals?

Bilaal: It makes things really interesting, because a lot of times when we write, we write everything in multiple layers. If you listen to the CD, everything has a layer to it. For example, Brian will be playing the drums, and there will be the live drums that he actually plays, and there will be the samples layered behind it. It’s the same thing with the guitars. We have a riff, and you can play it as a synth riff or as a guitar riff or as a bass line. It really opens things up, what you can do when you have two guitar players. Sometimes one of us will play the role of the bass player. Also, it’s one less person to deal with.

Pizarro: That’s always been my thing, having one less person to deal with.

Bilaal: There is always good and bad with that. Sometimes, you just don’t get that influence, but I would rather stick with not having another person to deal with.

Pizarro: To be honest, the most commonly heard phrase to come out of a bass player’s mouth among those I’ve played with has been ‘I can’t hear myself!’ And it’s like, ‘Well, tough shit, buddy! You’ve either got to get a bigger amp or try something else. I’m not downsizing for you.’

Bilaal: Another dynamic that’s interesting now is that we’re exploring songs with one guitar, where essentially instead of me doubling up with Carlo, we can have a synth doing the same riff in the background or another interesting sound. We have this kind of interaction.

Now, Bilaal is responsible for the programming and synthesizers, correct? 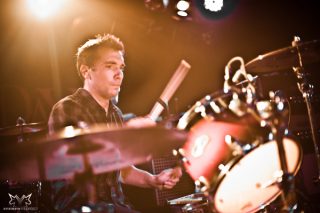 Bilaal: Most of the time. Brian knows about all the drums, so he’s really more of a percussive adviser. It all goes through him, like ‘Does this sound work?’ and that sort of thing. It’s a fun collaborative process.

How about the lyrics? How much of that is written by you and how much is shared among the band?

Bilaal: I spit it out to these guys, and sometimes they’ll mull over them to see if they make any sense. On the first EP, the lyrics were very free association, and then seeing a lot of times if it would make sense. It was more cerebral, but with the newer material, it’s a little more straightforward, because once again we want to communicate better. I also think emotionally, it’s a little more opened up. On the first EP, I don’t want to say it was detached, but it is a little distant, more observant. The new stuff is a little more upfront. We don’t want it to be insincere.

Electronics are becoming more prevalent in mainstream music, and your sense of melodies and song structures has a very accessible and somewhat mainstream sound, although the production sound is much more underground. Bilaal’s voice even sounds somewhat similar to Maynard James Keenan. What is your perception of this dynamic as it pertains to your music?

Bilaal: I love the fact that when people compare my voice to one person; then it closes off to the other people I’m ripping off. You don’t know just how much I’m ripping off Suicide Commando. The voice is just another instrument, though, and if more people are into it, then that’s cool. We’re going to keep on doing what we want to do, and as long as we’re making an impression and making music that communicates better with people, then it’s a good thing.

Fasani: We want people to be into our music. We’re not one of these underground bands that are so…

Pizarro: ‘We’re too cool to be popular.’

Fasani: Yeah, exactly. We don’t want to be underground. We’re not going to go out of our way just to try to please people, but we want to do…as Bilaal said, we want to do whatever communicates to the masses the best.

Pizarro: We want to reach a lot of people.

Fasani: Being in the underground sucks!

Bilaal: It sounds cool, though.

Pizarro: Yeah, it’s cool, and it sounds cool, but we’re not that cool.

My Enemy Complete formed in 2008, so how much of the material on the EP and that you have been playing live stemmed out of your previous bands?

Pizarro: I would say zero.

Fasani: Yeah, none of it.

Pizarro: That was our whole thing when we got together, asking what are we going to sound like? We knew we did not want to just sound like one of the bands or some combination of the two.

Bilaal: And yet, the spirit of what we learned in those past projects comes out in everything we do now. I learned a lot from the guys in my last band. I learned a lot about production and songwriting, but a lot of that was stuff that I had been working on electronically apart from that band for like five to eight years. That’s where we started working on stuff, and I still have some of what we worked on, and we didn’t even try to force some of that into this. We wanted something fresh that everybody felt right about. It’s not a solo project. It’s not a rehashing of anything. More importantly, it works out of what’s going on with us right now.

Fasani: That being said, everything that we did that was put on the EP came out of the first eight to 10 months of what we worked on. I don’t even think that what we come up with next will sound like our EP. It’s going to be, hopefully, taking things to the next level.

Pizarro: It was a starter kit. 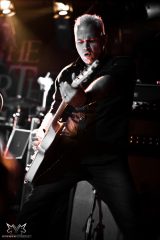 But one of the trends that we do want to follow within the band is that we do want to communicate better and hopefully simplify things a little bit. We’re lining stuff up instead of having 10 or so counter-rhythms going on. We’re doing this thing now where you hear different intros on the CD than the intros you would hear live. When you’re listening in a car or headphones, it’s a different atmosphere, because you can listen to all the little details. Live, you don’t get any of that, so we’re trying to simplify it for the live feel.

Speaking of the live show, your performance is really tight, but you play more material live than you have on the EP. Where do you see the new material you’re working on helping to take the live element to the next level?

Fasani: Well, we always have the live set in mind when we’re writing a song, because it’s always got to be played live. Lots of times, something will sound good within the electronic realm, but when we play it all together, it comes off as really stiff. It’s always got a groove.

Pizarro: Yes, it’s got a groove, and the people have to immediately feel it when you play a show. You have to be out there connecting and getting them just to even bop their heads, because that just adds to the atmosphere.

You have the EP, and you are working on the new album. What’s the next step for My Enemy Complete?

Pizarro: We want to play more shows and get out there to more people. I still feel like we’re still kind of new in the sense that people don’t know we’re around.

Fasani: As long as we’ve been around, we’re still new.