With an upcoming appearance at this year’s PIGFest 3.0, Seattle’s Murder Weapons stands poised to make waves well beyond the Pacific Northwest. 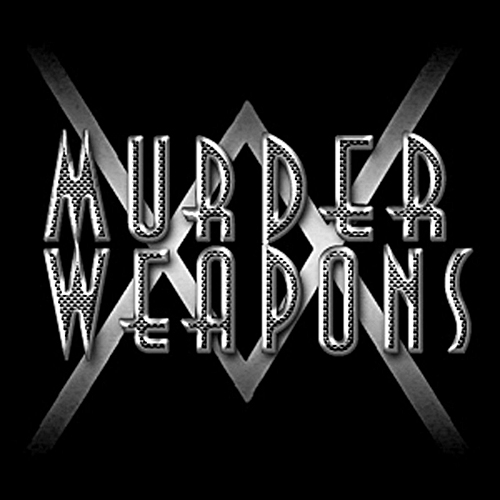 An InterView with Dawn Woodkill & Jesse Razorr of Murder Weapons 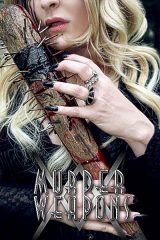 From Seattle comes Murder Weapons, and the name is certainly appropriate as the band presents a sharpened shock/rock concoction that blends elements of goth, industrial, metal, and whatever else the band sees fit to infuse and abuse. Headed by composer Jesse Razorr and fronted by the sultry but soulful voice of Dawn Woodkill, the band has been steadily making waves in the Pacific Northwest performing a series of shows high on volume and vitriol; Murder Weapons has opened for the likes of Combichrist, Davey Suicide, SKOLD, DOPE, Angelspit, My Life with the Thrill Kill Kult, The Birthday Massacre, Psyclon Nine, and more. Having released the debut Guilty album in 2015, the band has been gradually honing its craft with plans for a new release in collaboration with electro/EBM artist X-Fusion, as well as an upcoming appearance at this year’s PIGFest 3.0, co-sponsored by ReGen Magazine and featuring the best of the Pacific Northwest goth/industrial scene! Razorr and Woodkill now speak with us about the band’s musical background, the development of the live show, and what new thrills, chills, and blood spills audiences can expect from Murder Weapons.

Murder Weapons will be performing at this year’s PIGFest 3.0; tell us about the development of your live show, what audiences can expect to see, and how things have progressed from when the band first began?

Razorr: In the beginning, there was only blood. Now that we have become more proficient, it has evolved to include cannons, glitter, and severed body parts. A projector displays horrific images synchronized to the music and can require a strong stomach. Keeping your eyes in one place on the stage is not recommended, for the band knows how to move around and will get right up in your business.

The band released a gory and dark video for ‘Hive,’ created by Tetraknot. Tell us about the video, how the visual conception came to be and how you feel it relates to the song’s lyrics and themes? In what ways do you feel it’s representative of the band visually and as far as the live show?

Razorr: Tetraknot provided an amazing location at the Georgetown Steam Plant near Boeing Field. We spent an entire day there, as well as a night at another location, filming the messy bits with fire and blood. As the song says, ‘Don’t look behind the scenes/there is no order there,’ and we took it to heart. There is no message in the video itself; our goal was to embody the spirit of our live show. 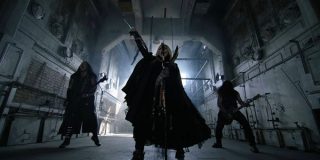 Woodkill: I definitely feel that the video worked out to be a very close representation of our live show. Jesse and I really struggled trying to come up with a storyline to precisely mimic the song lyrics. Then as we worked with Asher and Kevin (our good friends from Tetraknot), we realized that the video was better suited to represent us and not portray every line in the song. A video is only what, four minutes? (Laughter) It is super challenging to tell the complete story in four minutes. The song ‘Hive’ is actually in angst of society and politics – the hive mind of a scene, a region, a country when it is toxic is truly terrifying. It always starts out with the best of intentions (supposedly), then you wind up with fascists and discriminatory behavior. In every era of history and even on a small local scale, there is some ridiculous example.

If one were to look at the band without hearing the music, one might mistake Murder Weapons for a metal band along the lines of Dimmu Borgir or Cradle of Filth (that’s not intended to be disrespectful), and with so many genres cross-pollinating these days, what are your thoughts on how audiences are perceiving/absorbing music? Is there any relevancy to ‘genres’ anymore; how important do you think they are to people now – both musicians and fans? 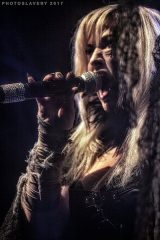 Woodkill: I have learned a lot about sticking too close to a genre. I have done classic rock, top 40/cover music, grunge, metal, EBM, darkwave, and now… well, uh… ‘shock rock/industrial horror.’ (Laughter) I enjoy many genres of music. I grew up singing gospel and southern rock. I have always loved raspy power vocals. Pamela Moore from Queensrÿche is my vocal coach and mentor so my voice has been honed to my style. When I first started with Murder Weapons, it didn’t go over so well. The band and some of the typical ‘goth’ fans thought I was too rock, too glam, too gospel. But, as we gelled as a band and the more and more young girls would come up to me at the end of a show thanking me for being a voice for them as a powerful woman, I started telling the naysayers to piss right off. We are welcomed best in the metal scene, but honestly, cross the lines of genres. Some may be a little turned off by the gore and some love it. It’s art. We appreciate everyone who supports us. I try to get out and thank every single person at every single show. It means a lot to us.

Vocally, you bring a lot of depth to the band’s sound – very bluesy and soulful, but also aggressive and with a lot of bite. Tell us more about your own musical and vocal background and what you feel you bring to Murder Weapons? 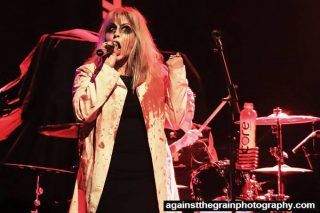 Woodkill: Well, as mentioned before, I grew up singing gospel… IN CHURCH! But the cutest story is how I started singing. When I was a little girl living in South Carolina, a group of nitwit girls were doing a dance routine for an elementary school talent show. I was the typical ‘test the limits’ kid and I got in trouble. My mom cut my hair short and when I went back to school, those little girls said I looked like a boy and wouldn’t allow me to dance with them. I went home mortified and my parents told me to just sing. My dad had a collection of Elton John records and I loved the song ‘Your Song’ because my dad played it all the time. I had already memorized the words, so singing it was a piece of cake. Needless to say, I was grateful not to be dancing with a bunch of unmemorable girls. The response was great and I never stopped singing after that. I sang in a high school rock band, then after college, moved to Seattle and did the grunge band thing. (Laughter)
I have sung just about everything. Pamela Moore was definitely a turning point for me. She helped me embrace my voice and helped develop my power vocals that would later be called by Steve White (KMFDM, 16volt) as ‘throaty broad’ vocals. (Laughter) 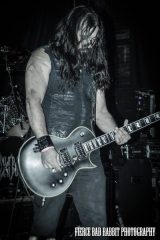 How about Jesse? Tell us about your background and what you bring to Murder Weapons?

Razorr: My first exposure to music was the folksy stuff my parents played. Until about 2007, I was completely analog. If I heard electronic sounds in music, I assumed it was being played. When I saw a band in Seattle perform using backing tracks and instruments, my mind was blown. You’re allowed to do that? It sounds stupid in retrospect, but there it is. I started learning to program music after being shown the basics, and listened to a lot of different artists. Murder Weapons is the culmination of all those things. I like a lot of different styles and I think that shows in our songs. In the beginning, I put a lot of sounds in the track; over time, I’ve used less and less so there’s more room for the instruments and vocals.

What about the songwriting dynamic between you two?

Razorr: I come up with a song at home, then I’ll bring it to practice. The band will listen and bat around concepts, killers, words. Dawn will listen to us practice it as she writes lyrics, and as she gets parts down, she’ll join in. Everybody makes suggestions until there are none more to make as the song is practiced over and over and over. And over.

Woodkill: We definitely have a distinct goth scene and metal scene here. I like to see the two come together. We tend to bring out fans of rock, metal, punk, horror, and gothic. We kind of left the exclusive goth scene because we evolved in sound and songwriting. The club we most enjoy playing at hosts all kinds of shows. Although we have shared the stage with SKOLD and Combichrist, we have also shared the stage with Michale Graves. I welcome playing more of a variety of dark genres. I’d love to do rave remixes of all our songs and play a live festival show like that. 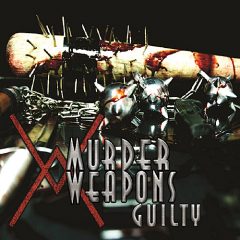 Your last album Guilty was released in May of 2015; how has the audience response been, and what do you feel you’ve learned since its release that is being applied to the new material you’re working on?
When can we expect to hear some new music from Murder Weapons?

Woodkill: We have had a great response to that CD, but we have had some member changes and really loved the remix that X-Fusion did for us a few years back. We have some new tunes we are working on recording with X-Fusion doing our mixing/mastering because he actually gets our sound and can bring it to life perfectly.

Razorr: Originally, Murder Weapons was a wall of noise with dozens of things happening in a track. Over time, it has become a carefully selected handful meant to complement each other in the best way possible. What has not changed is how it doesn’t fit into any one genre. People still have trouble defining its sound, and that’s our goal. I want people to hear it because I think there’s enough diversity in our tracks to satisfy a multitude of musical tastes. If they don’t like us, at least they gave us a chance.

What’s next for Murder Weapons?

Woodkill: We are recording new stuff and excited to play PIGFest and are in negotiations for another ‘comeback ’80s band’ opener slot in Seattle. Our number one goal is our music in film/TV. We also love to do some collaborative things and have some remixes done by some of our beloved heroes and friends in the industry. I know Jesse wants to tour the world. 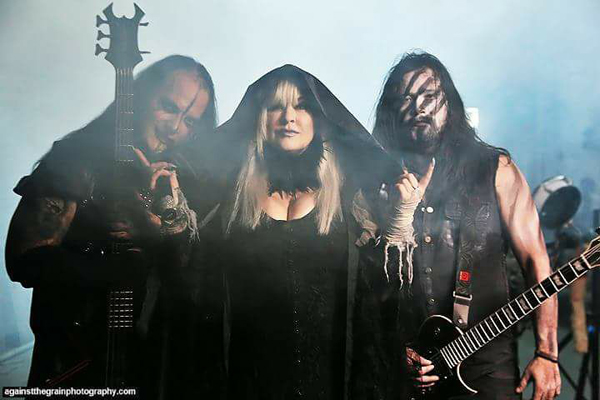