Claus Larsen speaks with ReGen Magazine about his nearly three-decade-long career as one of the EBM scene’s most prolific and exciting artists.

An InterView with Claus Larsen of Leæther Strip

One of the EBM genre’s most celebrated pioneers, Claus Larsen has been guiding Leæther Strip across nearly 30 trailblazing years. Initially one of the early acts on the legendary Zoth Ommog label, his music has not only been licensed and released via such well renowned labels like Metropolis, Cleopatra, and Alfa Matrix, but has been heard on dance floors around the world, with fans heralding Larsen’s aggressively straightforward yet highly emotive brand of electrified EBM. His lyrics delve deeply into the darker aspects of the human psyche, touching on political strife, extreme sexuality, destructive conflict, and those qualities that make us human. With the 2016 release of Spæctator, Larsen brings the sound of Leæther Strip back to its roots, signing to eminent Italian industrial label Rustblade and reminding listeners just what it was that first endeared us to the band in the first place. During a brief respite during his recent mini-tour of Australia, Larsen took the time to speak with ReGen Magazine‘s Brian McLelland about the development of his latest album, touching on the turmoil Larsen faced from his family as a young man and how those experiences, along with his love for husband Kurt Grünewald have shaped him into the man he is today, plus a few hints about what’s yet to come from one of the EBM scene’s most prolific artists.

This album is slated to be a ‘return’ of sorts to some of the classic Leæther Strip elements. How does it feel to retread ground that you’ve covered before? Do you think that you’re able to bring something fresh and new to it? 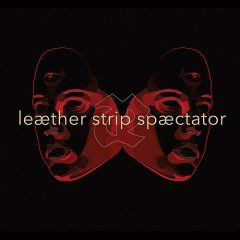 Larsen: It feels great. It’s not really something that I planned; it kind of just happened. In the sense of production and sound, I feel that I have always been old school-ish in my sound, and I am still very much inspired by my heroes growing up. I learn with every song I write and it’s kind of cool to take what I’ve learned up to now and use that knowledge going back to basics with a fresh approach. It’s the Leæther Strip I know best, as it is with the people who have followed me for almost 30 years now. The freshness is mostly in the lyrics. I now have a lot different things on my shoulders than I had in my 20’s.

What prompted you to revisit this sound? What kind of experience was it for you to record an album like this?

Larsen: I am sure it was the death of my mother. After my dad died, my mom was the last link for me to my family, a family who I can’t really say much good about. Her death brought a lot of suppressed memories back to me, dating back all the way to my early childhood. And many of the songs are out those memories about feeling pushed away and never really feeling like I had a role in that family. That is also why the title of the album is Spæctator. I kept fighting for their love and respect all these years and her death just broke those chains, so it was very liberating to finally get all that pain out of my system.

In what ways do you think Leæther Strip has moved away from this sound? 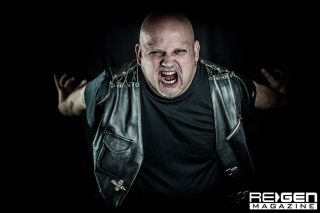 Larsen: It’s natural to evolve as a songwriter/producer. I feel that my listeners know very fast if a new song they listen to is one of my songs. But I am very hungry to learn and I love experimenting with new sounds and ways of production styles, so the sound is bound to change over the years in some ways. It keeps me going. The hunt for that perfect song is a strong force in me I guess.

Are you happier with this sound compared to some of the directions you’ve tried in recent years?

Larsen: I wouldn’t say happier. All my songs and albums are like footsteps through my life, and they all deal with issues that were important to me at the time I composed them. It’s a natural process.

Is there a particular song on this album that you enjoyed making more than others?

Larsen: Yes – ‘White as Chalk.’ For me, that is the most important song I’ve composed so far. I wrote it just after my mother passed away. It’s a song explaining to my mother how I felt as a kid; a very personal song, but it was a song that I needed to get out of my system. It was also the hardest song for me to record. I broke down several times during the production. A good friend of mine, Roland Danielzig is working on a video for it at the moment for release early next year.

‘Same Old Shit’ seems a bit apropos on an album that promises to revisit the classic Strip sound, what prompted that? 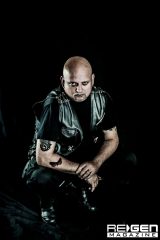 Larsen: That song is really about how we are creatures of habit… like wanting to hear the DJ play the same songs over and over again every weekend. I mean, yes ‘Headhunter’ is an amazing song, but do you have to fucking play it every night? Or having to deal with the same issues and fights with friends or family, or having the same lies thrown at us by leaders and politicians every damn day. Sometimes life just feels like being stuck in a merry-go-round that just won’t stop. It’s almost as if we enjoy dealing with the same shit and not learning from the pain it caused us in the previous shitstorm. I am just like that myself and it just pissed me off that day I wrote the song.

What’s the story with ‘Luc Van Acker?’ Do we want to know or do you want to tell us?

Larsen: First off, I got my friend Luc’s permission to release it before it made the track list. It’s a song inspired by a backstage experience I had supporting Revolting Cocks back in ’91 in Copenhagen. I doubt I need to explain further. Oh the good old days. It’s all just good fun and Luc loves the track.

I know that Kurt’s health problems had an impact on the recording of this album. Would you mind telling us how? What influence has Kurt had on Leæther Strip over the years? 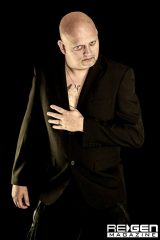 Larsen: Without Kurt, there wouldn’t be any Leæther Strip and probably no me either. He is my everything and he supports me in every way he can. Sadly, he can’t go outside the EU anymore for shows and that’s very hard on us both. We love playing shows together and meeting all these amazing people all over the world. Yes, his health problems have, as in any family, a huge impact on how we live our lives. I would give my life for him to get well again, and hopefully, I will be able to give him a kidney soon – the one he should have gotten two years ago, but he got a stroke two weeks before the transplant was scheduled to happen. My songs are mostly all about my personal experiences and the people around me and yes, he has a part in many of my songs, also on the new album. We both feel a need to share our situation with others in the same situation. Chronic illness has this evil way of pushing people away, just when you need them the most. We have nothing to hide and we don’t give a shit about what people think. If our experiences can help just one person, how dare we crawl into a hole and hide?

The 30 year anniversary of Leæther Strip is in sight. How does that make you feel? What sort of plans are in place to celebrate such a momentous landmark?

Larsen: It gives me great pride. Not many artists have been so lucky. I am also very honored to be a part of a scene with so many amazing and passionate people involved. I still get to do what I love and people still want to listen to my songs and see me go nuts on a stage. I owe so much to the people who keep supporting Kurt and I. It’s also a huge ‘fuck you’ to all my teachers and family members who pushed me away just because I was different.

What do you feel you have yet to accomplish for LS with regard to your original intentions/visions for the project?

Larsen: My hunger and passion is just as strong as when I was 21. I will do this until I drop. There are so many songs to be written, and I have never been more inspired as I am now. Gig wise, 2016 has been the busiest year in the history of Leæther Strip, and we already got lots of new concerts bookings and a possible US tour in sight for next year. It’s all I know, and all I want to do. If people want us, they got us.

What comes next for you? 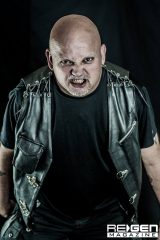 Larsen: I just played on a mini-tour of Australia and one in Japan with Die Krupps. I love Australia and the people in it; such a beautiful, loving, and friendly country. The rest of the year is mainly gigs and the album release. I’ve got shows in the US, Europe, and South America. John Mirland and I also got a new Am Tierpark EP out in December titled Cherry Blossom and our second album is also recorded for a later release date. I am also working on a Leæther Strip EP for early next year, and the next Strip album is also in its early stages.