South African artist Thomas Mark Anthony speaks with ReGen Magazine about the culmination of his Terminal debut album, signing to Metropolis Records, and continuing to fight against prejudice and bigotry through music.

An InterView with Thomas Mark Anthony of Terminal

From South Africa comes Terminal, the electro and industrial/rock band helmed by one Thomas Mark Anthony. Signing to Metropolis Records and releasing his long gestating debut album, Blacken the Skies, the songwriter and multi-instrumentalist presents an outlet for his lifelong devotion to social justice with a sound that owes as much to the extravagance of glam-laden goth/rock and post-punk as it does to the abrasive sociopolitical angst of the early industrial scene; all of this culminates in a sophisticated collection of songs that are as lyrically engaging as they are musically varied. Emphasizing “quality over quantity,” Anthony keeps Terminal’s sound concise with tracks that remain close to the four-minute mark, all the while drawing on his experiences as a civil rights and anti-apartheid activist and building on the tradition of bands like MINISTRY and KMFDM with just a hint of VNV Nation thrown in. Speaking with ReGen Magazine, Thomas Mark Anthony provides us some insight into Terminal’s history and methods, leading up to the Metropolis signing, the formation of his live band, his thoughts on a world where the ills of prejudice and bigotry remain a virulent threat, and what the future holds for the band to finally perform live in the wake of the global pandemic.

Your new album has just been released via Metropolis Records in North America. First of all, would you tell us how you came to sign with this eminent label?

Anthony: I guess it was the usual way – I submitted some material, I got rejected, but received some good advice, I came back a few years later with a more coherent vision. I did reach out to a few labels this time around and was in discussion with a couple of them, but when you get an offer from Metropolis, that’s kind of decision made. You want your music in the same catalog with Die Krupps, Front 242, KMFDM, et al.

Secondly, with the album now released, how do you feel about the audience response so far? 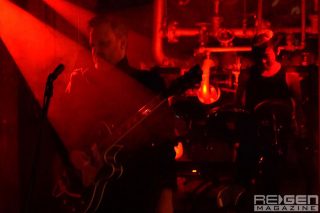 Anthony: I am immensely grateful that the music has found an audience, and I could not be happier that people connect with it and listen to it and that the reviews have been so positive. There is this additional layer of feedback that is really interesting to me as a musician, and that is finding what sorts of influences people hear in Terminal and where it exists within the breadth and history of EBM/industrial and dark music in general. I’ll put in a guitar riff that I think is shamelessly derivative of Marc Bolan from T. Rex, but a reviewer will find it reminiscent of The Sisters of Mercy… and I am forced to step back and realize, yeah, there is clearly a glam influence on goth and I’m obviously not the first person to connect those dots.
I did borrow from various genres adjacent to industrial – synthpop, techno, and in a couple of places maybe nü-metal – and it’s great that listeners pick up on that and appreciate it. The idea is to explore different musical territories with the sound while maintaining the essence of what makes it Terminal.

Terminal’s lyrics deal with very relevant social and political topics, and you have a long history of being anti-apartheid and an activist for civil rights. Being from South Africa and now living in Canada, what can you tell us about the evolution of your views to culminate in your music? What sorts of personal experiences that you’re willing to share with us helped shape your outlook? 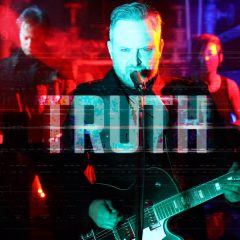 Anthony: I lived in the Ottawa area for years, but I’ve actually been in the U.S.A. for quite a while now. One striking contrast is how the police are regarded by the general population. South Africa’s police were (and still are, to some degree) notoriously brutal and heavy-handed. Then you have Canada, where every kid wants their picture taken with an RCMP officer. The United States is somewhere between the two extremes. You learn a lot about a country from observing its police because they are the public’s primary real-life interaction with their government and its laws and morals.
I was a civilian employee of the South African National Defense Force; I mean, imagine someone telling me what to wear and what time to get up every morning.
The unfortunate reality is that South African apartheid may have ended on paper, but apartheid still exists in this world. You see people victimized by the injustices of it, it creates a visceral urge in you, and you respond one way or another. The way I respond is to write something like ‘Godfire.’

In the age of social media in which everybody has an outlet to share their opinions, no matter how erroneous or misinformed they may be, it does feel (to me) like there are more people saying things like ‘stick to music’ along with musicians feeling it’s not their place to ‘tell people what to think’ by engaging in political discussion of proselytizing.

Anthony: There is a sort of irony in that most people who say ‘stick to music’ are not paid for their opinions either, but they are comfortable airing them. As they should be.

What do you feel are the responsibilities of an artist, musician, actor, etc. to engage in political discourse? 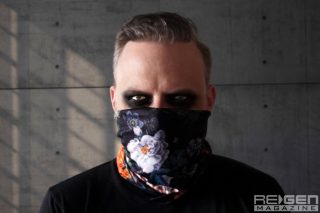 Anthony: I mean, taking on big issues in music is a really old tradition, dating back to Shostakovich during World War II and Verdi nearly a century before him. I don’t believe anyone wants to be told what to think, but few artists probably actually do that. My approach is generally more of an ‘I paint what I see’ and as an observer the morality of the subject is either going to be self-evident or it isn’t. ‘Dance Fall Pray’ looks at a cycle of tragedy that seems unbreakable – we’re complacent, there’s a mass shooting, we send thoughts and prayers, we normalize it, rinse and repeat. I don’t pretend to have the solution, but I’d hope everyone agrees there should be one.
A song like ‘Needle Park’ tries to take on an issue from every possible perspective. Governments, often with the very best intentions, will take actions to try and stave off one societal ill at the risk of enabling a lesser one. Are needle parks morally right? Do they do more good than harm? I really don’t know. Politicians, religions, doctors, and people caught in the teeth of addiction will all probably have different answers.
That said, I also kind of subscribe to the Hunter S. Thompson school of thought that says anything amoral, shoddy, dangerous, or rooted in greed deserves to be excoriated with the strongest words possible.

The live band includes drummer Jessica Choi and keyboardist David Ross Phillips. Can you tell us about how they came to be part of Terminal’s live band, and how you feel they help to bring your sound and vision from the studio into the live environment? 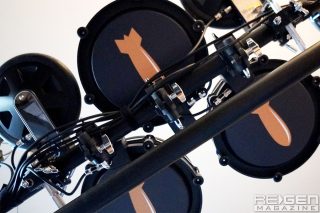 Anthony: Dave and I have worked together on music for many years and continue to collaborate on all kinds of things on a regular basis. So, he understands where I’m coming from and his input has absolutely influenced what Terminal ultimately became. Jess came onto my radar as an experienced touring player for groups in various genres. You see her in action, and you want that energy in your show. I’m fortunate in that they’re both really cool people.

Are they, or will they be at any point, involved in the studio recording or writing?

Anthony: I don’t know if it’s the recording process in general, or if I’m particularly tedious and difficult to work with, but they’ve both made it clear they want no part of it. (laughing)

You’ve expressed a very direct approach with your songwriting style, particularly with regards to your lyrics – ‘If you can’t say it in four minutes, it’s not worth saying.’ Although this allows a certain economy of songwriting (Mike Campbell of The Heartbreakers once said, ‘Don’t bore us, get to the chorus’), is there ever a concern that certain aspects of what you’re trying to say get lost or distilled in such a process? 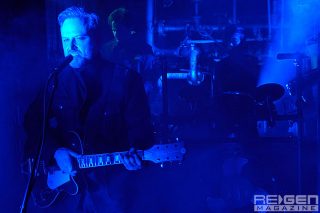 Anthony: That’s a great quote, and probably one of a very few times there’s ever been a Heartbreakers reference on ReGen.
There are plenty of great songwriters operating in this space, but it’s really common that I’ll get to the end of a track and not know what the song was about. Or maybe I won’t make it to the end because at the six-minute mark, I was ready to move on and skipped ahead. So, there’s certainly been a conscious decision to go for quality over quantity, but admittedly, I have ADHD and that may be a factor. One reviewer observed that Terminal songs often end abruptly. I could probably make them each 20 seconds longer by doing a repeat and fade-out at the end, but I’m not trying to lull anyone to sleep here.

Terminal released its debut music video for ‘Deadline’ in October. Are there more videos in the works?

Anthony: There will be at least one more from this album. Right now, the shape of the pandemic is changing so fast that it’s hard to predict even a month out what will be practical to do. Which, frankly, is better than where we were a few months ago, as long as you aren’t trying to plan anything.

On a similar note, livestreams obviously don’t hold the same power as a live show, but they have become part of the norm due to the current crisis. What possibilities do you foresee for live music to survive or evolve in the wake of the current situation?

Anthony: It’s kind of sobering to think this, but other countries have known for a while that the current pandemic will not be the last one. We’re all learning how to make good art and entertainment under these kinds of limitations, and eventually – hopefully later than sooner – that knowledge will be relevant again.

To what extent does this apply to Terminal? You’ve said that you plan to resume live shows once the pandemic restrictions are lifted, but in the meantime…? 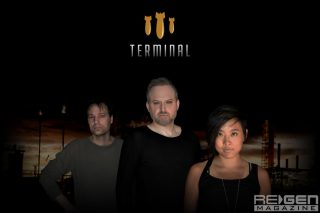 Anthony: We’re preparing for a livestream event in May right now. Admittedly, Terminal has not exactly been at the forefront of this, but I wanted to look at ways in which the livestream isn’t just a show without a live audience. There are some advantages to this kind of performance; you have an opportunity to bring the viewer up close and at the same time you can play in locations that would be acoustically difficult. These are the sorts of parameters we’re considering as we try to do something memorable for the fans.

What’s next for you and Terminal?

Anthony: I am working on a couple of remixes, which is an extremely interesting challenge; it takes a combination of arrangement and production to imprint ‘The Terminal Sound’ on someone else’s music. As you’d expect, both remixes are on their way to being way shorter than the original tracks.
After the May event, we’ll optimistically focus on getting the live show ready for fall performances of whatever scale will be possible. It’s immensely satisfying to look at the analytics for Terminal fans and to find out they’re located all over the world and live in some extremely cool places. We can’t wait to get out there and meet them.