David Thrussell continues his campaign against consumer, corporate, and capitalist culture as he speaks with ReGen about the development of his newest SNOG album.

An InterView with David Thrussell of SNOG

For three decades, David Thrussell has been a singular force against consumerism, corporatism, and capitalism, with SNOG as the primary soundboard. Fusing numerous styles under the umbrella of experimental electro/industrial, each new album under the moniker has been an exercise in cultivating social and political discord, challenging big governments and the means by which they consume the human spirit for nefarious ends, with the 2020 release of Lullabies For the Lithium Age being but the latest outing. Coming a full five years since the last album release, Thrussell’s message remains as virulent as ever, and ReGen Magazine is happy to have had the opportunity to pick his brain about the ideas that have motivated him since youth; here, he speaks about the process of returning to SNOG after five years, the evolution of his ire against totalitarian and authoritarian regimes, his fascination with the assassination of John F. Kennedy, and his thoughts on the next step for mankind to break free from the shackles it imposes on itself.

Your five year hiatus was referred to as a semi-retirement. What was it that prompted the initial hanging up of your hat, and what was it that spurred you back into action? 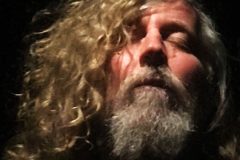 Thrussell: As the vast planets ground on their endless axes and the infinite Orrery spun imperceptibly, I took a moment to ponder our place in the silent, electric universe. That fleeting moment was five of your Earth years and I returned with new guidance and a new purpose. During long sessions of personality deconstruction, my therapist Dr. Ian White observed that I must present the world with a gospel album – a grand statement of spiritual renewal fashioned as sedative and meditative electro-dirge – a jaded kirtan for the transhumanist marionettes we all are.

Lullabies for the Lithium Age has a very different feel to it than your previous work. A lot of the same themes come up, but as the title would suggest, it feels more mellow. Was that the desire from the start, or was this more a side effect of your personal growth and time away from the project?

Thrussell: As the human soul slides into extinction, the most compassionate course available is to chart the soul’s passing with gentle hymns to help guide us into that dark night of totalitarianism and the technocratic state. So, as one would sing a baby to sleep, we whisper our lilting lullabies into the wilting ear of the herded and hypnotized population. We sing and bring good news to the flock – imbibe the sweet, sweet treacle of surrender; for the end is nigh and you must tread the nine circles of the Divine Comedy alone. Fear not, though unspeakable torments await as our lord AI melds us into the automated Man-Machine, though we grind through the eternal Spätzle Machine of Cosmic Indifference… we shall be reborn as Galactic Dust. Stardust – to orbit forgotten moons as glacial time relentlessly pushes on. This is our only and best hope.

Throughout your career, your albums have seemed like you’re playfully jabbing a stick in the eye of our corporate overlords, but with Lullabies for the Lithium Age, I personally feel like there’s a profound sadness under the surface here. Did you come at this album with that in mind, or do you think this might be more of a projection by me as the listener with our current events? 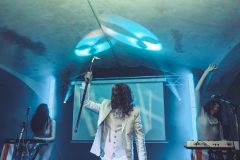 Thrussell: To walk this fallen world is to be awed by both beauty and melancholia – the beauty that radiates from all creation and the desperate sadness that blights the prison ship as it crashes against the inevitable rocks. To tread this mysterious ground, not knowing from whence we come and to whence we go, this tristesse animates the animus, goads the gifted, and propels the publicus. Perhaps there is an element of precognition, as we swoon under the grip of the eternal tyrants – their suffocating grasp tighter than ever – the river of time signals our distress both into the future and into the past. For some, we have seen this coming for a long, long time. While we save the seeds, the ocean of ignorance swells and laps at our feet – knowledge and knowing perhaps soon to be lost into the white noise of technology: mental, spiritual, and physical enslavement.

You’ve basically been decrying the coming corporate ownership of the human soul your entire career. Seeing the current state of the world, and the unabashed consumerism that’s run rampant across the globe, do you find yourself going, ‘I told you so,’ or ‘Why didn’t you listen?’

Thrussell: There is no disease except for the disease of the mind, no infection save the infection of unquestioning obedience. The hivemind spreads the contagion of fear and thus the servitude/multitude remain on the plantation. We are the ultimate Stockholm Syndrome generation, in thrall and in desperate affection and affliction with our masters – in simpering love with those who have kidnapped our souls and ransomed our futures. Being one small, breathless voice against the crashing tsunami of insanity gives me no joy, no respite, and no comfort. Indeed, as Étienne De La Boétie said in The Politics of Obedience, ‘The fundamental political question is why do people obey a government? The answer is that they tend to enslave themselves, to let themselves be governed by tyrants. Freedom from servitude comes not from violent action, but from the refusal to serve. Tyrants fall when the people withdraw their support.’ And yet serve we do – unthinking puppets in a shadow pantomime, with the world as our stage and the universe our audience.

For the song ‘Lee Harvey Oswald,’ you take a very sympathetic view towards one of the most vilified men in American history. What spawned your fascination with the man?

Thrussell: As a young boy of five or six, I sat one day with my father and something came across the television portal about the ‘sole assassin of President John F. Kennedy: Lee Harvey Oswald.’ My father, an educated and sympathetic man, released a torrid breath, ‘If you believe that, you’ll believe anything.’ Since that moment, I was always curious about the event. What happened? What did it mean? And why? So, as the years sped by, if anything about the Kennedy assassination caught my eye, I would digest it. Over the decades, I read perhaps 40 or 50 books on the assassination, and I noted the corporate media’s labored indifference and smothering and unquestioning stance. I read fine volumes by James Douglass, Vincent Salandria, and Michael Collins Piper. Later, I met people who knew Oswald, Jack Ruby, and Officer Tippet. I walked the same ground as them and breathed the same air. While the details remain (deliberately) elusive – intelligence operations are like onions, constructed from many layers of deception and distraction – to my mind, there were many tragedies that terrible day of November 22, 1963. But perhaps the least discussed tragedy was that an innocent man, Lee Harvey Oswald, died, casting a painful shadow over his children and future generations, while the assassins scattered to the winds (and their fates), and the world never knew of one blighted man’s final moments and final secrets.

You’ve tackled the subject of death and our place in the universe before, but it seems much more prevalent on this album. Has your own mortality been on your mind lately, or has it more been the mortality of society at large? 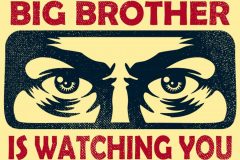 Thrussell: The great wheel turns, our time comes, and our time goes – snuffed out and returned to the dust, to be born again as a celery stalk or an alpaca… or to be the wandering few, the dust that migrates over the eons, clogging the cart of an overworked farmer, or traversing the moons of Jupiter. We are small, we burn brightly and briefly. Alles in allem, alles auf einmal. death looms over us all – death of the soul, the spirit, and the husk. Death of the animating spirit might soon be upon us as technocrats and two-cent dictators herd the cattle into digital pens, captured by an Occult Machine that frightens and devolves us through alchemic transition into base metal, a faceless, dystopian mass.

What’s next for SNOG? Is this the first of more to come, or do you plan to take another break?

Thrussell: We are but ciphers, selfless soldiers, marching monks returning to the monastery for further instruction, devotional learning, and to await more combat on the spiritual plane – a ragtag army of drifting troubadours, incandescent hobos humming an atonal lament to distract the hooded, dreaded pied piper as he leads the village children toward their doom. We lay in prayer and await our orders from the ether. We know neither the time nor the place. But we are ready. 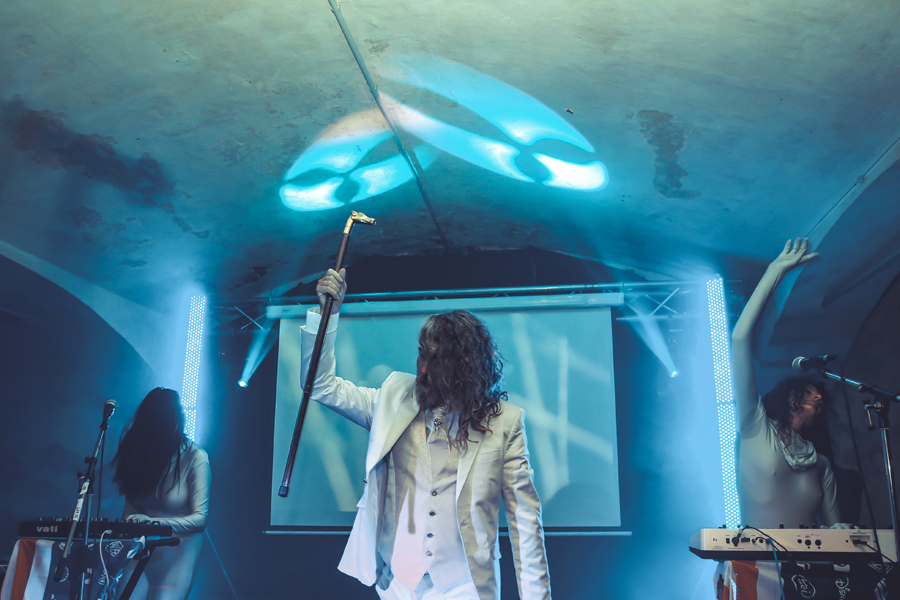 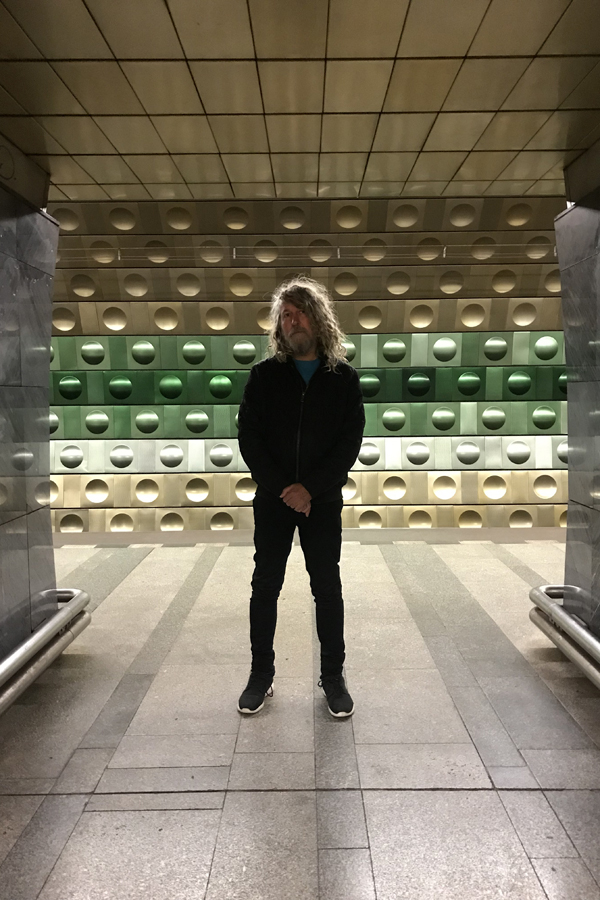 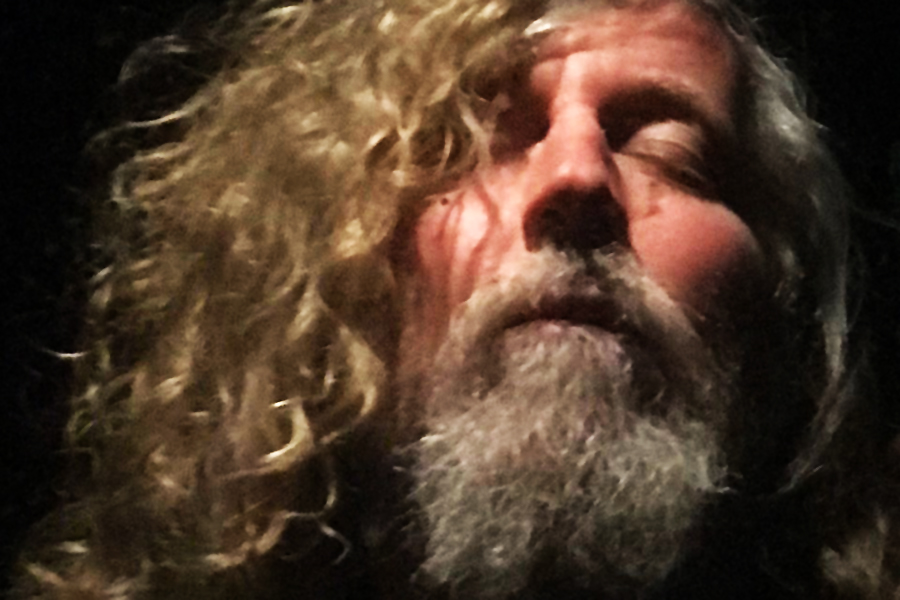 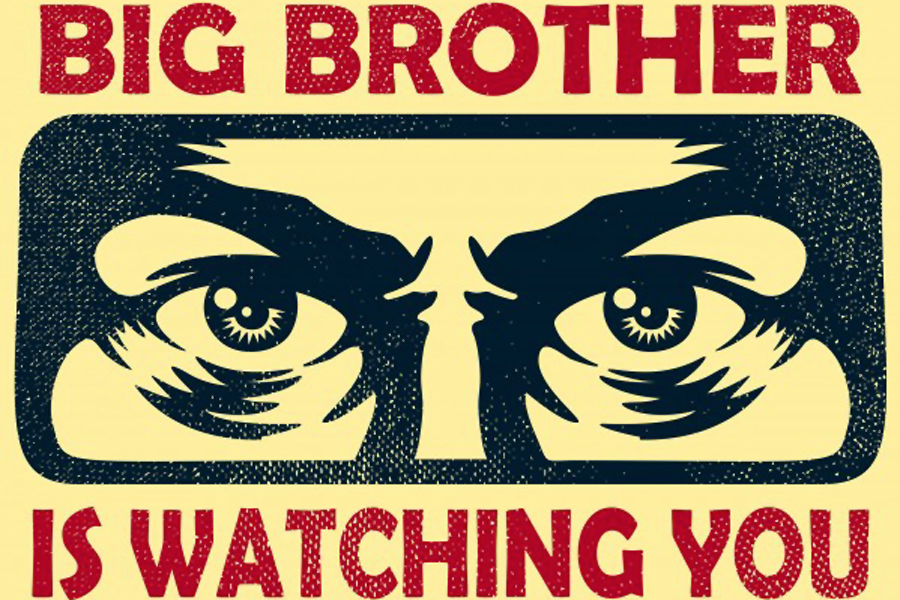 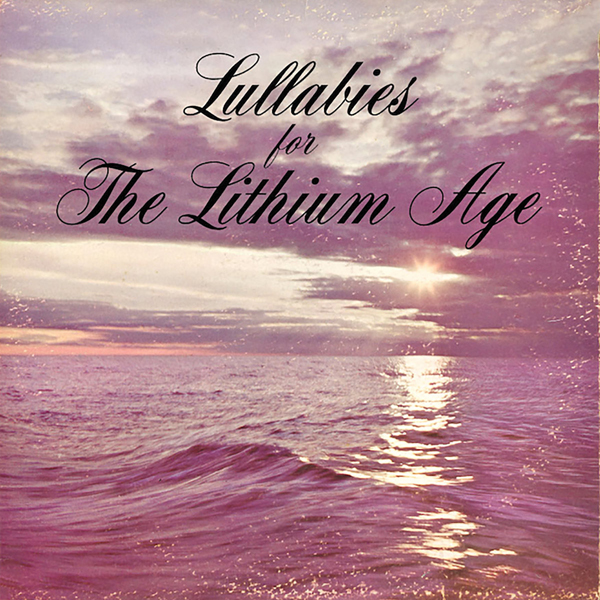