InterView: Psyclon Nine – The Music is the Light2

As darkly aggressive as ever, while still pursuing greater sophistication in songwriting and production, Nero Bellum speaks about his latest effort under the banner of Psyclon Nine.

An InterView with Nero Bellum of Psyclon Nine

Nero Bellum has never been understated in his artistic output. Even when exploring different atmospheric modes in his solo material and within the blackened industrial/metal confines of Psyclon Nine, his music has exuded an almost pervasive sense of lyrical and sonic intensity, steadfastly exorcising the demons of his darkest observations of human experience. His latest effort, Less to Heaven continues to pursue these subjects in his usually aggressive manner, while also applying a greater level of production savvy and sophisticated writing to ensure that it’s not just another run-of-the-mill release from Psyclon Nine… not that longtime fans will find much fault in the band’s established tropes; simply that Bellum is putting forth the energy to improve his execution. Speaking with ReGen, he speaks about the lasting effects of his message, the inspirations behind some of the album’s more darkly ambient moments, his thoughts on the industrial and metal music scenes, and even shares a fond memory of late Metropolis Records founder Dave Heckman.

Less to Heaven has some very distinct anti-Christian overtones to it, not the least of which being the red inverted cross on the cover, as well as the lyrics to the album’s second single, ‘See You All in Hell.’ On the other hand, a song like the first single, ‘Money and Sex and Death’ seems more broadly aimed at the ills of a capitalist society, and these are all themes you’ve explored before. I’ve asked this of many bands who also take harsh stances at sociopolitical and religious issues – is there ever a point, especially after so many albums, that the impact of the message feels diminished or diluted? It’s obviously not, but does that ever become a concern in the writing process?

Bellum: These themes are even more relevant today and where I might have been cryptic in the past, my philosophy regarding lyrics and aesthetics has changed. A great line from the film Se7en comes to mind, ‘Wanting people to listen, you can’t just tap them on the shoulder anymore. You have to hit them with a sledgehammer, and you’ll notice that you’ve got their straight attention.’
And while those themes seem to live at the forefront of the album, it was my intention to be as authentic as possible. To open myself up and purge the anger, fear, anxiety, regret, and depression that follow me.

In your estimation, how possible is it to be critical of a particular system – capitalist, socialist, democratic, etc. – and still participate in it… or at the very least live within it?

Bellum: I feel that it’s impossible not to be critical of any system that we find ourselves in. It’s in our nature. We require an element of comfort and safety.
And what choice does one really have? If you want to have a voice, you can’t live off-grid, isolated from the rest of civilization.

‘Catastrophic’ is a very striking, cavernous, and very cinematic track, those strings in it reminding me very much of a Mellotron, while the overall sonic character has this almost wire-recording or phonographic feel. And then following it is the instrumental ‘Après Moi Le Déluge,’ which I understand is a quote attributed to King Louis XV of France generally regarded as an expression of indifference after death. They (along with the ‘Blood Out’ coda) take on a slower, more somber tone after the more virulent songs that preceded it, they seem to express a sense of ruin and regret.
Would you tell us how these songs came about, and was it always the intent to have the album gradually work toward this grim and very nihilistic close? Was there an overarching concept at work, or is that just how it transpired?
Do you feel it’s possible, in the midst of such a dark outlook, to find a sense of hope? What do you feel the function of art and music is in that circumstance?

Bellum: ‘Catastrophic’ came about in a very organic way. Without pulling the curtain back too far, I found myself in a place of hurt. I picked up a microphone in my studio, hit record on my DAW, and without writing lyrics, I began to sing what would become ‘Catastrophic.’ What you hear on the album is that original recording. I performed the instrumentation by hand around the lyrics. It was something that I needed to create in that moment.
Regarding the overall theme of the album, the flow… the only thought that I had was to create something authentic; to hold a mirror to myself and to transcribe. You might look at Less to Heaven as a journal of sorts.
The light at the end of the tunnel is the music itself. It’s beautiful to me when an intense sorrow can facilitate the creation of art; even more so when that art touches other people.

Psyclon Nine has been lauded for the blend of darkly extreme sounds of metal with the abrasive noise of industrial, and while industrial/metal is nothing new, there does still seem to be a distinct divide between the two worlds, bridged only by those ‘niche’ bands that seem more rooted in one or the other. What are your perceptions (at least as it pertains to Psyclon Nine and your own experience) on the two scenes – metal and industrial – and how the two have evolved, both separately and collectively?

Bellum: I honestly don’t concern myself with genre. What was originally interesting about industrial music to me was that it was unconventional. It didn’t follow the rules of rock, metal, etc. Any and all instruments (or non-instruments) are welcome. As soon as you surrender yourself to a genre, you’re giving up your freedoms as an artist to experiment. I don’t feel comfortable in confined spaces. I don’t have a desire to recreate the same album over and over again just because it did well commercially.
All of that said, it does feel like more bands and projects in all genres are beginning to chart unknown territories and that’s something that I find refreshing and exciting.

Outside of Psyclon Nine, you’ve collaborated with the likes of Dismantled, Suicide Commando and with Tim Sköld in Not My God. I understand that Sköld is no longer part of the band’s live lineup as he’s now playing with Front Line Assembly, but what is the status of Not My God? Will there be a third album, or is that partnership now dissolved?

Bellum: Collaboration is almost never an easy thing for me. I can be somewhat ‘precious’ about my art, so it’s rare that I feel comfortable and confident around and with another artist. Tim and I have a wonderful dynamic and it’s a pleasure working with him. As far as NMG III… we will see.

Are there any other collaborations or guest appearances in the works that you’re able to tell us about?

Bellum: I have been working with quite a few artists that I admire on an upcoming project; however, I try not to speak of anything until it’s finished. You will absolutely see something soon.

You’ve been with Metropolis Records for many years, and we recently lost the label’s founder Dave Heckman. What can you tell us about your association with him? Are there any words or fond memories that you’d like to share? 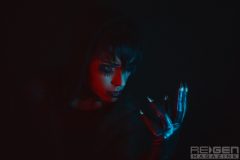 Bellum: Dave’s loss was terrible and shocking. In some ways he felt like a sort of father figure to me. Dave and Metropolis have always been great to me and have had my back through thick and thin. I feel his loss deeply.
One story that Dave used to love to tell was how we met. I was a teenager at the time. I went out with friends to see a band called Informatik, who happened to be a Metropolis band. After the concert, a friend pointed Dave out to me and mentioned that he was the owner of Metropolis Records. Being the asshole kid that I was, I immediately walked up to him and introduced myself to him by telling him that I was going to be on his label someday. He responded with a laugh and ‘whatever kid,’ and walked away. Almost every time we found ourselves in a social situation together, Dave would tell the story to everyone in the room, and we would have a good laugh about it.