Greek electronic duo Paradox Obscur speaks with ReGen about signing with Metropolis Records and the shaping of the band’s artistic direction.

An InterView with Toxic Razor and Kriistal Ann of Paradox Obscur

Through a prism of deep electronic waves and rhythmic pulsations, Paradox Obscur has recently unveiled their fifth studio album, Morphogenesis, along with a set of striking videos for “Wild Silk,” “Animal Reactor,” and “Cocoon.” The band began in 2014 and is one of the few electronic ensembles to record its albums in real time, without the aid of sequencing and editing software. Having made their Metropolis Records debut in 2021 with the Singles & Rarities collection, the label has now released Morphogenesis as an engaging album of fresh material from the duo that has already garnered a great deal of attention and acclaim. In this special contribution to ReGen‘s pages, Edgar Lorre was able to have a stimulating chat with the duo of Toxic Razor and Kriistal Ann about a number of diverse subjects such as the current state of things, the new album, art, poetry, gear, and more.

Congratulations on the new album. I believe it is your best work to date. Are you pleased by the reaction thus far?

Paradox Obscur: Thank you very much for your kind words. We made every effort to show a remarkable and inspiring work. During the sheer oversaturation of the music industry in recent years, it is not easy to emerge with something that is worth listening to for a lot of people. The plethora of albums and digestible imitations have flooded the market and despite all the first positive impressions we have received, we feel that a large portion of the world has not been able to find time to listen to the album.

Is your music influenced by any non-musical forms of art like film, painting, or literature? If so, please feel free to elaborate for our readers.

Razor: For certain, art in general is another driving force behind the PO vehicle. I enjoy watching films, fashion shows are always of interest, and of course, literature has also played its part – there, Charles Bukowski, Andreas Empeirikos, André Breton, Arthur Rimbaud, and William Blake are some of my favorite writers.

Ann: I feel that today’s time lacks inspiration, as people are absorbed in the conditions of survival and quite blurred by the dangers of the media. The biggest inspiration in recent years for me has been the contact with nature and the sea that I love. The ancient philosophies and the hierarchical metaphysical cosmic system are a great inspiration and guidance, as well as the high virtues that are available possibilities of human nature.

Both of you share vocal duties in the band. How do you determine who will sing on what track?

Razor: Ann is the main vocalist in the band; her voice is the trademark of Paradox Obscur and one of the most unique voices in the scene. I feel really lucky working with her, and she can easily navigate between genres. From my side, I don’t usually do vocals for Paradox Obscur, but there are a few tracks where I have contributed on some parts because together, we thought it would offer a variation or another touch to the structure of the album.

One of the many notable aspects to your sound is that the vocal parts are rather minimalist at times; this gives your memorable use of electronics plenty of room to breathe. Is that the intent? Can you tell the audience about how you arrange your songs?

Paradox Obscur: It always depends on the nature of the song. We try to have a balance in between, but there is not a standard motif of how lyrics shall flow. Eventually, a track shapes its form on its own and from there, we follow.

Do you feel with Morphogenesis that Paradox Obscur has quite literally ‘fully formed the shape of your sound’ and that the title reflects that? 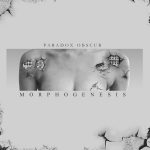 Razor: Morphogenesis is the next step after our SYNΘESIS LP, a natural progression with an updated sound, and we are very satisfied with the final result. However, I don’t believe that the band’s sound is reflected 100% here since we always like to go over the line with each album and try different things under the PO prism. If you go back to our older releases like the Noir EP or the Anacrusis album, you can also feel that the same energy is here today, just interpreted in different ways.

This is the first album of new material Paradox Obscur has completed for Metropolis Records. Firstly, did you have any hesitation with signing to an American record company? Secondly, how does that experience compare with some of the European labels you have recorded with in the past?

Razor: Indeed, it’s the first full studio album we did for Metropolis, since the Singles & Rarities release was just a compilation of older songs. Actually, our main concern was the distribution part – something we lacked with previous releases, and Metropolis has many years in the game, so that was really a serious point for us. Metropolis Records was always a label that released some very important artists and bands from the alternative electronic scene – acts like Juno Reactor, Dismantled, The Dreaming, VAC, etc. are some of my favorites, and having the opportunity to work with the label is truly an honor.

Ann: Metropolis was a landmark moment for the band, as when you come from a small country like Greece, with no absolute cultural support of alternative bands, and at the same time, you do not belong to the hardline caste of German industry that deals mainly with our music, it is difficult to survive. Metropolis and its excellent team are important support and impetus for us to continue our musical journey without wasting time on slips.

Can you tell some of our readers what are your favorite pieces of musical gear/keyboards you use to record?

Paradox Obscur: We record with various synths, but some of the ones we enjoy working with are the Korg MS2000, Virus TI Polar, Mopho DSI & UNO Synth, etc.

Both of you work on projects outside of Paradox Obscur. What are you working on creatively right now?

Razor: There are various projects in the way; still a lot of work for us to do with Paradox Obscur, but I’m also working on some new music for my metal/disco project. Last year, I launched Hardware Pulse, a side project focused mainly on instrumental tunes in a more electronic and danceable way.

Ann: For the last two years, I have not had much time to deal with anything other than the new PΟ album, as I am also studying other things besides music. There are some new songs in the works for my Kriistal Ann solo projects, but they need to be perfected.

Many bands or projects that are described as being darkwave, goth, industrial, or post-punk are often opposed to those labels, while others do not mind. How does Paradox Obscur feel about it when and if that happens?

Razor: Tags were invented to help people have an idea where a band moves. Other than that, I don’t give much attention to tagging music. Personally, when it comes to PO, it’s simply electronic music.

Ann: Personally, I do not like terminology in subspecies and restrictive labels in general, but it is a fashion of the time necessary mainly for social networks. Many careers have been built on tags as it’s the easy way to establish your brand name. To me, all this is a cheap habit.

Any plans or desire to perform in North America?

Paradox Obscur: Especially for Latin America, we had a lot of proposals from time to time, which did not work out for various reasons. It is true that one goal is a tour in the wider region of the U.S.A. There are a lot of people who love PO there, and it would be an honor and a joy to play for them. May there be light on this dream in the near future.