Having signed to Metropolis Records and releasing the Singles & Rarities collection, ReGen now has the opportunity to introduce American audiences to this exciting Greek electro duo.

An InterView with Kriistal Ann & Toxic Razor of Paradox Obscur 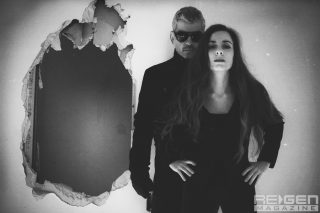 Paradox Obscur has quite the backstory. In 2007, singer/composer Kriistal Ann was diagnosed with AS, resulting in a decline in her quality of life. The power of music would persevere as her partnership with companion Toxic Razor led to overcoming the condition and uniting around their love for music, dedicating their lives to this passion project. Since 2014, Paradox Obscur has released four full-length albums and a handful of EPs, all showcasing the duo’s trademark lo-fi gothic groove, recorded with vintage synthesizers and drum machines, but without the use of DAWs or plug-ins. This has kept the band’s sound intimate, old-school, and above all, unique to Paradox Obscur. As well, the band has played multiple shows and festivals all over Europe and now calls Greece their home. In 2021, the band signed with Metropolis Records, where the first release on the label, titled Singles and Rarities, was released on March 12. Kriistal Ann and Toxic Razor were gracious enough to spend some time with ReGen Magazine to bring us some more insight into their world, both past and present.

Your latest release is a collection of Singles & Rarities designed to be your first release on Metropolis Records. Was this intended to be the best place to start for someone just getting into Paradox Obscur? Which tracks would you consider to be your favorites?

Paradox Obscur: Singles & Rarities is a collection of songs written individually at different times, intended for different concepts. At that time, we recorded an aesthetic with more minimalist lines, something that comes to reverse the current situation in which we experiment with sharper electro sounds. Nevertheless, as accredited by our listeners, there is no album of a similar style in our discography, which you consider a twin variant of the previous one. So certainly, to form an opinion it is not enough to listen to only two or three songs. When the proposal with Metropolis Records came about, we had not yet completed the album we are currently working on. We believe that this condition came at the right time because we had in mind anyway to collect these special songs and give them a sculpted form on an album, something that Metropolis Records and Mr. Athan Maroulis made a reality.

How did you get started in this genre of music? Who were your biggest influences? 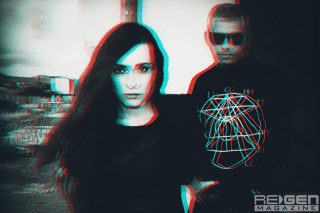 Ann: Personally, my influences have always been more focused on classical styles such as classical music, rock, and jazz. After my acquaintance with Toxic Razor while we were sitting one night at his house, through the huge record collection he maintains, he recommended to me some avant-garde gothic rock, darkwave bands, which I confess they charmed me. My first contact with bands like Dead Can Dance and Cocteau Twins pushed me in search for more bands of the genre, discovering as well the newest bands such as Zola Jesus, Chelsea Wolfe, Linea Aspera, etc.

Razor: I started with ’80s synthpop/Italo, and then was a metal freak ’til today, but it was with artists like Jean-Michel Jarre, Front 242, Aphex Twin, Future Sound of London, Orbital, etc. and the Eurodance/rave movement that got me into the wondrous fields of electronic music. As for influences, black metal, industrial/metal, futurepop, and psy-trance are the genres I enjoy more listening to, so I guess these are also responsible for the influential damage.

COVID-19 has put a ‘freeze’ on live touring, but let’s reminisce for a few – tell us about your most memorable live show.

Paradox Obscur: The presence of the pandemic has admittedly created great dystopia throughout the cultural community; it is a serious issue, and we all expect to see how its future will evolve.
Nevertheless, there are exciting memories within us that provide a backup for the limitations we are experiencing, and one of them is undoubtedly our last concert in Berlin at a special event organized by an avant-garde community of artists.

Paradox Obscur has a very unique approach to recording, doing so in real time and not with programming or sequencing. Tell us more about that process and the challenges you face during recording sessions. 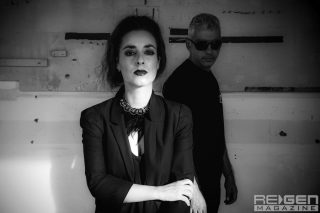 Ann: As you rightly say, it is a complicated and time-consuming process that we will not deny has been difficult for us, at least in the beginning. Over time, we learned to better manage the tools at our disposal and to overcome the difficulties with experience and experimentation by insisting on this style of recording precisely because we realized the uniqueness of aesthetics that can give the final result.

Razor: We are really enjoying recording in real time as we like to give a live feeling to the compositions. When in the recording process, I always love the feel of jamming/rehearsing like a band, and for that reason, we have also recorded a totally live set with the use of multiple hardware synths and drum machines with many improvisations, which resulted in an album of six tracks all made from scratch.

What are your favorite pieces of equipment?

Razor: Well, that’s changing from time to time, depending also on what is needed for the respective track we are working on, but gear like the Virus TI Polar or the DSI Mopho are great for fat bass or lead sounds.
The last years, I am also hooked on the Roland JD-Xi and very much surprised by its capacities, which also seems like a very versatile synth for live situations.
But basically, in the end, each synthesizer or drum machine plays its role from time to time and depending on the occasion.

Ann: For me, it is undoubtedly Virus TI Polar, which I use extensively due to the endless variety in the sounds and the configuration of the melodic lines that I want to give, as well as the JD-Xi for the nice bass lines you can create.

As a two-person group, tell us about the working dynamic and creative process between the two of you. Is it a true collaboration, or do each of you play specialized roles in the curation of your music?

Ann: This could be considered a trap question, but given the fact that all people are unique entities and each of them contributes to the overall formation of a society or situation, of course each plays its own unique role in the band. What I could emphasize is that with T.R., we have an identical temperament and similar moods, so the moments when we are called to share our inspirations have a synchronicity and group narrative.

Razor: We both contribute to the lyrics and the music compositions like one soul in the entity of Paradox Obscur, blending this labyrinthic esoterism with the eerie nature surrounding us.

When live shows return, where do you plan to play first? 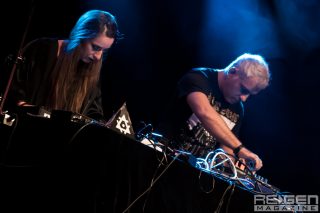 Paradox Obscur: There are some concerts that are pending from last year due to the postponement given and these are in Germany, Poland, Belgium, Switzerland, Russia, etc. We hope that if not in this year, in 2022 we will be able to personally mingle with our audience.

Can you tell us about what the future holds for Paradox Obscur?