InterView: Laibach – Tragedy and Perversion in the Industrial Theatre0

ReGen Magazine speaks with Laibach about the band’s latest work of industrialized theatre.

An InterView with Laibach

For 42 years, the Slovenian art and music collective known as Laibach has courted controversy with great aplomb, creating music that is as brazen and bombastic in its theatricality and subject matter as it is adventurous in its exploration of virtually all genres of the modern era. This year’s release of Wir sind das Volk (Ein Musical aus Deutschland) marks the group’s posthumous collaboration with acclaimed playwright Heiner Müller (1929-1995) as the album presents music Laibach crafted for the theatrical production of the same name – translated as “We are the People,” the production follows Müller’s methods and strategies of manipulating and rearranging material, the results creating new context separate from its disparate ingredients, not unlike the industrial music genre that Laibach has championed over the past four decades. The band’s association with Müller had been ongoing since the ’80s, with this project coming about at the suggestion of Anja Quickert, head of the International Heiner Müller Society. ReGen‘s Trubie Turner and Colin Andrew MacDougall had the opportunity to speak with Laibach about Wir sind das Volk, specifically touching on the all-too-relevant topics of the perversion of patriotism and the nationalist identity of a people, as well as the ramifications of art and propaganda, the shared influence between the band and the playwright, as well as the positive effects of tragedy over victory. 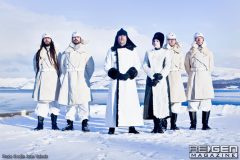 Obviously, Müller’s work is important to you, and with this album, you’re bringing more attention to and paying tribute to his work, but do you fear the album’s message might be lost to an international audience presenting the album in only one language? Or do you feel the purely German presentation was a necessity for this artistic context?

Laibach: German, English – what difference does it make? It’s all, in principle, the same language. But yes, it is quite important that we use German here as it is a meditation merely on Germany and German history through the eyes of one of the biggest German dramatists and poets after the second World War, Heiner Müller. Language also is a poetry, and we don’t need to understand poetry – we need to feel it. But anyway, there’s an English translation of all texts included in the album booklet, also for the CD release, for those that do not want to use their imagination.

Laibach has long been known for their very Müller-like adaptations of popular songs and bringing them into new context. Has Müller’s work always been a strong influence in Laibach’s creative direction?

Laibach: Not very strong, but we knew about him – he was there somewhere, an important name in German theatrical field, and we understood he used similar methods as we did. Apparently, he was more inspired by Laibach himself than it was the opposite. In fact, many German artists were in the ’80s, especially theatre directors, and we later successfully collaborated with some of them.

From our most basic understanding of Müller’s impact, it seems that he was the father of theatrical ‘industrial’ with sampling and applying different contexts of other people’s work. ‘,,,our theater is sampled. Totally fake…’ It seems like a natural point of inspiration for ‘industrial’ music. Would you agree?

Laibach: Well, yes, but only to certain extent. The idea that we live in the time where we have no time to invent original ideas – also because ‘there’s nothing new except what has been forgotten’ (according to Marie Antoinette) – is already quite old, but it goes back definitely into the beginning of the 20th century. Instead, we can use concrete, ambient, and industrial sounds (all around) and put them in different contexts. Music, films, and art did this very soon, and Müller probably took the method from there and developed it further.

Is it ironic that a Müller tribute album by an ‘industrial’ act like Laibach has no obvious samples in it?

Laibach: But we have Müller in all his glory – he is the sample drowned in the Laibach sound and context.

In non-theatrical music, obviously rhythm and beat are nigh-imperative; how did your writing process change when forced to really consider stage presence and the variables of theatrical delivery?

Laibach: It wasn’t very difficult as this was not the first music for the theatre that we did. We experimented a lot and we constantly synchronized our ideas with Anja Quickert, who was the director of the project and the show.

‘Seife in Bayreuth’ seems to allude to the Beirut blast; out of that we definitely saw a coming-together of the people of Lebanon, as well as the international community in support. If this is 100% off-base, then please ignore this line, but to what extent does – or can – tragedy define a ‘people?’ Is tragedy perhaps a ‘better,’ or more durable social cement than victory?

Laibach: That’s a very good question and we can only agree with its conclusion. It’s actually Samuel Beckett’s mantra: ‘Try again. Fail again. Fail better.’ In victory, the winner gets drunk and sees the world in distorted, egoistic view. In tragedy, people get sober, and they show solidarity with each other. The effect of victory lasts shorter than the effect of tragedy.

Following that line of thought, would you say that censorship is something of a shared ‘tragedy’ between both Müller and Laibach?

Laibach: No tragedy here at all; we were both ‘fans’ of censorship. Both growing up under communism, we realized that the communist state took art tremendously seriously; it trusted it to have enormous effects on the public consciousness – and therefore, censors had a lot of work – more in DDR than in Yugoslavia, but anyway, we had to deal with their occasional strikes as well. And Heiner Müller stated somewhere that he would rather be forbidden but taken seriously than having complete artistic freedom with no effect on society. In this context, he also said that ‘theatre in the West has the freedom to act as it pleases because it cannot have any social effect. Theatre in the East does not have such freedom because there is always a danger that plays will have an effect.’ Same situation with music, especially the independent ones, in ’80s Yugoslavia, from where Laibach appeared.

Orwell wrote ‘all art is propaganda,’ to which you infamously replied, ‘all propaganda is art.’ In a similar sense of involution, is it possible for censorship to be strictly political – or even strictly artistic? Can art itself be censorious, in of itself? 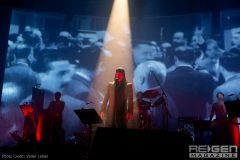 Laibach: It depends on the point of view and the context. Art in North Korea, for example, is censored to the point of absurdity, and yet that is why it has an aesthetic value and is not very far removed in its formalism from some of the works of American pop art and cannot simply be dismissed as ideological kitsch. All art is ideological and some of the greatest works of art are kitsch.
There were many regime artists in early phase of Yugoslav communism who were lucky enough to have Tito break relations with Stalin and the Soviet Union in 1948, and at that time, artists were also advised to start painting more Western, modernist art. But not too Western, of course. So, with some self-censorship, a very special direction of socialist modernism emerged, which is actually very interesting. Even in high architecture, which is in principle more ideologically neutral, cutting-edge works were created, and monumental social modernist monuments were erected all over the country.

What role does Müller’s principle of Kopien hold in your repurposing/rephrasing of your work, especially on Wir sind das Volk?

Laibach: As already said, it didn’t really affect us as much here. But in general, copying, appropriating, and quoting is important part of our content and our working process.

Müller described theatre as, among other things, ‘a dialogue with the dead.’ Anja Quickert refers to both the ‘myth of the nation’ and ‘the abyss of the nation,’ which seems something of a perfectly perverted portmanteau of both JFK and Nietzsche. In that vein of thought, is Wir sind das Volk the nation-abyss looking back at its people?

Laibach: In the context of the war in Ukraine, where Putin claims that Ukrainians are actually Russians and yet massacres them without mercy – in the old Stalinist tradition – such a claim is certainly relevant and makes much sense.