An InterView with Jeremiah Kane

Poland’s Jeremiah Kane is certainly and outstanding entity when it comes to both scenic representation and the intriguing brand of “Samurai Street Rock” the band performs. Combining the elements of metal, electronics, and Japanese motifs, the group achieves a singular and quite intriguing result that stands apart from the current trends of the genre. Signing to NoCut Entertainment for this year’s release of Ronin, which features both energetic sparks and fragile soundscapes, the band has managed to achieve a new level of artistic expression. In this special contribution from Karolina Kratochwil, Jeremiah Kane’s founder and namesake speaks about live concerts, new releases, music videos, collaborations, and the applications of Bushido code in the modern world.

I believe I had a chance to see you performing live this year at Castle Party in Poland. Your shows are compelling, energetic, and profound, and you also have a specific scenic look. Could you tell me more about the idea behind Jeremiah Kane and how it is represented during live performances? 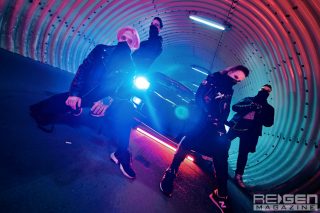 Kane: Thanks, happy to hear it! Our music is often described as very energetic and uplifting, and these two factors describe best what we want to represent with our music when we create it and perform it live. We want everybody to have fun and remember our live shows, so we work hard on achieving this. For example, this year, we introduced live drums to our shows; last year, it was live bass guitar. Who knows what new we will bring with us for our next tour? I always dreamed about driving a cool car onto the stage, like how Rob Halford drove a motorcycle during Judas Priest live shows! (Laughs)

What were the beginnings of Jeremiah Kane? When and how was the band formed? Do you all come from the same musical background?

Kane: Jeremiah Kane started first as my solo project back in 2017 as I wanted to try creating alone electronic music inspired by ’80s sounds and style after a few failed bands. I was really into listening to synthwave back then, and I wanted to try to make similar music as well.
As I wanted to progress and expand, both in music creation and during live shows, I invited my friend Vincent to co-create music with me. Apart from us, we have our two friends – Chris, who plays bass guitar, and Jacob, who plays the drums – both of whom join us during live shows and other band related activities. Each one of us has some experience in playing in a band before Jeremiah Kane, so I guess I will never truly escape playing in a band.

‘Samurai Street Rock,’ I guess is the term you created. In your music, you combine the classic rock/metal element with invigorating electronics and Asian motifs. How would you yourselves describe your music, and where do you take inspiration from?

Kane: Yes, I created this term to describe both visual and sound style of what we are creating. It’s hard for me to find the typical term for the music that we make, as we try to make each release different from the previous one; the same applies to every song we make. We really like to blend various styles of electronic music with heavy guitar sounds.
If we would need to describe where does our inspiration comes from, it’s usually the music we listen to, movies, and the overall Japanese pop culture. I often go for a long night driving in my cars, either alone or with friends, to find inspiration.

Ronin was released in 2022. The Japanese concepts and ideas seem close to you. Could you tell me more about the release and the album’s background? 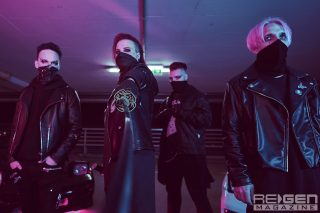 Kane: Years ago, I was really into Japanese culture and manga/anime. As I was looking for a unique theme for our next release, I really got back into that interest recently as I thought it would be the best to describe the sound and music we are creating. It heavily influenced what I wrote. I wanted to create a unique blend between electronic music, metal (which we started to introduce on All or Nothing), and Japanese inspired sounds and instruments. That’s where the idea for Ronin came.
As we wanted to set the bar much higher than previously, the album is much longer – 13 tracks, All or Nothing had nine tracks. We also created an intro and outro song to make the whole album feel like a ‘concept’ – a story that begins and ends, and each song a chapter in that story, each different from the other.

Tell me about the collaborations on the album. I believe you mentioned Julian Larre from Lacrimas Profundere, ex-Groovenom singer SANZ, Prexss, and Alen Ljubić?

Kane: Ronin is the first album in which we incorporated more songs with vocals as we wanted to experiment with the overall sound. As we worked to make each song unique, for each vocal song, we introduced different singers that would suit best the mood and tone of the song. It was something new for us as we are mainly an instrumental band, so we had to look up and find help to find the best vocalists. We asked our producer and label and that’s how we gathered the crew you mentioned in the question. All of them made an outstanding job and we are grateful for their contribution to the album.

Some elements we traditionally associated with Japanese music are also present in some fragments on Ronin, like on ‘Kanjozoku’ or ‘Bushido.’ Where is this interest in Japan coming from?

Kane: Well, as kids, we watched a lot of Japanese anime series, mainly Dragon Ball and Dragon Ball Z. That’s where our interest was born. Some of us are more into Japanese media like manga or anime; others appreciate the cultural aspects of Japan, and I am really into Japanese music and car culture. There is something truly unique in everything that is created in Japan, and we want to show all those sides in our music.

Are the ideas behind the Samurai code close to you? Is it even possible to apply the rules in the modern world? 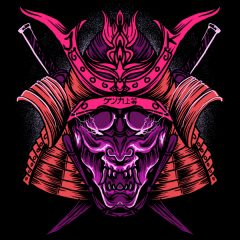 Kane: It really depends about which specific lines we are talking regarding the Bushido code, but overall, it wouldn’t be possible to apply it to the modern world. As our band image depicts a sort of cyberpunk and ‘modern Ronin‘ look, I can already say that the Bushido code was broken by us. Samurai who lost their master were supposed to commit suicide to avoid dishonor – that’s one of the things we can’t apply today for obvious reasons. Those who opposed that became Ronin, masterless samurai, and it was considered a great shame back then to be one. There are many tales about their courage and willingness to help the people in need, one which probably most people know, the legend about the 47 Ronin. They were wanderers, traveling Japan after losing their main purpose in life. That’s how I felt before I started to make music as Jeremiah Kane. I want to inspire people through our music and art that we create. Our image and art are based around Japanese motorcycle and street gangs from the ’80s and ’90s, so we connected those two things to create a sense of unity, a brotherhood/sisterhood.

How would you say you have progressed musically since All or Nothing was released in 2018? 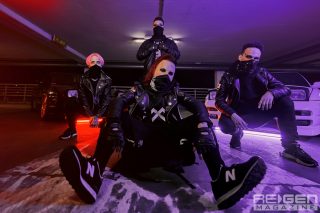 Kane: I think a lot. (Laughs) The compositions started to be more variable and complicated. We incorporated more musical themes to our music and probably we found our own and unique sound. I can say that our music writing skills really expanded through those years as I like to challenge myself to create different genres of music for fun to train myself and discover new ways of sound creation. Let’s say those four years since the release of All or Nothing were spent on training ourselves to create something truly unique.

The covers of your albums bring manga or cartoons to one’s mind, while the others may bring associations with Blade Runner or The Fifth Element. Who is the artist responsible for your artwork?

Kane: There were various artists who created the cover arts for our releases. It depends on what mood the song is, and which artist would be the best to create an artwork that perfectly describes what the song’s premise is about. We constantly look up for some new artists to consider, so we can make each release visually unique.

To what extent signing with NoCut Entertainment changed your creative process? Has it changed it at all?

Kane: It didn’t change at all. I could say that it opened our eyes to some new aspects in songwriting and gave us new possibilities, but overall, we are still 100% independent. We receive great support from our label, and we are grateful for that.

Tell me about the making of your ‘Wild Child’ and ‘Lights Out’ videos. I believe the latter was filmed at Pyrkon. Are you planning any new ones? 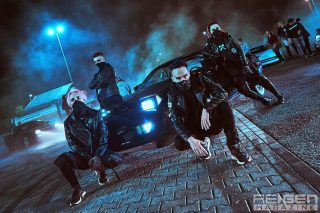 Kane: ‘Wild Child’ was our first live action music video that needed more preparation and planning. Our idea was to show the things that we like to do, and the video turned out to be a police car chase using classic American cars and our performance in an abandoned school. I guess that’s what describes our life. (Laughs)
For ‘Lights Out,’ we recorded our live performance during Pyrkon Fantasy Convention in 2022. It was one of the biggest and best shows we ever had. We also promoted there the release of the Polish version of Cyberpunk Red, the tabletop RPG game, as a part of cooperation with Black Monk Games, so we thought it would be cool to make a music video from that festival. Also, we wanted to show how people and we have fun during our live shows!

What can we expect next from your end?

Kane: Lots of new things will come up from Jeremiah Kane. We are organizing the biggest live tour we’ve ever done. We want to visit as many places as possible in Europe. Also, we’re working on some new songs here and there, and social media projects are coming up, so we won’t stay silent anytime soon!
Apart from all of that, we already started to gather new material for our next bigger release as Jeremiah Kane… we just can’t stand still!