Rhys Fulber speaks with ReGen about the legacy of Front Line Assembly, touching on the creation of the band’s new album and what the future holds.

An InterView with Rhys Fulber of Front Line Assembly

To have endured for 35 years is no small feat for any band, even for one of the most influential and trailblazing acts in the underground electronic and industrial music scene. Front Line Assembly has been waging the communication war since 1986, creating a distinctly energetic sound that transcends categorization to include virtually all forms of electronic music – from pumping EBM and techno to mechanized industrial, atmospheric trance, spastic dubstep, and even with a few bits of metal thrown in from time to time. Each album plays out like a nearly unearthed tome chronicling some sordid saga from a forgotten technological era that never was, and while many have come and gone within the band’s ranks, the heart and soul of the group for many has always remained the core duo of Bill Leeb and Rhys Fulber, with the January 2021 release of Mechanical Soul being the band’s latest outing. Fulber took the time to speak with ReGen Magazine about the creative process behind the album, touching on the inclusion of longtime associates Dino Cazares and Jean-Luc De Meyer, a few kind words about fallen comrade Jeremy Inkel, the future of live music, and some hints of what is yet to come. 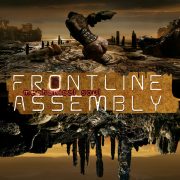 Front Line Assembly has now last around 35 years and the band’s musical development has been concurrent with that of underground electronic and industrial music, and you are considered one of its major pioneers. What have you found to be the major personal challenges in continuing to develop as an artist and in the band – in other words, how do you keep finding ways to top yourself and make each release better than the last?

Fulber: Bill and I are always listening to new music, so it’s not necessarily a conscious decision to outdo ourselves; I think it just happens organically. We also have a solid signature template I guess you could say, so if you revamp the finish from time to time, it keeps it evolving yet connected.

Mechanical Soul features some notable guest appearances who have quite a history in the FLA family already. You’ve worked with Dino Cazares in Fear Factory, and Jean-Luc de Meyer was previously on Artificial Soldier – so, the obvious question is how did this come about?

Fulber: The song with Jean-Luc was an existing song from 15 years ago – originally used on the song ‘Future Fail’ – and Bill felt the vocal wasn’t highlighted as much as it should have been, so he sent me a slower drum loop and asked me to build an epic track around the vocal. So, instead of working on tracks and writing vocals to them, this was the other way around. We had an existing vocal and built the song around it. 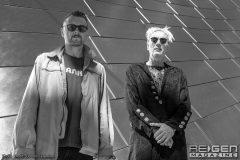 Dino’s style and sound are very recognizable, no matter what band he’s playing in. What was the process like for his participation on this album? Did any changes need to be made in order to fit his guitar in or was the track written with his guitar playing in mind?

Fulber: It was very simple actually. After Bill did the vocal for ‘Stifle,’ he thought the feel of the song would benefit from some heavy guitar accents, so I just said, ‘I will ask Dino.’ One call, done deal. I talk to Dino fairly often and I have also been working on some new Fear Factory keyboards through the plague as well. He just did his thing over what was there.

As for Jean-Luc, what do you feel his lyrical and vocal approach brings to FLA that differs most from what Bill does?

Fulber: Jean-Luc just has a very unique sound and an interesting lyrical style. No one else sounds like him. It’s both apocalyptic and intellectual and has power without being loud.

The album concludes with a remix by Bryan Black for ‘Hatevol.’ Why was this added to the album? Does it serve any sort of thematic purpose to Mechanical Soul, or is it essentially a bonus track?
Will there ever be another FLA remix album?

Fulber: We asked Bryan to do a remix earlier and we were going to release a single with the remix and a new song, but decided to just wait for the next album and add it on there. As the album came together, the remix wasn’t as stylistically different as before, so we thought it would be a nice contrast.
It’s hard to say if there will be a remix album. We never say never.

One of the major elements of earlier FLA was the use of samples from various movies and other sources, which has helped FLA’s music to achieve a distinctly expansive and cinematic edge to it. What are your thoughts on the use of samples as you reflect on your earlier work – what do you feel it helped to accomplish for you back then that you’ve now learned to achieve without them in later material?

Fulber: That’s something we haven’t really thought about. I think we still use a lot of samples – this new album is covered in them, but maybe it’s just less obvious now. I also think now we don’t like to use anything that is directly recognizable. The movie dialogue style has been strip mined extensively, so now I sample things that are more random that won’t be discovered easily.

Also recently released was Jeremy Inkel’s solo album, and we’d talked about your relationship with him in our previous InterView – how you personally had not worked very closely with him in the studio, but enjoyed touring with him. Have you heard Hijacker, and if so, did listening to give you any further insights on what he contributed to FLA’s sound?

Fulber: I have heard some of the album, and it’s good, but I don’t directly recognize the things he was working on with his laptop on the bus last tour he did. That material was energetic and modern. Maybe it’s there but in another form. I think he contributed energy and enthusiasm both onstage and off. He was definitely the least jaded of all of us and I miss that. 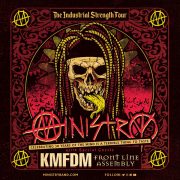 Let’s talk about the Industrial Strength tour, which has been postponed and is now tentatively scheduled to be taking place this year. Sascha had said in my recent InterView that he doesn’t foresee touring as a possibility until next year, while the guys in MINISTRY seem to remain hopeful for it to happen this year. I know it’s a bit of a loaded question, but I have to ask it… is there anything more you can tell us about the current state of things?

Fulber: Not really. It’s all centered around health and safety regulations, which are in constant flux. It’s pretty hard to say if and when. We don’t really think about it. It’s more a case of let us know when it’s going to happen.

Live music is in a great deal of turmoil due to the COVID-19 pandemic. What possibilities do you foresee for live music to survive or evolve in the wake of the current situation?
A livestream obviously doesn’t hold the same power as a live show, but as it’s become part of the status quo, what sort of possibilities do you see for FLA to use new and online technologies to keep music alive and maintain the excitement of audiences?

Fulber: I think for a band like us, a livestream might not have as much impact. I think for a singer/songwriter or something like that in a more intimate and or improvisational setting, it could work quite well, but for us, I am not so sure. If things are never going to be the same, then perhaps it’s something we will look at, but for now, I think we will wait and see.

You have FLA and your solo work, remixes, etc. What else are you working on and/or that is releasing soon that you’d like to tell us about?

Fulber: I have a new Conjure One album completed coming out sometime in the first half of 2021, and Bill and I are close to wrapping up a new Noise Unit album as well. I have solo material to organize, some Fear Factory stuff I have been working on, and some production work as well, that I won’t define until it’s released.