The Electrowoman Gabrielle Gustafson speaks about the realization of dreamt realities following the release of her debut album as EVA X.

An InterView with Gabrielle Gustafson of EVA X

Since first emerging in 2019 with a series of singles and the Electrowoman EP, Gabrielle Gustafson has been carrying EVA X forward with the sort of force and fervor of a seasoned pro. Her I Dream of a Reality debut album, released via the eminent Distortion Productions, has been catching the attention of a scene in search of new leaders thanks to Gustafson’s merging of polished performance, slick production values, and intelligent songwriting. As well, her music videos combined with a dynamic presence in both livestreams and on the stage at such prominent events as Mechanismus, Terminus, and the upcoming Unconvention demonstrated a keenly artistic visual sensibility that surely has audiences questioning if she is truly human or perhaps some cybernetic entity whose programming is so finely tuned to the current electro/industrial atmosphere. Subsequent to the release of I Dream of a Reality, Gustafson was kind enough to spare ReGen some of her time to talk about her artistic development, joining the Distortion Productions roster, her working relationship with Shane Stephenson and Adam Mah, the state of live music, and the important role of women in today’s music scene.

First of all, how are you? How’s your health?

Gustafson: I’m doing pretty well! Been very busy with the album, but I’ve been able to take a little time to unwind and celebrate with family and friends.

Would you tell us about the development of your music – what sorts of major strides, both in terms of production and songwriting, you feel you’ve made between 2019’s Electrowoman EP and I Dream of a Reality? 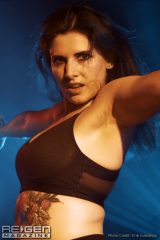 Gustafson: It’s like night and day, honestly. It’s hard to overstate how little of a clue I had when I released Electrowoman! After that release, I really took some time to brush up my skills. I came into I Dream of a Reality with a much stronger idea of what I wanted the album to sound like, and way more tools to get there – not just in terms of gear, but in terms of skills and techniques. And one of the joys of the album taking a bit longer to get finished is I got to really hone and grow my skills as a writer and producer as I developed it.

You co-wrote the material on the album with Shane Stephenson and Adam Mah; would you tell us about the working dynamic among the three of you? What aspects of your individual styles do you feel strengthened each other that are best reflected on the album?

Gustafson: So, I basically drafted the full album – we had 11 tracks, which we whittled down to eight as a group. Once that was done, we worked on each track together to refine the lyrics and music, and really elevate them to the next level. Shane and Adam really have a strong pop sensibility, which really was where I wanted to go with this release. Shane has a fantastic knack for instrumentation, and he’s produced my vocals for ages – he did additional work on Electrowoman and A Softer World, as well as this album. It was actually his idea to bring Adam onboard, and I was immediately in favor. Adam is a fantastic wordsmith, and a lot of his ideas are floating around on the album in the final state.

You signed with Jim Semonik’s Distortion Productions for the album release – of course, the man is a legend in the scene, but would you tell us how you came to sign with the imprint?

Gustafson: I first met Jim at either my first or second Terminus, and we’ve been friendly since the very early days of EVA X. I actually was lucky enough to contribute a song to the final Electronic Saviors. He was very keen and excited about EVA X from an early stage, so when I was looking for a home for the album, Distortion was one of the first labels I thought of, and Jim agreed!

The album’s only been out for a couple of months, so even though it’s still early days, what are your impressions on the label and how you feel the working partnership has developed/will be developing?

Gustafson: I’m very happy with how things are going! The Distortion crew have been wonderful, and it’s great to be on a label with friends old and new.

Prior to the album’s release, you’d performed at Terminus and Mechanismus. Did these live performances in any way affect your outlook on your music – any ideas that you’d not thought of that you might apply to future recordings and/or performances?

Gustafson: Oh, absolutely. It’s one thing to develop songs and play them on stream, but it’s another entirely to actually bring a show to audiences. I’ve been playing with the costuming, lights, staging, and backing instrumentation basically since Mechanismus, and I’m really happy with the show we are bringing to Unconvention and beyond. And, yes, I think that the live experience is going to really influence my next recordings as well.

From your experience, what are the major lessons we’ve learned in the wake of the pandemic and its effects on playing live? Or on the other hand, what do you feel artists, venues, promoters, labels, etc. should take away from the situation? 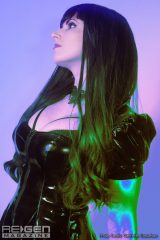 Gustafson: You know, I played my first live show as EVA X on Halloween in 2019. I think I literally had played as EVA X three times live when everything shut down. I remember doing the math sometime in 2020 and realizing that I had streamed more in that year than I had ever played live in all of my previous bands combined! So, I don’t know if I really have enough knowledge of the before times to say what lessons anyone should be learning, save one: live music, live art, is precious. It’s hard right now to be a gigging artist, let alone playing shows away from home, and yet it is 1,000 times better being in front of an audience of amazing humans than in my basement with my camera. The real question is, how do we keep shows and scenes going with how many obstacles rampant capitalism and inequality bring? That I don’t know if I have a great answer for.

Will we be seeing an EVA X tour in the foreseeable future, either as a supporting or headlining act? Anything in the works that you can tell us about?

Gustafson: Definitely! I will be playing at Unconvention, a few dates around the Northeastern U.S. in November, and dipping back down to Washington state in December.
As for a larger tour? Let’s just say I’m working on it.

The MTV generation is long over, but in the days of YouTube and livestreaming, what are your thoughts on the significance of music videos – both as a promotional tool and as an art form unto themselves?
Or to put it another way, do you have a philosophy around the visual presentation of EVA X – both in terms of videos and live performances – and how it complements or strengthens the music? 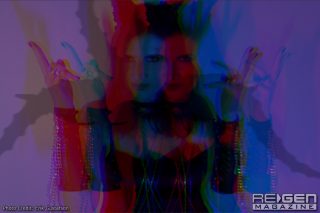 Gustafson: I love music videos. I came of age in the tail end of the MTV generation, but I definitely spent a ton of my teen years looking up heavy metal and J-pop music videos – I think I watched every single Gackt video released in that time at least a dozen times each. To me, they’re an art, and I get really into the design, production, and direction of my videos. I may sometimes make Erik (Gustafson, of Erik Gustafson Cinematography) work a lot!
For the album, we actually filmed and edited a whole series of short videos for Spotify that I’ve been slowly releasing on my own socials. it’s another look at the songs, and it let me try out some ideas for future longform videos as well.

At its heart, this scene has championed the voices of people not traditionally heard (women, POC, gay/bisexual/trans, kink/fetish, far left, etc.). Given the generalized misogyny in the mainstream community toward women as leaders, leading bands, producing, etc., what are your thoughts about the current wave of empowered women artists?

Gustafson: I really love it. I think both in and out of our scene, there is a real push forward from women of all stripes to lead and direct our bands, and to push for respect from fans and media. I saw Sylvaine twice this year, and I loved how she just absolutely claimed her space, like, ‘Yeah, this is my band.’ And then there’s obviously a lot of rising solo women in our scene. I was on the same night as Ratio Strain at Mechanismus this summer and she was fantastic. I’d like to think that I’m part of normalizing women as leaders in music. I hope I am!

Outside of music, what are you most enjoying? Hiking, reading, movies, sports, gaming, etc.? What is giving you the most joy now?

Gustafson: I moved to the Vancouver area earlier this year, so I’ve been really enjoying exploring my new home – there is a ton of great food, walks, and beer here. I’m also enjoying starting to pick up dancing and running post-move and Covid. And I just finished Cyberpunk 2077 a couple of weeks ago, so definitely getting some gaming in as well!

What’s next for you and EVA X?

Gustafson: After this next round of tour dates, I’ll be starting to write new music again in earnest. I think there will be one or two music videos early next year for I Dream of a Reality, then it’s onto the next release. I’m also definitely planning to play live lots next year, hopefully both in Canada and the U.S.!