An InterView with Ernst Horn of Deine Lakaien

Since the band’s foundation in 1985, Deine Lakaien has stood out in the world of electronic music the duo’s decidedly avant-garden blend of neo-classical stylings with accessibly poppy melodies. Fronted by the darkly saccharine voice of Alexander Veljanov and driven by the Ernst Horn’s multifaceted compositions, the pair have skated across various trends for nearly 40 years, remaining and presentations, from the synth-based simplicity of electro to more sophisticated orchestral assemblies; unfortunately, like many bands and artists in the midst of the Covid pandemics, Deine Lakaien had to place live performance on hold in favor of studio efforts that arrived in the form of the Dual and Dual + albums, both released in 2021. With these two albums, Horn and Veljanov sought to extrapolate the connections between the music that inspired them and the music they created as a result of their collective influences. In this InterView conducted shortly after the latter album’s release, Ernst Horn speaks with ReGen about the band’s approach to the Dual saga, touching on the shared mentality toward music and songwriting that has followed the pair for three-and-a-half decades, with a few thoughts about the public perception and consumption of music in the internet age. 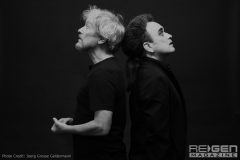 Let’s start off with your latest release, Dual +, which follows the earlier Dual release and shows the band exploring the connections between your influences and your own creations. As the band has been active for over three-and-a-half decades, what was the impetus for these albums at this time – what made you decide to make these two albums?

Ernst: The idea of a ‘covers album’ had been around for a long time – songs that we liked in the old days transferred into our sound worlds with Alexander’s vocals, but always trying to respect and maintain the essence of lyrics and music in the original tunes. And beyond that, we found that maybe we could create our own songs that relate to each one of the covers in their music, lyrics, meanings, or concept.

As presented on these albums, your influences are as diverse as the music you’ve created, with the notion that ‘music does not grow out of thin air.’ In selecting the songs for these albums, were there any that surprised you as the artist – any songs that you realized had a bigger impact on you than you might’ve initially thought?

Ernst: Well, one my first ideas was simple – I asked Alexander, ‘What would you like to sing?’ And he searched for a long time, songs that he loved in his youth, that he heard from his older brother. And of course, I also tried to imagine some of my personal favorites in the guise of our own sphere. As I was quite radical in my young days, I was surprised by some of Alexander’s choices, but when I listened to them after such a long time, I surprisingly liked songs such as ‘Lady d’Arbanville’ or ‘Dust in the Wind,’ and exploring their structures was sometimes very inspiring. 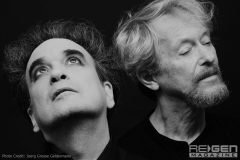 With 20 tracks on Dual and 10 on Dual + – 14 covers, and 16 of your own songs. Obviously, as the point was to show how these songs influenced you, did you encounter any sorts of difficulties in translating the songs to Deine Lakaien’s sound and style? Were there any songs that you feel you didn’t or couldn’t satisfactorily present in this way – any songs you wish you’d have done differently, or perhaps some that you didn’t include on either album that you’d have liked to?

Ernst: We recorded a song of a female popstar and an instrumental composition of a classic avant-garde composer that we did not publish. And of course, we tried a lot in advance – ‘Does it fit to Alexander’s voice, can we transfer that ‘special kick’ of this tune to our world?’ Sometimes, that wasn’t easy, as we definitely wanted to keep the general idea, melody, harmonies, and structure of the cover songs we selected. Usually, I created a rough version of the individual song with piano and simple drumming, and then tried to forget about the original song and create a Deine Lakaien song with the material. Maybe some of the covers worked better, some worse, but that’s up to our listeners to judge.

After 11 albums and over three decades, what are your thoughts on Deine Lakaien’s evolution over the years? In what ways do you feel the band and its music have progressed in ways that you’d initially hoped or intended? In contrast, in what ways has it gone perhaps in a different direction than you might’ve thought?

Ernst: Very difficult to answer. As far as I remember, our age was lower when we started our collaboration. Alexander, as the younger of the two of us, was highly inspired by the new wave music of the early ’80s, but also by pop bands such as ABBA, while I was a typical ‘late ’60s underground’ fan. Our first slogan was, ‘Let’s create something new!’ Our most radical album was 1987 (released much later), where we tried many different ideas, styles, sounds, and compositional forms. I think that with the following Dark Star in 1992, we found our fundamentally common path for Deine Lakaien. Of course, we try to progress with each new release, breathe the inspirations of the time, and honestly, I cannot judge to what extent the reactions of our listeners and the music business subconsciously might have influenced us. As an interpreter and producer, you are sometimes ‘operationally blind,’ as we call it in Germany.

I have often made the case that with the breadth of music that exists and the degrees to which many blend different styles together that the idea of ‘genres’ has become obsolete except for marketing purposes. In this digital age, do you still feel this to be a valid assessment – do we still need ‘genres,’ even from a commercial perspective, or do they matter at all?

Ernst: Of course, any musician will tell you, that he doesn’t belong to any genre, because he’s sitting on top of the Olymp of Arts. On the other side, we know more ‘genres’ these days than ever before. In my young days, there were only three classifications: ‘Progressive,’ ‘Commercial,’ and ‘Retarded’. ‘Progressive’ meant Jimi Hendrix, Aretha Franklin, Pink Floyd… ‘Commercial’ meant any kinds of ‘Top of the Pops.’ And ‘Retarded’ stood for country and marching music. Today’s internet could offer you any kinds of styles within seconds, but I think most listeners remain in their bubbles, music that sounds familiar and adequate to their and their friends’ lifestyle or social status. But what they all have in common (and this is my personal complaint as a classically trained musician) is the music they listen to must not be complicated or leave the rules of a pop song.

When Dual was released, you’d stated that the album was a statement of defiance and continuation in the face of the pandemic and having to cancel your tour plans for last year. Now, as we are in 2022, what are your thoughts – what do you feel are the major lessons we learned? Or to put it another way, what do you feel artists, labels, venues, the industry as a whole should take away from the experience and use or think about going forward?

Ernst: Cancelled shows and overall restrictions in our daily life also meant time for creative work, but as many people who are now forced to work at home experience, you need a lot of discipline to coordinate the tasks you have to fulfill with your private domestic life. I’m not a visionary who’s dreaming of virtual concerts in your home cinema in 3D. I would like to come back to our previous life, to meet friends, and listen to music in a club, a concert hall, or an opera house. To achieve this, we need one thing above all else: global solidarity in the achievement of our common goals instead of egoism and know-it-all in the social media.

What are you enjoying most right now? Watching movies? Reading? Walks in the countryside? Anything at all… what is giving you the most joy outside of making music?

Ernst: I always liked to cycle around in the countryside, and take along a book (at the moment Dave Egger’s Every, which fits perfect to some ‘visions’ that are related to the current situation). Skiing in the Bavarian mountains is already possible, although due to the pandemic, you may have to carry your skis up the mountain because the lifts will not be running. The official regulations change from day to day.

What is next for Deine Lakaien? Will we see a twelfth studio album soon, perhaps this time offering some new material?

Ernst: In general, after a period of collaborative work, we gave ourselves time to deal with individual projects such as Veljanov or Helium Vola, which will also be the case this time.

In what ways do you feel creating the two Dual albums has affected your perspective or songwriting moving forward?

Ernst: Dealing with the cover songs was also a learning process for me, because the approach to many productions is apparently very different from ours. Some songs seemed to have been created through joint improvisation, others were probably determined by the specifications (and edits!) of the producers. Working on our album was certainly encouraging for us to occasionally abandon our normal production processes.