InterView: Clan of Xymox – Building Upon a Legacy0

With a legacy of almost four decades at the forefront of the darkwave and goth/rock music scene, Clan of Xymox continues to provide an emotional soundtrack for the dimmest of times, with Ronny Moorings speaking about the band’s new album and life during the pandemic.

An InterView with Ronny Moorings of Clan of Xymox

Since the band’s formation in 1981, Clan of Xymox has been a consistent and prolific entity in the realms of gothic music. Over the years incorporating elements of rock, synthpop, dance, and darker electronic modes, Ronny Moorings has navigated the band through numerous pitfalls and triumphs to become one of the most respected and beloved names in darkwave. This year’s release of Spider On the Wall marks the band’s sixteenth studio album, presenting the classic Xymox sound in all its varied and emotive glory; with Moorings drawing on more introspective themes, the record presents his inner world looking out with equal parts love and despair. With the COVID-19 pandemic striking in the midst of the band’s sold out U.S. tour, Clan of Xymox returned home to complete Spider On the Wall, with Moorings taking the time to speak with ReGen Magazine‘s Brian H. McLelland about his thoughts on the state of the world in uncertain times facing a grim future.

First off, given your extensive experience and history, what has changed for you and the Xymox sound with this album?

Moorings: Nothing much in a real sense has changed. The sound of the new album is the way I feel it should be in this day and age. Maybe some songs I made are more minimalistic. The feel is a fresh one for me. It became a very versatile album. I can say that there was no pre-planned concept (there never was). The songs come out as they are and that is the way I like it, which is best. It is an honest record, which fans picked up on.

The press release for Spider On the Wall says that the album is an ‘artistic triumph for the band.’ In what ways do you think that’s true? In other words, what about this album sets it apart from other Xymox albums? 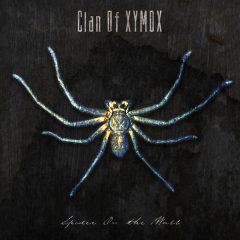 Moorings: I feel the album is absolutely worthy in the long range of albums already released before over the years. In the end, the fans can judge it better than I. I certainly am very pleased with the result and certainly proud to have released this album. The songs and lyrics just came out of me really fast. Apparently, there was a lot boiled up in me and it felt like the words wanted to get out of me. The last three albums, the lyrics came very easy, so I have no idea why that is, but that is what happened. I find it easy to delve into my memories and get inspired by certain moments or feelings I had at the time – writing a musical score for those thoughts really is what I do.

The first single, ‘She’ is beautiful and one of the strongest Xymox singles. Could you talk to us a bit about what went into its creation?

Moorings: The song started with the beat, bass, and guitar line. The rest came very quickly. The song is about being alone. I felt it was an instant dance floor filler. It proved when we played the song live to be an enormous success.

How, if at all, has the COVID-19 pandemic affected you and your creative process? 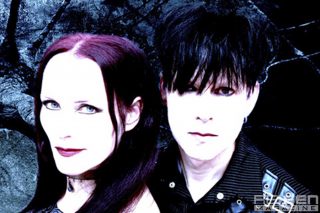 Moorings: We were in the middle of a sold out tour of the U.S.A. when we had to return home. Trump banned all flights from Europe when we were in Texas and it seemed the best course to fly from Houston back home. It was already eerie on the airport. The whole international airport was dead. No one was working there apart from one small airliner who luckily took care of our re-ticketing. The next day, we could leave the U.S.A., and we got home a few days later under a lockdown. No airplanes were allowed in. We were very lucky under the circumstances.
Since there were no more shows to do, I concentrated on the new EP, All I Ever Know. I made a video for it, wrote some extra B-sides for the EP, and I did a remix for Lesson Seven released in July. I spent quality time at home, tried to catch up with a lot of things waiting to be done, but never had the time for it. We just have been on holiday, pretending things are ‘normal’ again until you check in with a facial mask into a hotel. In Europe, we try to get back into a normal life, but it all seems to be hard work with lots of insecurities.

When you think back to all the shows you’ve played, which one stands out to you and why?

Moorings: That would be Mera Luna in Germany, playing open air for 30,000 people. That seems now almost a far and unrealistic dream. Luckily, I can look back to a lot of great shows and places. Also, Mexico City comes to mind with an equal amount of audience in a stadium. In a way, there were so many fantastic shows with each having their own unique flavors. I would not have wanted to miss any of it!

What does the end for Clan of Xymox look like for you?

Moorings: Nothingness… black matter… the end of meaning in my life.

The new record is, refreshingly, not overtly political. How have you managed to keep your personal political viewpoints from influencing your music?

Moorings: I was never so much on political topics. Once in a while, something pops up, but I mainly stick to personal feelings and relationships.

What comes next for you and the Clan?

Moorings: Hopefully a lot more shows in the future. So far, all seems very uncertain and there is only so much you can do as a musician. I fear for the end of culture as we know it. Time will tell how it will pan out. I know I will do anything to make things happen again.

What legacy would you like for yourself and the band?

Moorings: I think I already left a legacy, but will continue to build further upon it when possible.

What are you enjoying right now? This could be anything – music, film, life. What brings you peace and joy at the moment? 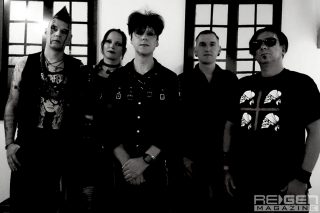 Moorings: Nothing brings peace and joy at the moment. I feel frustrated. These COVID measures and debilitating discussions and number throwing about Corona start to numb me. I just wish like everybody else all would be over soon. It seems to me that we have to live with viruses like we always did in the past. Let us live instead of locking us up, setting people up against each other, discussions about what to do and why. Each county, region has their confusing policies. Often, they don’t make even sense. Everyone seems now to be a virologist expert knowing what is best. The autumn will bring again colds and flu, so we will be made even more paranoid. I will have peace when we have our freedom back. No one seems to be in a hurry with this. Here in Germany, the infection numbers were incredibly low, but we still are restricted while nothing has happened for months now. Each week or day, the rules change. This seems to me going too far. I am talking about Germany and Europe and not the U.S.A., which I know has a totally different scenario. All who do not agree with the policies made is made publicly a denier or worse. Most unsettling is that there is no debate whatsoever. I fear for all the clubs going bust, artists going broke. Maybe this time, ‘No Future’ is the slogan for 2020. So, I enjoy nothing right now.