InterView: ACTORS – Celebrate in the Darkness0

ACTORS front man Jason Corbett speaks with ReGen about the band’s prolific activity, discussing the inner dynamics of the quartet, and shedding some light on the dark world of post-punk.

An InterView with Jason Corbett of ACTORS 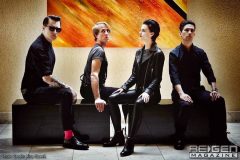 With the rise of the post-punk stylings of the late ’70s and early ’80s coursing through the underground music scene, the success of Vancouver’s ACTORS is hardly dubious. Even before the release of the band’s highly acclaimed It Will Come to You album, the group had been on a nearly unstoppable touring cycle, performing around the world and in numerous festivals and presenting a saccharine sweet style of electro-tinged melodic rock with the sort of darkly enticing atmospheres and lyrical ambiguity that gives the genre such endurance and power. Just prior to social distancing necessitated by the COVID-19 crisis, ReGen Magazine had the opportunity to speak with founder and front man Jason Corbett about ACTORS’ music and just what makes the band tick, from the formation of the current lineup to the prolific touring schedule, some words about Corbett’s work as a producer of other bands in the scene, and touching on the comfort post-punk music offers to a world full of darkness.

To get some history out of the way, tell us about how the current lineup of ACTORS came together? 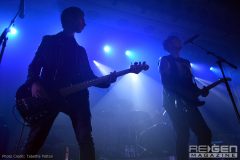 Corbett: The current lineup is the definitive lineup. It didn’t feel like a band before that. Having Jahmeel and Shannon join Adam and myself onstage was the missing link for us. It all just happened organically knowing each other in Vancouver.

What is the performing dynamic like among the four members?

Corbett: We play together to serve the songs and deliver the best show we can. We cherish our time onstage together, so we try honor that every performance.

Beyond the instruments, what roles do you all play in making ACTORS’ music?

Corbett: We support one other. The love we have for each other makes the whole experience of recording and touring a less daunting task. We put some serious miles on the road in the last two years, but when we come home and don’t see each other often enough, we actually miss each other. I’ve heard that’s rare for a band.

Since the release of It Will Come to You in March 2018, the band has been on a seemingly constant stream of touring. First of all, tell us about the experience of touring… what have you found to be the greatest challenges, not just from the physical standpoint, but mentally as well, and how do you feel you’ve been overcoming them? 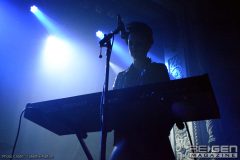 Corbett: Touring has its own unique challenges. We’ve lost jobs and lost relationships. But that’s life, isn’t it? There are no guarantees. That’s why we try to stay positive and humble. Not everyone is fortunate enough to follow their dreams.

Playing all over the world, what can you tell us about the various audiences you’ve played to? Or to put it another way, have you noticed a difference in how American audiences respond to ACTORS music versus European audiences?

Corbett: We’ve had great audiences in all the countries we’ve visited. We’ve been treated very well. I haven’t really noticed a difference other than the obvious language barriers.

Has performing your material to so many people given you a new perspective on the songs you’ve written?

Corbett: When you see people reacting to the songs live, you can feel what’s happening. That shared connection of emotion is truly what I’ve been after from the beginning.

You’d mentioned to me in conversation that you were looking to work on an album by summer of last year, but the offers kept coming in for you to play live. In what was has the extensive touring schedule affected the new material you’re writing? 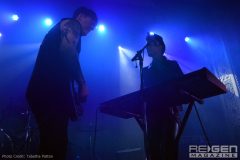 Corbett: It feels like time is accelerating. Keeping busy is good. Some down time and reflection are also good. When we would take breaks from tour and come home, I would immediately hit the studio and start demoing songs while my adrenaline was still pumping. Now that there’s a break long enough to finish the record, I have more than enough material to draw from. My sights are already set on the third album cycle and where we will be in two or three years. That excites me, and also eases my worry from the pressure of making a second album.

Regarding the lyrics, what would you say are some of the themes you’re writing about now?

Corbett: I would rather leave that to the listener’s imagination. I feel like good songs come through craftsmanship and being an open conduit to the universe and whatever energies that you’re picking up. I listen to the songs and they inform me what they want to be.

You performed at ColdWaves in 2018 and prior were scheduled prior to the pandemic to perform there again for 2020. Would you tell us about how you first came to be part of this eminent festival?

Corbett: Our label was unrelentingly hassling the festival coordinators. Once they listened to the album, they gave us a chance. I’m grateful for that opportunity and all the friends we made that continue to grow.

What are your thoughts on ColdWaves now versus when you were first asked to take part in it?

Corbett: Now we know people there. It’s more like visiting family that you like. (Laughter) That and we made it one line higher on the poster.

This year’s lineup also features other bands that, like you, present a modern spin on the classic post-punk sounds of the late ’70s / early ’80s. First of all, what do you feel it is about this sound that resonates with you now versus when you were younger or when ACTORS first started?

Corbett: The sounds of ACTORS never left me since childhood. It’s a mix of ’80s arrangements, the gloom of Wendy Carlos, the feel of a David Lynch movie, and on and on. It just took me years of exploration to mine those core truths and learn to produce them.

Secondly, beyond a wave of nostalgia, what do you think has inspired such a newfound interest? What is it about post-punk that is resonating with people today – both the bands and the audience?

Corbett: I have a theory that it’s the underlying bleakness of our culture – the fear of imminent darkness. In the ’80s, you had the threat of nuclear war with the Cold War. Now, we have terrorism, fascism, and radical climate change. It’s a scary time. We need to celebrate in the darkness, or it will devour us.

Besides ACTORS, you are a producer and mixer. Are there any specific bands you’ve worked with or experiences that have stood out to you in such a way that has affected your outlook on your own music?

Corbett: I’m learning all the time in that regard. I take my role as producer very seriously. If someone is going to trust me with their vision, that’s no small leap. I’m very excited about my work with Bootblacks. Their album will be coming out on Artoffact Records soon.

A quote from Joe Elliott (Def Leppard) has always stuck with me when he was talking about Mutt Lange’s influence on his band, ‘The role of a producer is to make you better than you are.’ Does this ring true to you?

Corbett: I would counter that by quoting Nile Rodgers, ‘My responsibility is to the artist first. There’s something that artists intrinsically know about their music and their fanbase that neither the record company nor the producer really knows.’