IAMX: Strength of Will0

Chris Corner of IAMX speaks with ReGen about the current state of the music industry and touches on the band’s most recent creations in the studio and onstage.

An InterView with Chris Corner of IAMX 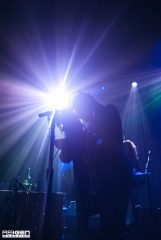 From his time as a pimp of all things sneakers, to his latest creation with his current project IAMX, frontman and multi-instrumentalist Chris Corner has used the world for a canvas with music as his paintbrush. His musical journey began in 1994 with the formation of the Sneaker Pimps, which accrued large success due to singles like “6 Underground” and “Spin Spin Sugar” sung by recruited vocalist Kelli Ali. But the Sneaker Pimps took an interesting turn by letting Ali go and giving Corner the mic permanently on the very next album. The band released two more albums and one EP before dismantling in 2002. That’s when Corner went rogue and created IAMX, a unique and artistic assault on every human sense.
In 2004, IAMX released Kiss and Swallow. Many of the songs were Sneaker Pimp demos that never came to fruition, but found new life under IAMX. The title track gained momentum and put Corner back on the map in a big way. Nine years later, IAMX has four more albums in its musical repertoire, including the most recent 2013 release The Unified Field. And for the first time since IAMX’s second album, The Alternative, Corner and his band mates embarked on a U.S. tour. On April 26, IAMX stopped in New York City at the Irving Plaza to perform in front of a sold out crowd. Before Corner took to the stage, he sat down with ReGen’s Richard Reich to talk about the current state of the music industry, the band’s latest creations, and the elaborate stage setup. Corner opened up quite a bit during the interview to show some of his vulnerable traits, and luckily for Reich, Corner didn’t come with knives to this InterView.

You have been active since at least the late ’90s. Obviously, the music industry has gone through a great deal of change since that time. What are your feelings on then versus now?

Corner: Well, I wouldn’t say it’s any less difficult for artists. I still think the industry in general is a struggle for the artistic mind. I think back then, there seemed to be a little more freedom in the commercial world to experiment a bit. On the face of it, it seems to have become very, very… plastic. I don’t want to make it sound as though it’s nostalgic or something, but there was a lot more dirt and a bit more freedom. It still isn’t my thing either way. I think just being a part of the industry was always very uncomfortable for me.

It seems like you’ve taken a very focused approach at staying as far from that as possible, while still remaining successful. 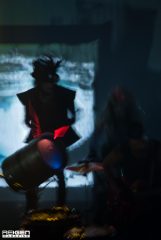 Corner: I think that’s what one of my major drives was – to prove that you can exist outside of that beast and still have some kind of career. I think it is okay to dabble with it. Sometimes, you do need the structure and the help of that system. I have, in my head, some kind of utopian idea of making music in the future, although I don’t know exactly what that is.

You mentioned bringing in outside production – producer Jim Abbiss – for The Unified Field, the benefits of which are obvious. Do you lose anything in inviting others onto your island, so to speak?

Corner: Well, you lose control. That’s the major problem with somebody like me. I think my need for control comes from my being not just protective of it, but possibly being deeply insecure. (Laughs) Once you invite somebody in, you invite them into your secrets and how you do things. You open yourself up to be judged. That’s the major stumbling block for me; that was the major stumbling block for me. Fortunately, I worked with somebody that already understood how I work.

Having previously worked with you for Sneaker Pimps’ debut…

Corner: Yeah. I think to work with anyone, for me, it would always have to be a long process. I really need to know the person and feel safe before I expose myself.

So, having previously worked with Abbiss, did you feel comfortable with him already or was the anxiety still there? 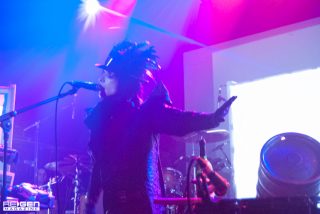 Corner: Still there! What I like about Jim is there’s a real no bullshit approach, but he is still very respectful to artists. There were awkward moments of tension in that I’m not used to being questioned by someone else on particular drums or whatever it may be that we were working on at the time. Not only was I questioning myself, but I think he was questioning his place as a producer and what he was bringing to the project, because obviously, I’ve produced all of the records myself previously to this. There were a bit of psychological ups and downs between us. However, in the end, it’s been really worth it for me just to progress socially as well. That’s always been a bit of a problem when it comes to music and that’s why I made it a solo project.

It’s clear that visual presentation is important to you. How vital is that to the total IAMX performance. Would you be as effective in the dark?

Corner: I don’t think so. I think what’s nice about the visual approach is you get to play. What I like about theatre and expressing myself in that way is that it’s not just all about the mind. I get to play. That’s what theatre gives me and there’s a lot of enjoyment in that and it’s true, real enjoyment. All performance is ridiculous in a way and, if you think it’s less serious because you dress up, I don’t think you get the point of what it’s all about.

What did you learn from Volatile Times and how have you applied that to your newest release? 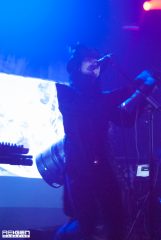 Corner: Volatile Times was exactly as it sounds. I think that was the peak of my inner struggle with working alone. Also, there was some kind of breaking point with me in terms of looking at the world, seeing the bad stuff and letting it in. Letting it in alone was a bit too much. I think that record was probably my most… self indulgent? I would say that it led me to need others.

To change your approach?

Corner: Yeah. It was an odd time as well, I think. Performing onstage was a bit odd for me. I wasn’t particularly happy at that time.

So, you are happier today… relatively so?

As happy as anyone can be?

Regarding Pledgemusic; obviously, you used that format for this release and, in your own verbage, you said ‘I’m not necessarily begging. I’m asking you.’ Are Pledgemusic and the various similar programs a reaction to where the lack of support for artists has gotten to, or are they simply a new tool?

Corner: It’s complicated. I was quite skeptical about Pledge at first; just because I didn’t really trust that people would give a fuck. I was quite negative about it. Once it took off and it worked…

Corner: (Laughs) Yeah, I changed my opinion about that. 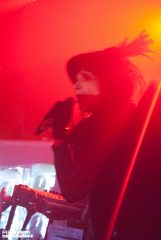 It must have been at least slightly bewildering to not only hit your mark so quickly, but to have exceeded it so far.

Corner: It was very exciting. It actually rejuvenated my… I don’t like to use the word ‘faith’ (pauses and takes a deep breath) my faith in people. What was really interesting about that was there seems to be this sort of culture that’s developed. People feel, because they are interactive, they can effect things; they become more giving than I think they would be in this platform.

Some sense of ownership?

Corner: Exactly. Exactly! That is great on the one hand; on the other, the commitment that came along with it… we made a menu that was quite unusual and offered many, many different things. In hindsight, I think it was a little too much. The commitments are a lot of work.

So, it was taxing on you as an artist?

Corner: Yes, but we learned from that. The ownership is really sort of interesting. They really do feel like they have more, perhaps because they have more direct contact with us. There is a bit more of a demanding feeling with the fan now, which is fair enough because they pay a lot of money. You have to give more to get more.

Would you use the same route again?

Corner: Yes. I think perhaps we might simplify the menu, but it’s been a positive experience.

You’ve been operating from Berlin for a few years now. What drew you there?

Corner: It’s sort of the artistic orphanage of the world. It’s very welcoming. It’s cheap and it’s sexy. There was a feeling of possibility whereas London was very sort of cold. Recently, I’ve spent a good deal of time in L.A.. 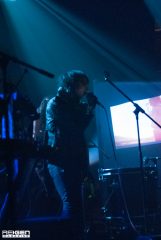 Coming from that background, how do you view the U.S.A.?

Corner: It’s just so full of everything, isn’t it? Though I used to be quite critical, there is something to be said of the hunger. The U.S. is sort of the big brother of the world. There is a strength in mentality.

Are you a political person?

Corner: Observationally so. I’m not active. I’m not very interested in particulates. I’m more concerned with the big picture, I guess.

What do you find sexy?

Corner: Well, strength of will is sexy – Germans. (Laughs) I’m not sure how deep you want me to go with this. I like discipline; sort of a counterpoint to my being a control freak. Boys, girls, it’s all fine. (Laughs) It’s really about the mind.

What’s been the highlight of your career thus far?

Corner: (Smiles) Today’s pretty fucking good. It’s great being back in the US… here, at this venue… tonight.

Corner: It’s got to be red wine. I had a good fling with vodka and apple juice for awhile, but I had to change that for sustainability reasons. (Laughs)