Hailing from Paris, France, Hante. brings her singularly evocative brand of darkwave to our shores with her latest album; here, she speaks with ReGen about her music. 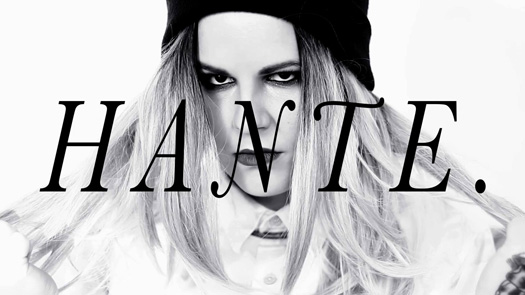 An InterView with Hélène de Thoury of Hante.

Part of the lasting appeal of Metropolis Records is the label’s efforts to bring to North American shores some of the best European electro, industrial, and underground acts. Among the imprint’s most recent signings is Hante., the darkwave project of Hélène de Thoury. Combining a coldly synthetic instrumentals with darkly warm and emotive melodies, the Parisienne artist’s latest album, aptly titled FIERCE, presents some of her most deeply striking material yet; as well, the album serves as a perfect introduction to the full scope of de Thoury’s talents, having not only produced and mastered the album herself, but also having created its artwork. William Zimmerman spoke with Hante. on behalf of ReGen Magazine, in which she lets us in on her creative and songwriting process from both a technical and an emotional standpoint, along with a few words about how her work has developed over the course of her discography, and more of what we can expect from her in 2019.

Would you give us a background on Hante. for the readers who do not already know you?

Hante.: Hante. is my solo project. I started it in 2014 in Paris, where I live and grew up. My music is a mix of synthwave and darkwave, between striking electronics and powerful melodies. It is dark, melancholic, intimate, but also danceable.

The video for the ‘Wild Animal’ single paints a very cinematic portrait, one that is very much an isolationist perspective; yet, the opposite is somewhat implied by the song title. Can you talk a bit about the song and how the meaning is reflected in the video?

Hante.: I wrote the song after watching the documentary I’ll Sleep When I’m Dead about the DJ and producer Steve Aoki. One scene inspired me particularly – he’d just found out that one of his best friends died and he has to play this night; he goes onstage, gives everything, and at some point, we realize that he’s crying. His long hair flies in the air and he looks like he’s going wild. The song is about this moment when you can’t hold back your emotions. We’re all trying to give the best image of ourselves, but the truth is we can’t be perfect. We are full of emotions, we are vulnerable, and we can’t hide it forever. A ‘Wild Animal’ is just the representation of our real selves, our basic instincts. For the video, I asked two of my favorite directors to shoot their vision of the song, so it’s their interpretation. The video explores the unconscious through projection of the shadow self, following someone trapped between dream and reality; she will find the beast who’s growing inside.

The music on FIERCE, while somewhat melancholic, also bears a cinematic quality much like the aforementioned video. You also had a video for ‘Living in a French Movie.’ How important to your influence are cinema and movie soundtracks?

Hante.: Cinema and movie soundtracks are definitely a big influence on me. You can find references from Thelma and Louise, Hook, or The Big Blue in the lyrics of my precedent album. When I was a child and teenager, I was listening to a lot of movie soundtracks; I discovered many bands thanks to that. For example, I discovered Radiohead with their beautiful song ‘Exit Music (For a Film)’ at the end of Romeo + Juliet, or Air with their amazing soundtrack for The Virgin Suicides. Those are music that still inspires me a lot today.

You have an interesting fusion of sounds. Who do you cite as influences both musically and vocally?

Hante.: Thanks very much! I think this fusion comes from the fact that my influences are pretty wide! I’m still very influenced by bands I was listening to when I was very young such as Queen, Guns n’ Roses, Radiohead, David Bowie, Tears For Fears, The Human League, and Depeche Mode… and then by some I discovered over the years and really touched me like Air, Sebastien Tellier, M83, Metronomy, Kings of Leon to name a few. But there’s also all this dark side that follows me since awhile; I was listening to a lot of industrial/metal bands in the ’00s and now, there are a lot of amazing synthwave artists who inspire me such as Xeno & Oaklander, Hørd, TR/ST, Boy Harsher, Selofan, Drab Majesty, and so many more. So, I guess all those influences end up creating the fusion you can find in my music.

Can you talk a bit about your studio; hardware/software set up that you used for the recording?

Hante.: I’m composing and recording everything in my bedroom. Most of the time, I’m even composing on my bed with some headphones on my head (the Beyerdynamic DT 770 Pro that I love), using Logic Pro X and a master keyboard (an Arturia Keystep) to find the melodies. The only hardware synth I used on FIERCE is the Korg Minilogue, which I absolutely love. I used it for some bass lines and also for some really cool arpeggiators. Once the music is composed, I record my voice (with an AKG C214), still in the bedroom. And then I mix everything.

The name Hante. in French means ‘haunt.’ Looking over your releases, how does this apply to your music and lyrics; even the creative process?

Hante.: When I’m composing, I’m totally obsessed with the song. I can’t stop thinking about it for as long as I’m not done with it. This is my temperament – I’m passionate, obsessive, and I think you can feel it in the music, and in the lyrics as well. I’m also obsessed with the same themes, especially the rejection of reality and the fear of losing my freedom.

There would appear to be an array of conflicting emotions implied by the song titles on FIERCE; for example, the hope of ‘Tomorrow Is a New Day’ or ‘Never Over’ vs. the loneliness of ‘Nobody’s Watching’ or ‘I Don’t Need a Hero.’ Was the process of recording the album therapy through conflicting emotions, or are the songs simply snapshots of different external moments?

Hante.: It is both actually. Of course, the more ‘positive’ songs have been written in the better days when I was full of hope and positive thoughts. But I’m constantly living in conflicting emotions. I can feel lonely and miserable during the day and then loved and lucky when I’m going out with my friends. ‘I Don’t Need a Hero’ is the perfect example of this conflict since what I’m saying at the beginning is not true at the end; like I was realizing though the song that I am not as strong as I seem.

You were a part of other projects, including Phosphor and Minuit Machine. How is the focus of Hante. different than these projects?

Hante.: The main difference is that with Hante., I can totally express myself. I can also write lyrics and the writing can be very liberating. But the price to pay is this loneliness. This is truly amazing when I compose some music and Amandine (my partner in Minuit Machine) comes up with awesome lyrics and vocal melodies that fit perfectly the music. I find it pretty exciting because it makes me rediscover my music and see it with a different angle. What I can’t do in Hante., it’s really hard to put things into perspective. It’s a lot of work but having both makes me feel complete as an artist and never frustrated.

How is FIERCE different than your last full-length album, Between Hope & Danger, and how do you feel you’ve developed as a creator?

Hante.: Each album is a part of me, a part of my story, the representation of who I am, what I love, what I feel when I’m composing them. That’s why they are different, but not that different because obviously, I’m still the same person! But I guess you can see in the titles what changed between the two albums. During the composition of Between Hope & Danger, my world was changing, evolving, and I was scared. During FIERCE, it was more a question of introspection, of self-acceptance, how to find the strength to fight our inner demons. I’m still not sure I found the answer though. (Laughter)

What plans do you have for the upcoming months in 2019?

Hante.: I have completed a tour in the U.S. in April/May with my mates Box and the Twins; I will play a few festivals this spring and summer, and will be touring in Europe at the end of the year with a very special guest to be announced soon! I’m also finishing a new album with my other project Minuit Machine to be released this spring on my own label Synth Religion and will be touring a lot after this as well. 2019 looks pretty busy but exciting!