God Module’s Jasyn Bangert speaks with Dawn Wood about his upcoming headlining appearance at this year’s PIGFest 3.0 along with some history behind his primary musical outlet.

An InterView with Jasyn Bangert of God Module

God Module has been crucial in the gothic and electro scene since the mid ’90s. While originating in Florida, the Seattle area has been blessed with the band’s tasty dark electronica presence since 2006. God Module is set to headline at PIGFest 3.0 in Portland on Friday, August 10 this summer. Dawn Woodkill, on behalf of ReGen Magazine, had the opportunity to InterView front man Jasyn Bangert about the band’s upcoming PIGFest appearance and life in general as one of the most revered, relevant goth/electro bands today.

What was your first introduction to the music scene and how do you think God Module has evolved over the years? 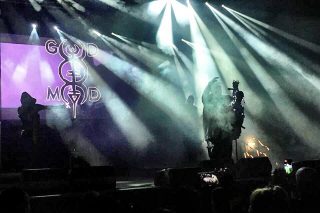 Bangert: I found my way to goth and industrial from an interest in punk at a pretty young age. Bands like The Misfits and The Damned that had a dark image from the start brought me to Christian Death, Bauhaus, Siouxsie, and The Cure. Following that path, I was introduced to Skinny Puppy, MINISTRY, Leæther Strip, and all the WaxTrax! and Zoth Ommog stuff when I was about 15 and things just went from there. I started going to clubs and shows and this music, its aesthetics, and scene became a huge part of my life. After a while, I realized that the end game was to be on the stage instead of in the audience and for my own music to be what people were dancing to in clubs. God Module has been around a long time, but I don’t think of it as an ‘older’ band. Personally, I think the last three records are the best so far. It is a strange situation overall because even as time passes and I get older, I can’t really imagine a time when I would stop making music as God Module. This project is as much a part of me as I am of it. It has always been a very personal artistic outlet for me, so of course, there is always a constant evolution in the themes of the lyrics, as well as the sound of the project over time. This has to happen because I do use God Module to express what I am thinking and feeling when the records are written. Sometimes my lyrics are veiled behind imagery that might seem obvious at first, but if you actually listen to the songs, there is always something much deeper hidden under the surface.

Who would be your dream collaboration be with?

Bangert: I think it would be to make a record with Robert Smith.

What keeps you grounded and motivated?

Bangert: My motivation comes from loving what I do. I love creating music and being lucky enough to have people want to hear it and see it performed live at shows. It has always been a daily job for me and a lot of that comes from me being a bit of a control freak when it comes to God Mod. I stay grounded by never taking anything for granted and, as hard as it is sometimes, not taking everything way too seriously. Nothing is guaranteed.

Tell us about your upcoming projects/gigs? 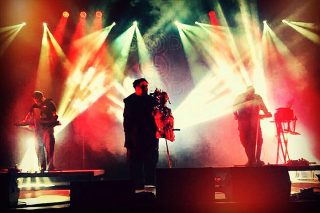 Bangert: I just got home from Wave Gotik Treffen in Germany a couple of weeks ago where God Module headlined the main venue, Agra Hall, on the last day of the festival. This was something very special to me and it meant a lot to have this be the third time we have played there and to have made it to where we are now. We have the PIGFest booked in Portland, but other than that, we are open in regard to God Module playing live the rest of the year. We have no plans to tour until I finish the new record, which I am working on now. My hope is to finish it over the summer and maybe have it out this Fall or Winter with a U.S. and European tour to follow. But no promises on the time frame at this point.

God Module is known for being a band that keeps a close connection with its fans; how does this relationship affect the band positively and (if at all) negatively?

Bangert: I can’t think of any negative aspects of having a close and strong fanbase. We are very thankful to the people who, in this fucked up age of the music industry, still come out and see us and buy our merch, which in return allows us to keep doing what we’re doing. Of course, we would appreciate it if you buy our music in digital or physical form, but the most important part is that you listen to it! So please, no matter how you get it, share and play it for your friends, dance to it, and request it at your clubs. That’s how we have been able to survive over the years. Without our fans, none of this would happen.

Your reputation is as being super down to earth and approachable. You have played years of numerous shows with many bands. Have you ever had any experiences with ‘rock star attitudes’ that you have taken to heart to remain humble and approachable? 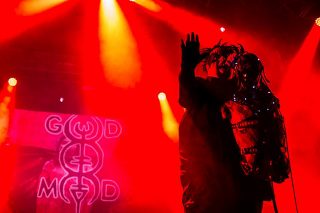 Bangert: There are some amazing people in this scene and there are a few obnoxious trash people in this scene. And here is my top five listing of them… just kidding. But with no names involved, you have to remember that everyone in this world, no matter what they do, is just human. And as with every aspect of human life, some people just fucking suck. Not everyone is going to be a great and amazing person. Egos and ignorance don’t mix very well. But after a time, it almost becomes sad to watch people squander chances and self-destruct due to thinking or acting like they are way more than are. I have seen it in passing as well as with some people I considered friends in the past.

Where do you see yourself in five years? Any bucket list goals?

Bangert: I’m sure I will still be doing God Module. I also want to continue to evolve with my newest project, Hexheart, as well as a couple other secret projects I have in the works. On the bucket list is performing in Japan and Russia. We have played all over the world, but I still have not made it to these places. So, who knows?

Where are some of your favorite places to play to date?

Bangert: In the States, our favorite places to play would have to be Das Bunker in Los Angeles, StiMulate in New York City, and The Church in Dallas, TX. We’ve also had a great time playing in the U.K. and Australia in the past.

You are the headlining act on the opening night of Portland’s PIGFest this year. How did that come about?

Bangert: I think on the first two PIGFests, the P stood for Portland – I’m not fully sure about that, but I think it’s true, so we were not asked being that we are based near Seattle. But this year, it has transformed into the Pacific Northwest Industrial Gothic Festival, so I think it only makes sense that we would be involved to some degree. The festival is full of some great bands this year and we really look forward to performing!

What is your favorite memory of 2018 thus far and what are you looking forward to? 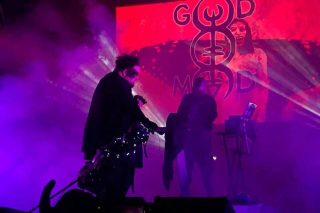 Bangert: I would have to say that the show we just did at this year’s Wave Gothik Treffen was my favorite so far. The energy as well as the size of the crowd is going to be hard to beat.

If you could construct your own music festival, what would it look like?

Bangert: It would be really fucked up and strange for most people. I don’t really have any boundaries when it comes to music I like, so it would be all over the place. I’d say right now off the top of my head, I’d pick Cold Cave, Kanye West, Tiger Army, New Order, KANGA, Childish Gambino, AFI, Chelsea Wolfe, Drab Majesty, Social Distortion, Rihanna, Hocico, The Cure, White Lies, Calabrese, and The Faint.