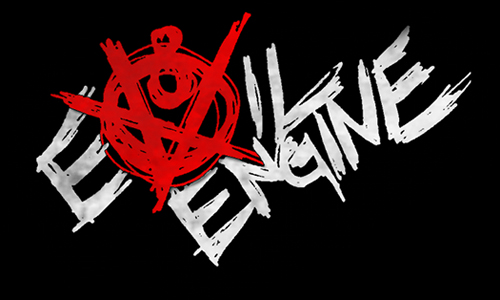 An InterView with Mike Skull of Evil Engine

Evil Engine is Chicago angry punk rock at its finest. Formed in 2016 by seasoned musicians Kryssie Crisis, Jamie Booth, Collin Holmes, and Mike Skull, the project blends skater punk, thrash metal, first wave, and ’80s hardcore to create a gritty, progressive sound that stays true to the vitriolic energy and urgency of punk. With the recent release of the Nullius In Verba EP, along with several upcoming performances, the band is on a righteous path to stay productive and musically on the move. ReGen Magazine had the chance to speak with Evil Engine bassist Mike Skull to discuss his music, creativity, and what’s next on the horizon.

Your band is a tight unit and you all really seem to enjoy yourselves. How did you meet with Kryssie, Jamie, and Colin and decided that you wanted to work with them? What is the working dynamic among you guys like, and what are everyone’s roles in how you all approach music production? 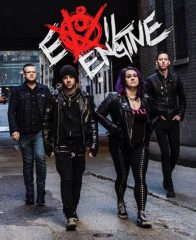 Skull: I met Kryssie through a mutual friend on Facebook; she thought I was delightfully snarky and we were both in bands so we hung out. When the first incarnation of Evil Engine went tits up, Kryssie auditioned and it was a no brainer. I met Colin through Kryssie after things weren’t working out with our previous drummer. Jamie I’ve known for 17 years – we grew up playing music together, both punk and metal respectively, and the timing was right with this project.
As far as writing, I had the concept of the project for a few years before finding everyone, and had about 20 minutes worth of material before it all came together. Lately, Jamie and I have been writing the music and lyrics, while Kryssie is responsible for vocal arrangements, and Colin is left to compose the rhythm section. Everyone is responsible for their own instrument parts, so there’s no overseer there. If someone has an idea for a song, they usually present a roadmap and we put personal tweaks and touches to it. We try to be as democratic in the band as possible as far as equal say and responsibility.

You have played with several projects throughout the years – a little metal here and some industrial and punk there. What is different about Evil Engine in comparison to other bands you’ve collaborated with and what has it been like for you as a performing artist to switch between genres? What does each style of music mean to you and how do you approach them artistically?

Skull: Evil Engine is much different from the previous projects I’ve been a part of, as this is my brainchild and it’s nice to not be a hired gun. I’ve always been a punk bassist first and foremost, but I have been asked to do several projects of different genres over the years with little to no say on writing and being more of a stage prop or live player, and I went with it due to being creatively void of a project since my first punk band, The Vile. Hands down, this is my greatest achievement musically to date; I’ve played the best venues to the best crowds and the most artistically proud of this band and the music we create.

Your band has been performing a few shows around the Chicagoland area since Evil Engine made its debut. What have been some of the more memorable moments from the performances you’ve played? What would you say make an Evil Engine live show something to see and what sorts of challenges has the band faced in bringing their musical vision to a live environment?

Skull: I have to say we love Doll Skin. They’re such a talented bunch of young ladies and I love them all like little sisters. Any gig is a great gig with them. The recent 88 Fingers Louie show at Metro was great! They’re all a bunch of great guys and I can’t thank Dan and Dennis enough for asking us to be a part of their release show at the legendary Metro Chicago. And then there was Skatopia – an 88-acre anarchist skate commune. We played next to a full pipe and a peanut bowl with one of the most passionate crowds we’ve played to. We were also one of the last bands to play the NYC landmark Webster Hall before it was sold to Jay Z and converted into a hip-hop venue. And I seriously love all the house shows; the patrons are hungry for good music and are incredibly supportive from first band to last. 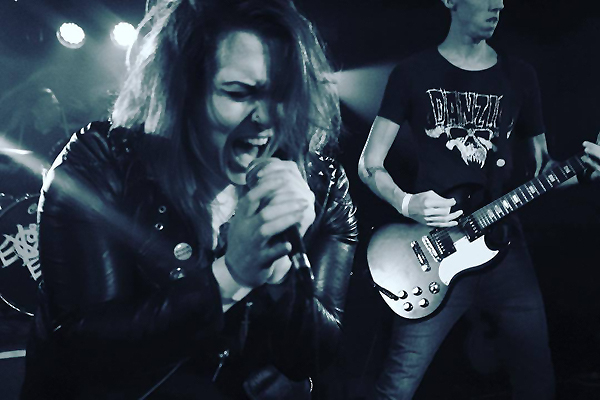 Evil Engine is a spectacle. We are definitely bringing the early Epitaph-style skate vibe to the 21st century with super high energy songs with thoughtful lyrics, all the while being sung by a female lead vocalist who has a great set of pipes, which is unique. In modern punk, you’ll either find bands with women at the helm who scream or sing emo.
Most of our songs are written from Jamie’s and my perspective, and they’re gender-bent by Kryssie, which is kind of fun. We touch on all aspects of punk and have a myriad of subgenres throughout our sound, including first wave, Oi!, ’80s hardcore punk, and even thrash.

Recently your band came out with the EP Nullius In Verba. Are there are any common themes in the songs on the EP, or any particular subjects or themes that Evil Engine is meant to explore, especially in contrast to his other projects that you’ve been involved in? 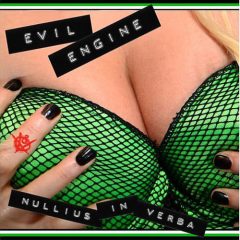 Skull: There is one common theme in our band: NO LOVE SONGS! (Laughter)
There are so many subjects that need attention, and they produce much more sincerity when written rather than a breakup song meant for audience reach. Our main objective is to write about things people don’t think about; on Nullius In Verba, we have written about the typical punk rock themes including riots, politics, the apathy and decline of modern society, but with an atypical approach usually involving more poetic phrasing and metaphor in a sarcastic demeanor. We have a song written entirely in double entendre about both electric current and social uprising, which is one minute and forty seconds long, yet took me three months to write because I had to consult electricians and electrical dictionaries in order to accurately describe the subject matter both ways.

Are there any other musical side projects and collaborations in the pipeline?

Skull: I’m far too involved in Evil Engine to begin thinking about side projects at this stage. My mentality is if I’m writing songs and I’m proud enough to put them out, they should be Evil Engine songs.

What do you do in your spare time when you’re not making art?

Skull: That’s nonexistent at the moment! (Laughter) All my free time is either making merch, practicing, writing, or promoting on social media and in person. The band owns my soul for the foreseeable future.
However, I do enjoy naturalism, outdoor extreme sports, and photography/videography.

Like many artists, you have had some choice words to express regarding the political climate in our country. What particular experiences have shaped your views?

Skull: We are living in such political times right now that it’s unavoidable, such as DaPL, the orange turd’s charade as president, geopolitical inflammation, climate change, science proving to be the ultimate winner in a battle of science vs. religion, etc. The very name of our EP is the motto of the Royal Society, which was the first establishment to really rebel against the ancient religious stranglehold on society’s views of science and introduced a lot of principles still used today such as the scientific method. They in themselves had a very ‘punk’ attitude towards bucking the system and always questioning authority.
As of right now, our next album will be incredibly angry and socially and politically driven. I’m looking forward to releasing this material.

Are you still playing guitar or does bass dominate everything you do musically nowadays. You’ve always been great with both.

Skull: I’ve only played guitar in one band of the eight projects I’ve been involved with. Everything else has been bass. Also, thank you!

What words of advice would you have to say to upcoming bands out there trying to get their music in front of the world?

Skull: If bands want to get their music out there, play everywhere. Don’t settle into a regional rut and play the same venue several times a month unless you’re a cover band, which in that case, try for residency.
Social media is your best friend; use every possible platform available to you and whore yourself on there. Also, be aware of other bands and their happenings, and learn to cross-promote with these bands. We have several bands that we promote on our page and they do the same. You reach a much wider audience that way.
A good word of advice is do not gig until you are ready. I’ve seen too many bands that have the potential to be great, but are either underdeveloped as players or as a unit and fall to the wayside because first impressions are everything in live entertainment. Nail your songs, make great merch, offer any kind of tangible music that the audience can take home with them, whether it’s a CD, tape, vinyl, whatever. Let them leave with a piece of your band and something to remember you by.