A new lineup, a new look, a new album – but it’s all that Everpresent has ever given its audience, merging atmospheric melodies and sensual grooves; vocalist Matthew Cahoon invites ReGen to his Omega Point. 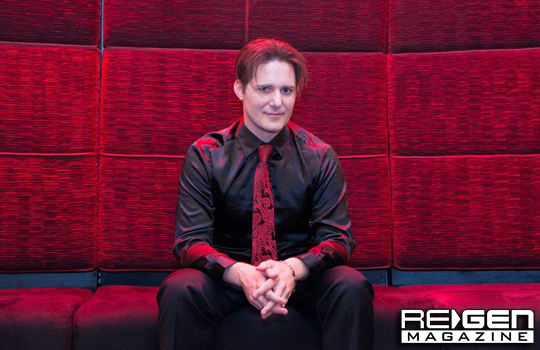 An InterView with Matthew Cahoon of Everpresent

The ever shifting atmosphere and visual perspectives of Boston electro-pop band Everpresent continue on its singular trajectory with the late 2015 release of Omega Point; showcasing band leader, vocalist/programmer Matthew Cahoon’s transient musical vision with a mélange of soulful electronics, danceable hooks, and techno/pop sensibilities, Omega Point brings the band full circle with a revitalization of many of the band’s original aesthetics – from the red and black color schemes to augment a slick, sensual imagery, to the return of longtime collaborator and producer Steve Catizone. Cahoon speaks with ReGen now on the development of Everpresent’s sound for this latest musical outing, touching on the video for ‘Hypnotic,’ his standing as a voting member of National Academy of Recording Arts and Sciences, and just how developments in musical technology and the internet can aide today’s up-and-coming musicians.

In every Everpresent album, the band seems to undergo a change in lineup and image. First of all, what can you tell us about the lineup for Omega Point and how it came together? In what ways do you feel this change in personnel has given your music a different character from past releases? Conversely, what do you feel are the essential elements that must remain in place to call it Everpresent? 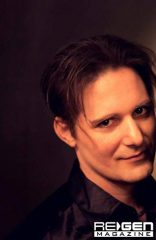 Cahoon: Yes, it is true that I get different session musicians for both recordings and for shows depending on what I’m looking for artistically for the new material and evolution, and also what kind of vibe and energy I’m looking for regarding live presentation. For Omega Point, it was done more like a project rather than the more ‘band’ feel and larger group of collaborators that contributed to Introspekt. It was basically myself, guest vocalist Camila Alves, and producers Ryan Hinkle and Steve Catizone.
Ryan and I used a whole new bank of sounds to keep things fresh, as I wanted to change things up to a more dance oriented techno/modern pop sound in contrast to the more atmospheric concept record that required more organic and warm sounds in Introspekt.
So, I brought the songs in written more acoustically and we built the sounds and I played the parts more on the spot in the studio and Ryan had more input into the sounds. Camila was brought in through auditions to contribute a more soulful, low register pop sound that would be accessible and complement my tenor sound. She did a great job of coming up with some great vocal harmonies that brought in a jazz influence and also translated my spoken word parts into Portuguese, which is a new element never used before in my music – a different language. It adds a Brazilian flavor to my sound, thanks to her.
The change in personnel has kept the sound fresh and challenged me to grow as a musician as I get people that have different strengths than me, so we can learn from each other. But the consistent sound of my voice and the sensual vibe and rhythmic grooves, I think, remains consistent to Everpresent. There needs to be a consistent element of darker lyrics that can be both thoughtful and provocative within a catchy format (with the exception of Introspekt, which was more out there), but still the atmospheres will always be there in some form. 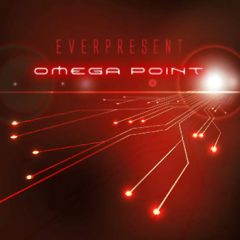 From the blue/white of Interospekt only a little over a year ago to the red/black of Omega Point – once again, the question must be asked about the color schemes and how they are representative of Everpresent’s sound/style with each release?

Cahoon: Yes, the red and black… that is intentional as a return to our original colors that were present in the 2002 and 2004 releases, but unlike those more goth rock ones, this was an updated modern pop, slicker take on those colors. But songs like ‘Intoxicated’ brought back some of that excess, but again, in a slicker format.

You’ve maintained a consistent video presence with each release, with the video for ‘Hypnotic’ being the latest example. First of all, talk to us about the video’s conception and in what ways the visuals complement the subject matter of the song. Secondly, how do you feel today’s audiences respond to music videos versus how they may have in the heyday of MTV more than two decades ago? Or to put it another way, in what ways do you feel the internet and modern technologies have affected the way audiences absorb new music (bloated a question though that may seem)?

Cahoon: The video for ‘Hypnotic’ was meant to capture two elements of the song – I wanted a club feel and atmosphere, which we had never done, and as the music is more dance and techno, I wanted us to be in a dreamy, dark, but more fun atmosphere; being lost in a spooky club, but with people still enjoying themselves. The slickness of our outfits is geared more towards pop, but again, the non-pop lyrics add that edge, so I think we captured both. 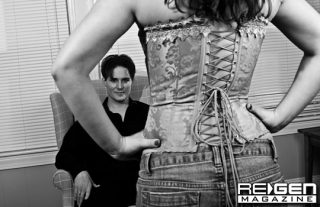 As far as videos today, I have to admit having grown up in the rise and prime and pre-internet era of MTV, I was inspired by that period where the channel showed full videos, and live music, and interviews, and that was the content. I think that there are many advantages to gaining a wider audience and reaching many more people through today’s technology, and that is what is better about today, and it has directly benefited Everpresent and gained us thousands of fans, so I am grateful, but I do wish that there was a longer attention span for listening to full albums and watching videos all the way through, and turning off all phones and other distractions. I would like to see more of that – soaking in layers and really studying the music one likes these days, and then using the internet to learn more. A combination is ideal.

Omega Point reunites Everpresent with Steve Catizone, who worked with the band as far back as the original debut. What was the working dynamic like with him this time around, and in what ways do you feel your working methods corresponded vs. how they did more than a decade ago? Also, how do you feel his cooperation with producer Ryan Hinkle worked out and brought out the best in Everpresent’s sound? 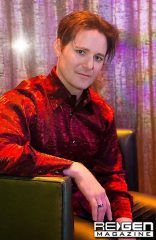 Cahoon: Steve is a brilliant producer, keyboardist, and vocal arranger, and also a good friend of mine for many years. He was a mentor to me during the first two albums in 2002 and 2004 and I have learned a lot from him. This time, after we both have grown so much, it was like coming home but with renewed comfort and confidence as he added his production touches, did the remix of ‘Hypnotic,’ and did the final mix. He’s friendly, professional, and exceptionally gifted. Ryan actually was mentored and taught by Steve, so there was a great synergy between the three of us.

Apart from Everpresent, you’re an active voting member for the National Academy of Recording Arts and Sciences. What can you tell us about your position in this organization and what it entails? Also, how do you feel your membership has given you a broader view of the current musical landscape – not just in terms of the artists and what they’re creating, but also in what audiences expect and look for in music today?

Cahoon: My contribution to the NARAS is voting for artists in certain categories such as Record and Album of the Year, and Best New Artist, things of that nature. I also get to attend different events if I am available. It’s a confidential voting process but very easy and I was invited to be a part of it in 2010. It’s helped me the most by connecting with other artists and learning from them and also learning about ever expanding technology and upcoming learning opportunities.

What’s next for Everpresent? 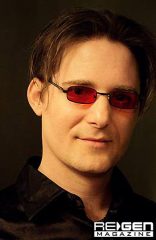 Cahoon: I have a big radio interview and songs to be played coming up at Boston University on February 22 on the show BU in the Morning, which I’m very excited about as the show has great ratings. There’s been tons more radio and video play of all the songs in the Everpresent catalog, and I was honored to win several Akademia song awards for different songs from Phoenix, Introspekt, and Omega Point in 2015 and got several honorable mentions in January for several songs as well from the Song Door songwriting contest. I am very grateful for these things.
But there are much, much bigger things coming in 2016. The team has lots of new things in genesis, and of course, a new metamorphosis will take place soon, but things are expanding exponentially this year, so watch for it!
Thanks so much for this interview and to ReGen and also to all supporters of my work for so long!