Be My Enemy InterView: New Waves of Defiance1

Taking a satirical stab at the culture of the western world, Be My Enemy’s Phil Barry speaks with ReGen on what is yet to come from his maniacal techno/industrial rock hybrid.

An InterView with Phil Barry of Be My Enemy and Cubanate

From the band’s inception in 1992 until its dissolution in 1999, Cubanate was one of the industrial music scene’s most aggressively singular entities. Heralded for merging the caustic sounds of distorted guitar with the pulsating beat and acidic synths of techno through such seminal albums as 1995’s Cyberia and 1996’s Barbarossa, as well as eventually incorporating drum & bass and breakbeat on the band’s 1998 album Interference, the duo of Phil Barry and Marc Heal would come to be known as an influential force in the waning years of the WaxTrax! era. In 2009, after years of silence, Barry returned to making music with the debut of his own project, Be My Enemy. Picking up the pieces where Cubanate left off, Barry brought his mix of scathing guitar and searing electronics into a modern age with the album This is the New Wave, appeasing longtime fans just waiting for that recognizably abrasive sound. Tackling topics from all across the range of western culture, This is the New Wave offered to the new generation a familiar voice from the past with a fresh new spin that has seen Barry bring his musical talents to such groups as Malakwa and Je$us Loves America. Now with two new singles to hint at what is yet to come, Barry speaks with ReGen about the development of Be My Enemy’s music along with a few hints as to the current status of his previous band, while also touching on his thoughts on the state of modern music and his place in it.

Let’s start with your most recent release, the track ‘To Protect and Serve’ via your Bandcamp page.
Since your debut album, This is the New Wave was released in 2009/2010, what was the reason for the long wait between releases? 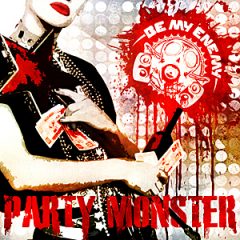 Barry: I’m my own worst critic. I wanted the second BME album to have 11-12 great songs on, all killer/no filler as it were. So I set myself a target of writing 20+ songs and choosing the best of the bunch. It took longer than what I thought it would, but it does mean I have a lot of material to release. So expect an album, which is called The Enemy Within, also couple of singles, and an EP or two this year. I’ve also released a digital-only single on February 14th called Party Monster. It has a video, which was made by MalakwaProd, which is rather fun. ‘Party Monster’ is on the new album, but the single has four remixes and three new BME tracks, which will not be on the new album.

As well, you released a track on the Intravenous Magazine compilation.
In what ways do ‘Look Who is Laughing Now’ and ‘To Protect and Serve’ progress the sound of Be My Enemy?
Was there a difference in your approach to songwriting or production with these tracks compared to This is the New Wave?
Will these songs be featured on the next Be My Enemy album?

Barry: ‘Look Who is Laughing Now’ is an exclusive track made for Intravenous Magazine; it won’t appear on anything else. ‘To Protect and Serve’ is on the new album, although if truth be told, I wasn’t going to put it on the new album, but I’ve had such a great reaction to it that I realized it should go on. Probably one of the reasons this album has taken longer to write is the lyrical aspect. When I wrote This is the New Wave, I was relatively new to lyric writing and I think it shows. I think this album is much better lyrically; I’m much happier with it in that aspect. I also feel I have found my voice now. I was very much still trying things out on the first album. I still can’t hold a note but some of my favorite singers can’t either.

You’ve mentioned releasing a new digital-only single, and that does seem to be the norm now for artists to release albums in multiple formats while relegating singles to the digital-only route.
What are your thoughts on the effectiveness of this approach compared to the time before digital formats?

Barry: It’s the cost effective way of getting a promo out. Singles are a promotional tool for an album. In Cubanate, we released a few singles on CD and vinyl, but they were mainly free promos for DJs from what I remember, so that would have lost the band money.

In relation, the appeal of physical formats seems to move in cycles – i.e. vinyl and cassettes. Do you feel these cycles have any effect on how artists pursue different avenues to release their music? Or if not other artists, how about yourself?

Barry: I love the fact that vinyl hasn’t died. I have a turntable in my living room with several hundred vinyl albums, so I would say that. As a fan, having the option of being able to get vinyl as well is great, especially if it’s an album I really love. There is a tune on the new Be My Enemy album called ’33 1/3,’ which in my mind is the end of side one and gives the album two different sections. I also think the optimum album length is between 40 to 50 minutes, which is very much a product of the vinyl era. 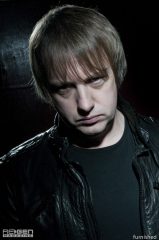 Sometime after the release of Be My Enemy, it seemed like you and Marc Heal were bringing the band back. Can you tell us more about the current status of Cubanate?

Barry: We got together in the studio for the ‘We Are Crowd’ song, which was great fun to do – quite strange being back in the studio after 13 years. It was like an alternative dimension Star Trek episode. Things kind of looked the same but were different; we both stood over the poor engineer shouting at him to turn up everything louder than everything else. The only difference was we didn’t spend half the day down the pub with me thrashing Marc endlessly at Pinball. Are there any pubs in London with pinball machines in now? Anyway, I have no idea if we will ever do anything ever again whether recorded or live.

You’ve long been known for your integration of guitar with acid synth and techno, as well as integrating breakbeats and drum & bass, which was pretty revolutionary when you first did it. While Be My Enemy certainly continues in that vein, many other acts since Cubanate have done a similar merging of styles. What are your thoughts on the current state of electronic/rock music, and your place in it?

Barry: Lots of great new bands appeared in 2013. I thought it was really exciting. I haven’t been inspired by new bands in ages. I am so glad some of the new bands have rejected the naff trance influence and gone back to those old industrial records for inspiration. Bands that merge styles? I’m bored of guitars and dubstep already and anything where autotune is the vocal performance I hate. My place in electronic rock music? I just try and be myself now. I’ve got my voice, my messy guitar playing, and my daft way I program stuff. I hear loads of fantastically programmed electronic music, but it’s boring and faceless; it could be anyone in a million. I think I have developed my own niche; I should of done by now.

‘To Protect and Serve’ seems to follow in the vein of songs like ‘Start the Revolution’ and ‘All American Psycho.’ What are your thoughts on American culture/society, and how do you feel those views have developed since you first started making music? 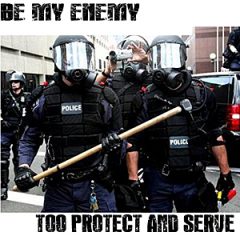 Barry: It is western culture really – anything that is good is monetized, corporatized, and then has the soul sucked out of it so it can be sold for mass consumption. ‘All American Psycho’ was very much about the media reporting of horrible tragedies; Tragedy Porn basically. ‘To Protect and Serve’ was written when the Occupy movement camps where being smashed up. When I first started making music, I wasn’t politically aware at all; shit didn’t affect me so why should I care? Perhaps society was different 20 years ago, I can’t remember. It didn’t seem to be as unfair as it is now. Then the internet happened and perception changed, the world became smaller. I can now get all sides to every story avoiding the corporate media lies and disinformation and make up my own mind.

You’ve also contributed guitar to various bands like Je$us Loves Amerika and Malakwa. Obviously, one has to like the music one is contributing to, but besides that, what is your criteria for who you will work with as a guitarist? 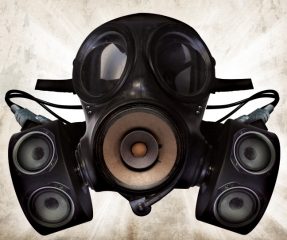 Barry: I approached Malakwa. I loved ‘Make Up Your Rules’ and the album Street Preacher and sent them an e-mail telling them that. With JLA, I saw them live and just thought to myself, ‘Why isn’t this band better known?’ Mangadrive is another. I love the bonkersness of psy-trance, so I got in contact. Kiss is Kill is another. It’s the power of social media really; it’s good. My Criteria? There has to be sonic space for guitar to fit in; also a bass line that isn’t a total mindfuck because then its root note power chord stab time and you don’t need me to do that.

Now that you’ve mentioned artists that you would like to work with, can you tell us of any that you have that we can expect a new release from to hear more of your work soon?

Barry: I haven’t got any new releases with other artists lined up. I’ve been so wrapped up in the Be My Enemy album that I haven’t had the time. I keep getting remix requests for remix albums, which is boring. I did say yes to one the other day, but I really love the band. 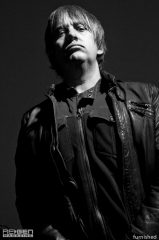 Barry: I realized the other day that lot of my favorite Brian Eno ambient albums like On Land or Apollo have guitar all over them, yet they are probably known as synth albums. Likewise, all the bands like Can or Neu! were doing guitars and electronics before I was out of nappies; also those ‘Berlin era’ Bowie albums are synths and guitars. Come to think of it, I’ve always listened to music which has been a fusion of electronics and guitars. Newer stuff? I love Adrian Belew’s stuff with NIN. I think it is really exciting guitar playing and Robert Fripp is a such genius – that guitar line on Bowie’s ‘Fashion’ is still mind blowing and is one of my favorite bits of guitar playing ever. Are there any new bands doing this kind of guitar playing on new electronic albums? If I had the chops and time, I would spend time doing that kind of stuff. I think there are still sounds to explore there.