Paving the way for a fresher take on a familiar style, Die Robot bassist Barbie Saint speaks with ReGen about what audiences can expect from the Technopunk band in 2018 and beyond.

An InterView with Barbie Saint of Die Robot 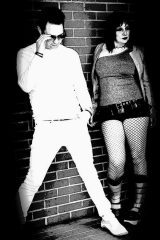 From the ashes of Pop Dolls comes Portland, OR’s Die Robot, delivering an onslaught of industrialized punk/rock and infectious electro. Formed by Barbie Saint and Vince Christian, and featuring drummer Angela Halo and producer/keyboardist John Case, Die Robot’s sound draws on a diverse but uniform set of scathing sounds, filtered through the band’s own unique vision – melodic but abrasive, punky yet tuneful. The band’s engaging live shows have become the stuff of local legend in the Pacific Northwest, garnering numerous high profile shows including performing at this year’s PIGFest 3.0 – a showcase of the region’s goth/industrial scene. With this year’s release of the band’s debut Technopunk EP, Die Robot stands poised to reach beyond the confines of being a local favorite and pave the way for a fresher take on a familiar style. ReGen Magazine is grateful for the opportunity to speak with Barbie Saint about Die Robot’s history and musical development, touching on the roles of the individual band members as well as the technology the group utilizes and even custom creates, with a few hints of what is yet to come.

According to the band’s bio, Die Robot began in 2012 when you and Vince Christian moved to Portland and met Angela Johnson. How much of Die Robot’s music, at least in the beginning, stemmed off from what you and Vince were creating in your previous band, Pop Dolls? Was there a conscious effort to continue in a similar vein or to start with a fresh new style? 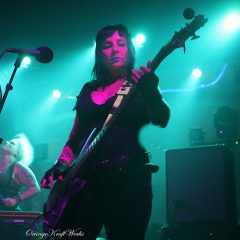 Saint: Oh yes, definitely, but it wasn’t really a conscious effort – it kind of just happened naturally. Pop Dolls was a lot more synthpop. When we finally moved to Portland, we had the desire for a harder, more industrial sound. We were in a transition mode; we had just moved across the country. Vince and I also decided to switch instruments too, so he’d sing and I’d play bass, witch I fell in love with to the point that I didn’t care to sing anymore. I still do backup vocals though. (Laughter) When we did that, our synthpop progressively became more of industrial/rock, right fucking there. Also, we met Angela, our drummer, and so we thought it was best to change the band name. And yes, at Die Robot’s first shows, we played some of our older favorites songs, like ‘Move Along’ and ‘Magazines.’

What is the writing dynamic among the band members? The liner notes state that you and Vince write the music and lyrics while John Case handles the production end. To what extent do John and Angela participate in the creation of the music? 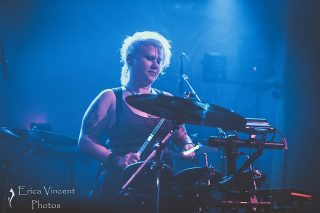 Saint: All Die Robot songs are written by Vince and me; he is truly the best though. We’ve been writing songs together for 10-plus years now and we are really close friends, so there are no egos between us. Angie is our drummer; she recorded some of the drum parts, but some of the drums are also programmed by Vince, so the recorded drums on our new album Technopunk are part analog, part machine. Our producer and studio keyboardist John Case – a.k.a. John Irish (RMLfx Owner/Creator and former keyboardist of 16volt, H3llb3nt, and Dead Animal Assembly Plant) – recorded some of Technopunk‘s keys and synth parts. He also contributed with some great ideas and most importantly the opportunity to learn and record with some amazing gear for the first time in our career. He is not just a producer to us; we consider him an honorary member of Die Robot, and we learned so much from him.
For our live shows, we sometimes had invited other rad musicians to play with us onstage, and we will continue doing that.

You’ve performed numerous shows in your area opening for several big names, and you’re also performing at the PIGFest 3.0. This might sound a bit arrogant, but what would you say distinguishes the sound of Portland and the Pacific Northwest, and where do you see Die Robot fitting in or leading in that regard? 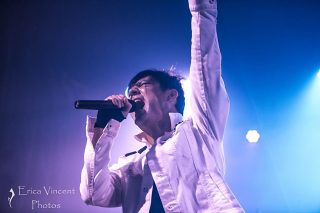 Saint: It’s hard to say. The sound of Portland right now is like a lot more hipster than we would like it to be. (Laughter) Or too metal for our sound. Now, if we are talking about our scene, there are many variations. Die Robot is very hard to put under a genre. We are different – I would say, we are in between the industrial and the synth/rock, the hard and the soft, in that wonderful in between. We called our genre Technopunk and it’s the name of our new album. And because of our diverse sound, we do fit in various categories and we get to play with all kinds of awesome bands and throw some really bad ass shows. We love that shit for sure.

On the topic of PIGFest, Die Robot was part of the 2.0 lineup and is now returning for 3.0. Tell us about your involvement in this festival and how it came about? Is there ever a concern as to how a regional-centric festival might affect the audience’s perceptions or reactions? 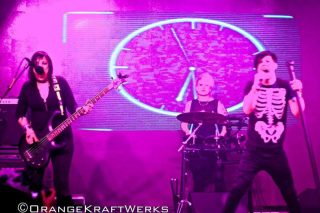 Saint: No concerns – these are our people. It’s such an honor to play PIGFest, and two years in a row. The environment is almost like a big family; that’s how I feel about it, at least. These bands are our best friends. My involvement came about thanks to Eric Powell (16volt, H3llb3nt, Black December) and Derek Moore (Shadowplay, Pandemonia). Last year, I did the press for it – this was very impromptu – and I also helped them planned the festival and promote it. This year, we are doing it with a lot more planning, and the boys decided to expand the festival to other Pacific Northwest cities; last year, all bands were Portland bands. This year’s PIGFest will be bigger and even better!

You actually design and create some of the band’s gear with Retro Mechanical Labs. What sort of challenges have you faced in designing new tools and sounds that fulfill Die Robot’s creative vision? In what ways do they accomplish this that the more commercially available tools do not? 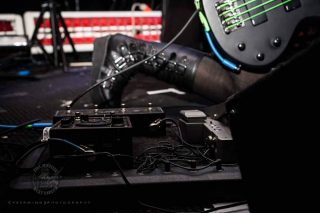 Saint: When we created the splitter pedal, it was a game changer. It was designed by John Case and Vince; I wasn’t working there yet, but I had the idea. I needed my bass to sound like a bass and a guitar at the same time without using a looper pedal. There aren’t really many splitter pedals commercially made, even though we, Retro Mechanical Labs, are producing them now to the public and anyone can buy one. I could use up to four amps at a time, though normally, I only use three (bass, guitar, and synth). You can also record two different amps at the same time, send a dry unamped signal to the mixing board, use additional amps for larger choruses, mute tracks back to verse, enhance your configurations, and so much more. It’s an amazing utility box.

There has been ongoing discussion about the role of women in this scene. There are numerous female artists that are fucking excellent like KANGA, Android Lust, Pharmakon, Donna Lynch from Ego Likeness, Erica Dunham of Unter Null and Stray, Klaryssa Korolenkov of Chamber of Echoes, just to name a few… hell, Cosey Fanni Tutti of Throbbing Gristle and Chris & Cosey. And yet, there does seem to still be this stigma of women as an adornment; so much so that a few years ago, there was the ‘We Deserve Better’ argument against Combichrist and Nachtmahr. What are your thoughts on the status of women in the industrial and electro music scene today? 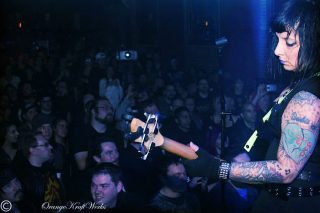 Saint: I actually played live bass for Unter Null last year at Das Bunker’s anniversary show. I love Erica so much; she is one of my favorite humans. And hell yeah, those artists you mentioned are fucking excellent! This is one of those questions… I mean, I think the problem with women on anything has been an issue since the beginning of time. There are assholes in all the scenes. I think our status nowadays is a lot better – not perfect, but seeing more and more bands with diversity is a sign that we are advancing as a society and not letting this bullshit get in the way of creating art. Who cares if you are girl, boy, both, purple, blue etc.?

What’s next for Die Robot?

Saint: Our new album, Technopunk is ready and we will release it first on USB Key during our tour, and it will also include some of the stems to the tracks so anyone can remix our songs. Later, with all the remixes, we will choose our favorites and release a new album of remixes. By PIGFest 3.0, the night we’ll play, August 10, it will be available digitally everywhere and on CD and vinyl as well. We’ll be going on tour with our friends ManifestiV and Striplicker. This is our first real tour; we’ve done mini-tours and we of course played in other cities here in Oregon and Washington, but this is our first time in California, for example. 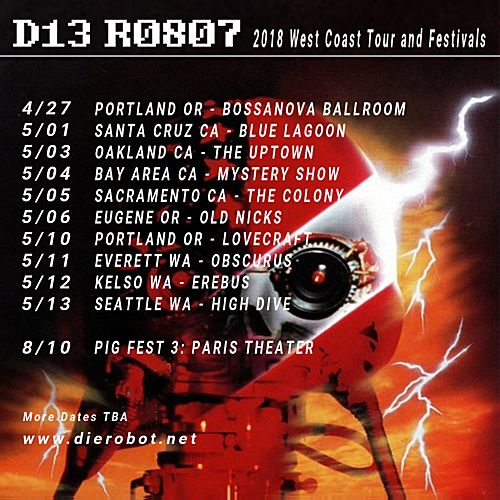 We have another big show coming up, but we can’t talk about that one yet so I will let you know. Also in the plans right now is just to do some shows in L.A. before the end of the year.