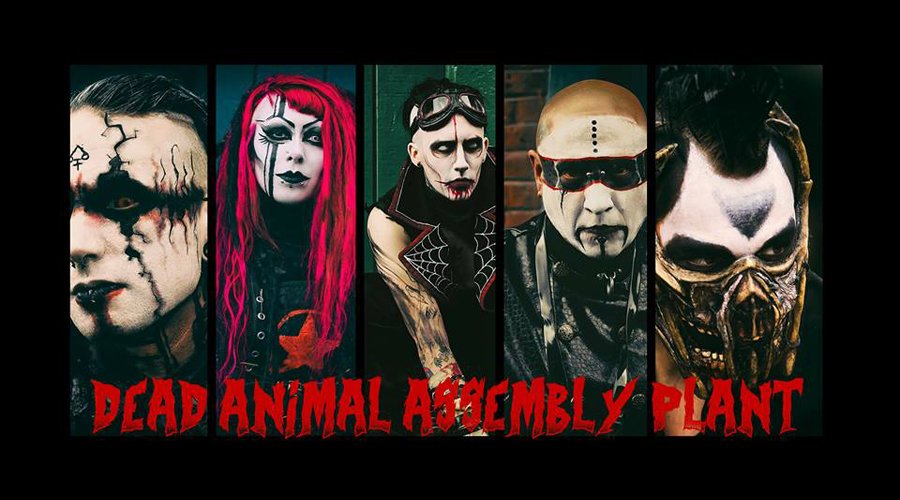 An InterView with Rebecca Wager of Dead Animal Assembly Plant 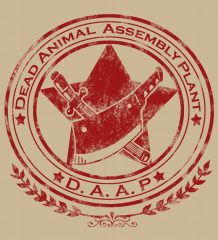 One of the bands being showcased at this year’s PIGFest 3.0, Dead Animal Assembly Plant stands as one of the Pacific Northwest gothic and industrial scene’s most effectively enigmatic entities. Founded in 2007 as a remnant of the Sweet Meats Slaughterhouse, an abandoned facility wherein the lost souls of the murderous butcher’s victims haunt the hallways, DAAP began as the solo project of Zach Wager (of HexRx) before growing into a fully-fledged band. Presented as the musical equivalent of a slasher horror flick with a decidedly grotesque comic book mentality, the band has been a theatrical showcase for the Portland and surrounding music scene, demanding to be seen and heard on a wider scale. On behalf of ReGen Magazine, Dawn Woodkill speaks with Rebecca Wager about her progression from dancer to becoming the band’s kickass guitarist.

Rebecca, the first time I saw you in Dead Animal Assembly Plant in 2013, you were wearing a pig mask and dancing, upping the horror visuals for the band. Since that time, you have evolved to bass and guitar for the band. Tell us about how this all unfolded and evolved? 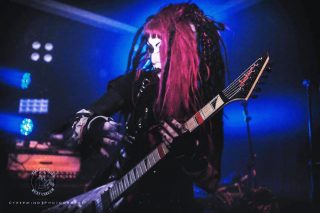 Wager: My role in DAAP has definitely evolved over the years. Even before I would do the creepy Butcherette dancing, I was working in the background doing artwork for the band, creating the logo and various other illustrations, and would do some of the makeup and costuming. Zach’s direction for the band has always been heavily visual and theatrical. At one point, he decided to incorporate creepy dancers, but had a hard time finding people who wanted to help out. So, I said, ‘fuck it.’ I’m not much of a dancer and I have terrible stage fright, but I have a lot of love for theatrics myself and believed in what DAAP was doing. The dancers stuck for a while, but then there came a time when some of the actual members had to leave or step down from the band. I have always had a passion for music and had been playing bass and guitar since I was 13- or 14-years-old. So again, I stepped up to help – from bass, to now guitar and I’m very grateful to the guys for their trust in me and helping me live out my dream.

You are one of the kickass female artists in the Pacific Northwest industrial scene and your hard work has certainly manifested itself. Do you feel like women have different or increased challenges than men do in this industry or in this genre?

Wager: I believe women in the music industry in general still get a lot of shit, in all genres – being held to ridiculous standards, their abilities underestimated, for being too ‘sexy’ or not ‘sexy’ enough. There is still a lot of pressure on women for sure.

How did your look/makeup evolve over the years? Do you do your own makeup?

Wager: I do my own makeup, costuming, hair, etc. I’m an artist of many trades so I like to change things up every now and again and improve and better my work. Creating, building, and evolving a character is a lot of fun.

You are also an incredibly talented artist. Are you still drawing? Tell us about your work and where to find it online? 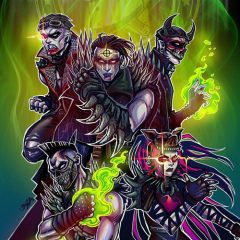 Wager: Thank you! I am still drawing. It’s my other passion next to music. I’ve gotten terrible at posting new stuff though. I still do commission work here and there and have been mostly working on artwork for the band. The biggest project I’ve been working on is the DAAP comic book, which I will hopefully be releasing sometime this year (fingers crossed). I have a Facebook art page called Buzz-ARt, but I have a hard time keeping it updated. So, I post my work mainly to my personal Facebook page, as well as my Instagram @extraterrestrial_corpse.

Wager: Yes, we did play last year! It was a lot of fun and I’m glad we have the chance to play again. It’s like a family reunion being able to share the stage with friends, seeing them work their magic, and do what they do best – so much talent packed in just three nights. We are excited to return. As for DAAP, we shall do what we always strive to do for every show we play – give it our all, give everyone a show, and fucking have fun!

Dead Animal Assembly Plant is touring this summer and into the fall of 2018. Tell us about that? 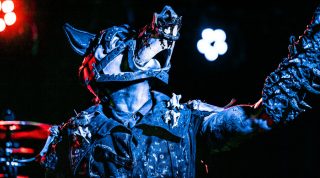 Wager: Our Hellfire 2018 tour kicks off from September 15 in Post Falls, Idaho, and wraps up on September 29 in Reno, Nevada. Along the way, we will be making stops in Utah, Arizona, New Mexico, Texas, and California. We are so stoked to hit the road and to revisit places we’ve played before, as well as new places. Our California stop you can catch us at Wasteland Weekend, September 28, which is such an amazing opportunity!

You guys have released a couple of stellar music videos. Any plans to make another one soon?

Wager: Both videos, ‘Rise with Me’ and ‘God’s Gonna Cut You Down,’ we are very fortunate to have had the incredibly talented director Karl Whinnery of HotKarlProductions to film, and he was able to successfully bring out and capture the atmosphere and vision we all had. We have many plans for videos; lots of ideas we have been throwing around, so hopefully, we can make another happen sometime soon. It’s all about finding the time to do so at the moment.