Two electronic adventurers join forces with a new project bursting with art and strategy, waging a musical guerrilla war against the status quo.

With Snog and Black Lung, David Thrussell has demonstrated a propensity for experimentation and irreverence toward a status quo that is steadily suffocating on its own shortcomings, suffering from the materialism and corporatism that has paradoxically diminished the quality of life it purports to enhance. With Crisis Actor, Thrussell teams up with fellow musical adventurer Tony D’Oporto, whose work in Gnomes of Kush and his collaborations with Dead Voices on Air’s Mark Spybey are of equal note for their breaking down the barriers of sound and music. First releasing the energetic dance floor track “Superstar” in late 2016, and signing to post-industrial label Ant-Zen for the Electronic Eye single and an upcoming full-length album, titled Slave New World, the pair showcase a no-holds-barred, take-no-prisoners attitude toward electronic music full of harsh beats and even harsher lyrics. The Electronic Eye single stands as a marvelous first taste of the pair’s pulsating and shrill electronic assault, augmented with doses of IDM and drum & bass provided by remixers such as Displacer, Assemblage 23, and Nick Woolfson. As to be expected from their extensive back catalog, the music of Crisis Actor is every bit as aggressive as one would expect, valuing art and strategy in a manner that will surely remind many of the early outings of Front 242, but with a decidedly modern and minimalist flair that is sure to send many running to the dance floor. Thrussell and D’Oporto took the time to speak with ReGen about their new musical association, giving audiences an insight into what makes them tick, and just what we can expect from Crisis Actor in the foreseeable future.

Let’s begin with the obvious – how did Crisis Actor come together, both personally and creatively? 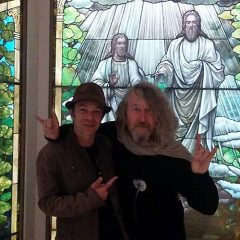 D’Oporto: David and I began working together about 10 years ago. I was working with Cyrusrex and we brought Snog to Los Angeles to do an exclusive show for us. Our relationship began from there and continued to evolve. Since then, I have had a hand in most Snog shows in the USA and a couple of remixes. I approached David about a year ago with the idea of doing a project that was a bit more dance related and directly political / conspiracy based. We started with one song, ‘Superstar,’ and put it up on Bandcamp as a free download. We felt really good about the outcome of the song and people loved it. From there it became another single, then a full-length album!

Thrussell: What he said…

With the Electronic Eye single, in what ways were your expectations for this collaboration met or exceeded? 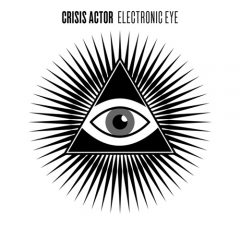 Thrussell: With all humility, I think the single is very strong – a straightforward, grumbling, growling manifesto. I take your point; it is essentially exactly what we set out to do – a dance floor screed about the alchemical potential nested in universal surveillance. Just listen to the song… it speaks for itself.

What are your current plans to take it to the next level for your next release (which I understand is a full-length album in April)?

Thrussell: Well, we’ve just finished an album called Slave New World. It’s a unified statement of conspiracy as folklore and precognition – a breathy political scream from the lower regions of the information substrata. It’s a diverse, inclusive, but concise statement of seismic discontent.

What did you find to be the major challenges or conflicts in merging your different approaches and individual styles?

D’Oporto: I think the most conflicting thing for both of us is that we are used to being in charge of everything. We both have very strong ideas on how we want things to be done and presented. But, we managed to work it out. 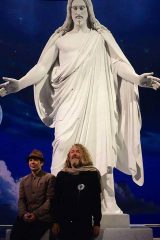 Thrussell: Yeah, he’s right. We are both a little headstrong and had to work hard on conflict resolution. Ultimately, we hired renowned therapist and writer Dr. Alvin Lucia to shepherd us through the recording process. Substance abuse, accumulated decades of emotional baggage, and a few fistfights over lyrical content had brought the recording and songwriting progress to a halt. At one point, Stefan, at our label Ant-Zen, was pretty concerned about the conflict arc and his large faltering investment, and flew to Santa Barbara to get Alvin involved and move things forward. Alvin enacted basic strategies to resolve lyrical impasses and synth patch disputes. For example, one late night in the studio, all four of us stood naked, throwing dice feverishly to see if a third verse should be ditched or repeated. I can’t really go in to more detail, I’m sorry. It’s still pretty raw.

Both of you have in your other projects/bands explored a varied range of sounds and themes. What do you feel Crisis Actor succeeds in or achieves that you may not have been able to reach in these other projects?

The quote is pretty self explanatory, and certainly is in line with the themes of anti-consumerism and individuality that has driven Snog’s music especially. What are your thoughts on the audience’s interpretations to your observations – is it ever a concern that the message you’re attempting to convey is being misunderstood or even received at all?

Thrussell: While being misunderstood may precipitate frustration, it is also the very best battlefield or guerrilla strategy. Art is best conceived as a handcrafted Trojan Horse. Its payload need not explode today or next week or next year. Art lays in wait through the years for the right set of ears.

Not to make the assumption that you’re trying to preach or proselytize… or are you?

Thrussell: Cake always tastes best when kept and simultaneously eaten. We are the neon preacher who retires his robe when the bright lights dim, the zealot who seeks comfort in suburbia, the angel that dirties his boots in the realm of the fallen. One of the few advantages of art is that it can mean many different things to many different people – a poison with a plethora of flavors.

Switching gears, as electronic musicians, what are your thoughts on how electronic music in all of its forms has advanced with the technology that is used to create it… or do you feel that it has?

Thrussell: I’m not concerned with technology in and of itself. It is a toolset and is as interesting or uninteresting as any another toolset.

What would you like to see as the next developmental stage for both technology and music as a whole?

D’Oporto: I do not really have an opinion on it. I’ll make music with one synth or 10, a computer or not. I feel people get caught up in these things and lose focus of just making nice music. 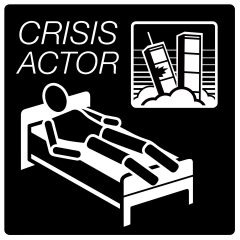 Thrussell: Yeah, I agree with Tone. Tools are great. But they are just tools. Ideas and inspiration are more important in the end. Our very first records were made with technology that would appear almost Stone Age today. But they still hold up quite well because they have undergraduate passion, a withered wit, and stumbling ideas.

If there were a figure from history – political, scientific, entertainer, etc. – who you would wish to participate in Crisis Actor in some capacity, who would it be and what would you think that this person would bring to the musical table?

Thrussell: Lee Harvey Oswald. I’m sure he would have some interesting stories to tell.

D’Oporto: Emma Goldman. She sounds like she would be fun to have in the band!

This is what is affectionately referred to as ‘The ReGen Question’ (and yes, it’s an impossible scenario, but it’s supposed to be fun). You’re standing at the edge of the world; the sun is a red giant that is about to go nova and end all existence, matter, reality as you have known it. What are your final thoughts?