AM Tierpark InterView: Love and Melancholy0

A sucker for melancholy and lover of a good melody, Claus Larsen opens up with ReGen on the foundations of AM Tierpark to forge a poignant and emotive synthpop style.

An InterView with Claus Larsen of AM Tierpark

Claus Larsen is a name that needs no introduction in the electro/industrial scene – as the mastermind behind Leæther Strip and Klutæ, he has been one of underground music’s most consistent and prolific artists, forging a seductively acerbic style of rhythmic industrial and EBM that has made his music a staple of many a DJ’s set list since the early ’90s. With AM Tierpark, Larsen has teamed up with fellow Danish electro musician John R. Mirland of Holm/Mirland, expressing a different side to his musical personality that focuses on a less aggressive, more melodic sensibility inspired by the synthpop sounds of the ’80s. Beginning from a stroll through Berlin’s Tierpark on a sunny spring day before the two bands were to share the stage, the foundations for AM Tierpark were laid in just a few moments, with Larsen and Mirland expressing a desire to create an underproduced, purely emotive and crisp electro/synthpop style. Signing with Jim Semonik’s Distortion Productions, the band’s Uncaged debut presents these poignant and minimalist expressions in fine form, with the first single and music video “A Step Too Far” being a more than effective primer. Larsen speaks with ReGen now about the band’s foundations, touching on the musicians’ roles in AM Tierpark, his own creative process and the inspirations behind it, along with his loving partnership with husband Kurt Grünewald Hansen and a little hint about great new things to come from AM Tierpark.

It’s stated that the band began on a spring day in April when the two of you were discussing music. What are the particulars of that discussion that helped formed the foundation of AM Tierpark? 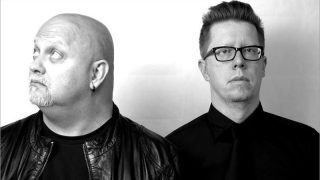 Larsen: We were playing a gig in Berlin with John’s other EBM band Holm/Mirland, and while Kurt was taking a nap, we walked across the road to the old east Berlin Zoo. It’s also a big lovely park with a lot of history. We’ve known each other for a few years but were not really close friends until now, so we were just chatting away about what sorts of music we like and what we missed in the new music that’s released today; we both agreed that many of the new music tends to focus more on production than on the actual songwriting and we both share the love of the ’80s style underproduced and minimal production styles – the sound in genres like synthpop and Italo-beat. So I told John why not try to do some cover versions of a few ’80s hits and see if we were a match. We covered Billy Idol’s ‘Flesh for Fantasy’ and Pet Shop Boys’ ‘I Get Excited.’ We were so happy with the results and how easy it was to work together that we decided for AM Tierpark to go all in. So this is a real band and not just a side project. We both had dreamt of doing this kind of music for many years, so we’re having lots of fun with it and we’re already deep into the next album.

While Leæther Strip has never been completely devoid of melody, it’s certainly more aggressive in nature; what was it like for you to go for the lighter tonality of AM Tierpark?

Larsen: Yes, I also make many melodic songs as Leæther Strip, but the way I write my songs are much more introverted and demands a lot more of the listener. Not that I’m not pulling on my deepest thoughts in the AM Tierpark lyrics, but they are just a lot more spontaneous and because of John’s minimalistic way of doing the AT tracks, it leaves the songs very open for me to jump in with my voice and words.

Were there any kind of vocal exercises that you employed to improve your singing for one project over the other?

Larsen: No, I just sing my heart out. Sure, it’s not perfect, but I mean every word that I sing and I record my vocal parts live to get a more real expression. It reminds me of my days in the local boys choir back in school and I get to sing harmonies again. We want AM Tierpark songs to sound fresh and if it sounds like something that was done in the ’80s, our goal has been reached. We’re not trying to invent a new style; we’re being very nostalgic and this is all out of love of good songwriting and a melody/lyric that can move people.

Regarding the lyrical content, what would you say are the primary themes you focus on – love of a good melody, but what particular thoughts and emotions are you conveying with those melodies, and in what ways would you say they contrast with that of your other projects?

Larsen: I don’t really think in themes. I get a demo from John and it doesn’t take long for me to catch a melody and then I just go with the first topic that comes to mind. It can be about a past or current experience or happening, or even dreams. After the album was recorded, it ended up having a very melancholic flow and for us, that fits with what we intended when we started out. We’re suckers for melancholy.

What is the working dynamic between you and John Mirland – what would you say are your respective roles in AM Tierpark?

Larsen: Yes, we have really clear roles, and that was carved in stone from the very start. John is 100% music and I’m 100% vocal/lyrics. Sure, if there is something we don’t like, we both got veto rights. If we don’t agree on something, then it’s a no-go. But it usually only takes a tiny little correction to fix it when that happens. We both need to enjoy this to the max, because this is a tribute to what we love in music.

You signed with US label Distortion Productions; what was it about this particular label that appealed to you for AM Tierpark’s album release? 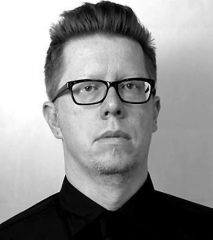 Larsen: I know and trust the boys behind the label 100%, and we wanted to sign with a label who loved what we were doing and why we are doing it. Distortion Productions is a label with a family feel and it was the first to say ‘Yes,’ and we get 100% artistic freedom. We got a few ‘No thanks’ responses from a few European labels; that’s their loss because I really feel that there are many people out there, including us, who miss that focus on the honest songwriting straight from the heart. We signed with friends, and I hope this partnership will be great for is both. It’s all up the listeners; if they want to go big with their support, we’re so there and I know the label is too. This scene sure needs some success stories so I hope we can be one of them. We’re not hiding behind a ton of layers and effects, and judging by the amount of kind words, I think we’re on the way to bigger things with AM Tierpark, though it’s hard for any band these days. We are also now in early stages to prepare to take AM Tierpark to the stage.

You’ve been making music since you were a teenager; in all that time, what would you say are the most important lessons you’ve learned – not just in technical terms, but personally as well – and how do you think they’ve shaped your approach to making music now versus when you started? 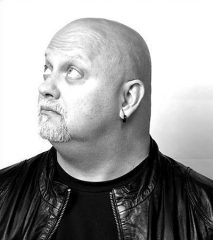 Larsen: Yeah, since I was 14. I bought a Moog Prodigy and two weeks later wrote my first song, titled ‘Dreaming.’ It was one of the most life altering happenings in my life, from being a lonely and sad spectator to others lives around me, because I was ‘different.’ Suddenly, my life had a purpose and I had an outlet for all my hope, dreams, and a place to put my dark thoughts and pain. I have no doubt that music has saved my life many times. I need to write songs to stay sane and to be able to be a good husband to Kurt and a friend to my friends. I still learn with every song I’m a part of and I’m still hungry for more. Yes, I have my scares from being in this business, as does any artist. But I still try to see the good in people and I always give them a chance to show me that they are for real and have their hearts in the right place. And finding a musical soulmate like John is a dream come true for me. I didn’t choose to not be in band – I started Leæther Strip out of frustration that I couldn’t find any musician with the same passion and drive I had. And on top of that, John and his wife Lene are some of our best friends now too. I hope I will never lose that drive to create good songs.

What are your thoughts on the evolution of music – both as an art form and in terms of the industry – and where do you feel it has yet to progress? 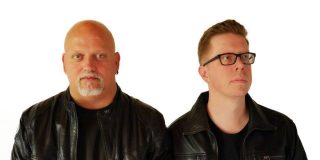 Larsen: It’s both depressing and exciting times. We, Kurt and I, really struggle financially because music is our only income. We work hard to make ends meet, but so far, we’re staying afloat. The gigs are what is paying the bills, but it’s getting harder to get them for all bands too these days. But having been in the business since the ’80s, I know it’s all ups and downs and my hope is that things will change as they have done in the past. There are a lot of passionate label people, promoters, and musicians out there who work so hard to keep this scene alive, and if people want a scene, they’ve got to show their support. Because who are we without music? Music has sadly become chewing gum to many people. I miss the days when people would sit down and actually listen to a new album in full that they just bought. I keep hoping.

Outside of music, where do you find the most inspiration – not just creatively, but in terms of day-to-day life? What keeps you going the most?

Larsen: Taking long walks with Kurt and the dogs are very inspiring for me. Kurt taught me to focus on the good things in life and I dump all the crap into my music or my drawings. He’s my muse, and a bigger part of Leæther Strip than most people know. We also have so many great friends around the world, so my favorite times are when we’re out playing concerts and we get to meet the people who actually listen to what I do and care about our wellbeing; especially after Kurt got sick, it’s been very important for us both to get out and play to get our minds off all the doctors and needles. If I’m down, all it takes is for me to go down and start making sounds on the synths, and before I know it, a song is starting to form out of the blue. This is pure magic for me. Half the time, I ask myself, ‘Where the hell did that came from?’