The maestros of machine rock return from a thankfully not-quite-permanent hiatus, as Eric Powell and Erik Gustafson initiate the third wave of 16volt with a new album, The Negative Space, in the works!

An InterView with Eric Powell & Erik Gustafson of 16volt 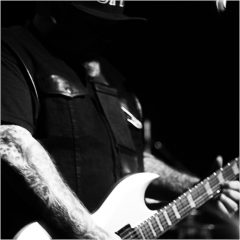 When Eric Powell announced the demise of 16volt in mid-2014, the world of industrial/rock felt a huge void – as one of the key bands in the genre, helping to spawn the style many have come to know and love as coldwave, 16volt’s influence and significance simply can’t be understated. Having survived numerous lineup changes, record label politics, flirtations with a wider audience with numerous compilation appearances and appearing in the PlayStation 2 game Primal, 16volt has been characterized by its seamless merging of mechanical rhythms, emotive melody, and unrelenting aggression, propelled by high energy live performances that have earned the band many accolades even in the mainstream. The band went on a hiatus after the 1998 release of SuperCoolNothing, though amid touring with KMFDM, the Primal appearance, and the release of Demography and a Best Of collection, 16volt was hardly silent; however, it was the 2007 album FullBlackHabit that marked the band’s return to active production, churning out a second wave of hard hitting mechanized rock assaults, with 2011’s Beating Dead Horses being the latest outing. Now, with 16volt revived and with a new album under way, Powell and new member Erik Gustafson speak with ReGen about 16volt’s not-quite-permanent hiatus and subsequent resurrection, touching on the pair’s short-lived sojourn with the now defunct Black December, the band’s upcoming third appearance at the Chicago ColdWaves Festival, the new album, titled The Negative Space, and just what audiences can expect from a leaner, meaner 16volt!

While 16volt was declared disbanded almost two years ago, the band has since reformed… what prompted 16volt’s resurrection this time around?

Powell: I think I just found myself realizing again that 16volt is who I am. Sometimes, we just need to breathe and I just needed a minute to let go and do something different. At the end of that breath, I think it allowed 16volt to come into a new era and we can all feel that.

Gustafson: I was first brought into the fold with Black December. I’ve always been a 16volt fan, so it was pretty cool to hop into this totally new thing, yet with Eric Powell. That totally new thing also meant no expectations, so it’s not like I ran the risk of totally train-wrecking ‘The Cut Collector’ or something. (Laughter) But yeah, back to 16volt, at least for me, meant actually learning classic songs I was familiar with, and then also some of the newer stuff (the Beating Dead Horses album) I was not as well versed with, so diving into that was fun.

What can you tell us about the band lineup and how it came together? 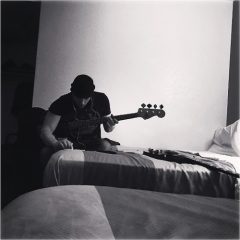 Powell: Well, Erik Gustafson was with us in Black December, the band I did during my reprise. He’s just such a great player and amazing person. It was a total given that he would be the first person I asked to come into the fold.

How did Steve Hickey come to be the bass player?

Powell: I’ve known Steve for years and he’s toured with us several times as a stage tech. With a void existing in the bass position, he was an obvious choice. He’s an incredible musician and, again, an amazing person – super giving and ready to go to work and just a great person to be on the road with. He already knew the songs and he’s a great vocalist, so it all just made sense.

Does this mean now that Black December is no longer active, or will that band’s lineup continue as a separate entity?

Powell: As far as I am concerned, that project is done. I have no desire to continue with it.

What do you feel you learned – either technically, musically, or personally – from the experience with Black December, and how do you feel it’s strengthening your resolve for the 16volt resurrection? 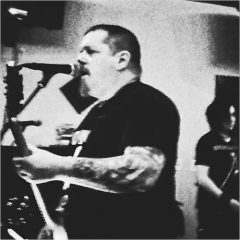 Powell: I hesitate to call it a resurrection because it wasn’t dead. But to answer the core of what you’re asking, with Black December, we were just free to do whatever we wanted. There was no history, no baggage, and no pre-conceived notion; so we just did what we wanted. I think ultimately what happened was what we wanted is what we could have done anyway. I think it made me a better musician though because I was exploring so many different things I might have avoided with 16volt and will now not avoid. The new 16volt record is probably our most diverse and we are really excited to show all these sides of our sound.

Gustafson: I personally was happy to have had the Black December experience first. It was a primer for me for the world of 16volt and what to expect. Plus, it was a hell of a lot of fun to play those shows first shows with KMFDM. I was also at the time a tech/stage manager for CHANT for part of that tour, which was insane – too many hats to wear. (Laughter)

Now that 16volt is back and performing at Terminus and at ColdWaves, what do you foresee in 16volt’s future as a live unit? In other words, what do you feel you’ve actively changed from the way you’ve performed live in the past? 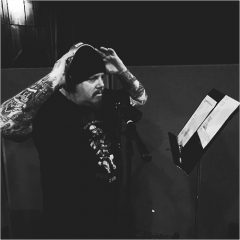 Powell: You know for me, it’s always been about the music, I am not super into theatrics – we don’t do fake blood, we don’t do makeup; I am not trying to portray some kind of fictional character in our shows. So I don’t think anyone is going to see a big change there. We are pretty simple in that way. We come out, we give you our sweat, hard work, and passion for our music. And we’re going to go at it no matter what. We want to rock! And we want the audience to feel that and participate in that.

Having performed at ColdWaves I and II, and now returning for V, is there anything you’d like to say regarding your association with this prestigious and important event? Besides celebrating the life of Jamie Duffy, what do you feel has best distinguished ColdWaves from other similar festivals that you’ve participated in?

Powell: Well, I think hands down, it’s about location. Chicago is the mother of this music. So it’s an obvious place for us to all go home to and get together and kill it for the fans. It’s a great city, the fans are great, and it’s just natural to do it there; especially at Metro. The history is so deep. It truly feels special, and important, and humbling, and an honor to be a part of.

Gustafson: Personally, I’m super stoked to attend, and also, the bonus is I get to play ColdWaves! I’ve always been a fan of Acumen Nation/DJ? Acucrack, so this event is important indeed.

You recently held a crowdfunding campaign, and it’s been five years since Beating Dead Horses… will we see a new release soon? 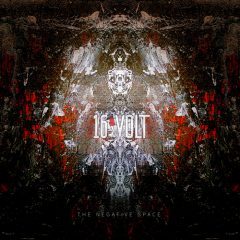 Powell: Absolutely! We are moments away from the new album being completed. The crowdfunding was great for us. It helped us be able to do this record and do it right. We worked with producer Marc Jordan (Velvet Revolver, The Cult, Die Antwoord) throughout the whole of the album and it really makes a difference. I think the end result of the new album, The Negative Space is a very modern take on our sound that we couldn’t have done with previous circumstances.

So besides the upcoming festival appearances, what’s next for 16volt?

Powell: We are just booking a bunch of shows all over and getting out and playing!