16volt InterView: Defiant to the End0

Returning to its machine/rock roots for the Dead On Arrivals EP, 16volt injects some fresh and virulent oil into its sound, full of anger and defiance as only this band can deliver.

An InterView with Eric Powell and Steve Hickey of 16volt

Never a band to fall victim to predictability or staleness, 16volt continues to be one of the most consistent and prolific entities in modern music. Headed by the maestro of machine/rock Eric Powell, the band has undergone many transformations, with 2016’s The Negative Space signaling 16volt’s return from a period of inactivity with an audacious blend of industrial and alternative rock tones that for some strayed too far from the mechanized rage and emotive electronics of the past. Now with Dead On Arrivals, Powell and band mate Steve Hickey have crafted six tracks that injects some freshly virulent oil into the machine/rock engine. Having recently performed at Stimulate NYC and scheduled to appear at ColdWaves L.A., Powell and Hickey took the time to speak with ReGen about 16volt’s returning to its roots with Dead On Arrivals, speaking about the production and songwriting process behind the EP’s development, and some hints about what 2018 holds for 16volt.

After working with another producer on the Black December album and The Negative Space, Dead On Arrivals marks your return to the producer’s chair, as well as handling mixing on your own. What sorts of methods or techniques did you learn or adapt to your production style on this latest release since Beating Dead Horses? 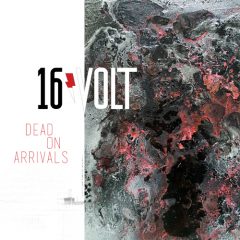 Powell: For me personally, I think it’s more of an intellectual or ‘spiritual alignment’ with the process. I look back on all the varied ways we’ve made our records and they are all different and unique. The process becomes part of the sound, part of the vibe of the album. The previous experiences have just become another part of the larger puzzle. I want risk. I want to break patterns. I like not taking the safe route. At the end of the day, there is beauty and specialness in imperfection. That happens organically and I think at this point I celebrate and hope for those things.

Hickey: We actually even kept a few of the original demo takes that captured a certain moment that we didn’t want to overthink while re-tracking.

Powell: (Laughs) I could have saved a few hours of our lives just being happy with those originals. I went back and tried to re-track those in a more formal way and it just didn’t have the same feeling. So we hit the virtual ‘restore’ button and here we are; celebrating the rawness of it.

When we last spoke, you’d mentioned that you’d done FullBlackHabit mostly in your home studio and that you would likely go back to that approach. Now, having done that, what would you say you missed most about that process?

Powell: Well, we definitely did do that. The new EP is entirely recorded at home; no formal studios at all. In some ways, I think it lets things happen more naturally. There isn’t a pressure, no watching of the clock. We work on stuff when we feel like it. I also like the privacy of it, the creation of songs without influence. It allows me to go into more wormholes and explore.

In what ways do you feel that helped you to achieve a pure 16volt sound for Dead On Arrivals? 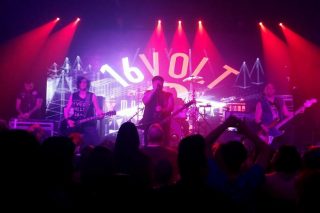 Powell: That’s a good question. We were very deliberate in where we wanted to go. The going back to the ‘roots’ is entirely intentional. It’s not a forced thing though. It was mostly more of a feeling we wanted to capture. What makes a song sound ’16volt?’ Is it the instruments used? The mics? The amps? Or is it the way it’s all put together, the spirit and emotion of it? I think it’s all those things together. So we just let all that come together in a pretty natural way and didn’t shy away from it or try and overachieve it. At the end of the day, you can’t run away from yourself.

Steve Hickey, who has had a long association with the band, seems to have played a more significant role on this record (co-producer and performing multiple instruments). Can you tell us more about your working partnership, how the two of you bridge your individual styles together, both instrumentally and in terms of production, to create this new 16volt? Is Steve involved in the songwriting as well?

Powell: I’ll let Steve speak on that, but I will say that it all just worked. He’s an incredible musician and the thing was just easy to do with him. It just clicked. His album credits aren’t charity. He earned them. 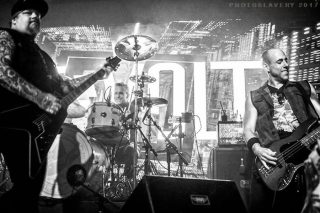 Hickey: I’ve been listening to 16volt since I was about 15. 16volt has always been an influence in other projects I’ve worked on, so it was natural to work on song starters I thought would spark ideas for Eric to run with. I leaned towards a more thrash metal style for this one and co-writing with Eric, the songs came together almost effortlessly and kept true to the 16volt sound. At one point, we were shocked at how fast and fluid everything came together. Being a part of 16volt and making this EP is a complete honor.

You’d spoken before about the geographic challenge when it came to playing live with people like Erik Gustafson; Gustafson also appears on the album providing some synths/samples. Obviously, the geography is less of a factor in the studio thanks to home recording and the internet, but with Gustafson and Eric Bergen credited, what was the process like with their contributions? In other words, how much did they do in the studio with you, how much was via file-sharing, and in what ways do you feel the music or the sound of the album changed with their additions? 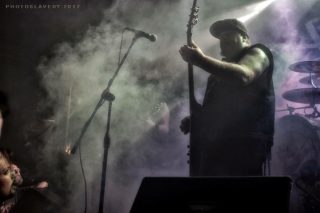 Powell: Yeah, file-sharing these days is fairly seamless. I think doing things with Erik remotely on the album allowed him that same exploration time I was talking about earlier. Really, it was just sending ideas back and forth and seeing what kind of extra layer he could add to things. I love to have that extra perspective on things so it’s not just all one-sided. With Eric Bergen, we recorded cymbals and hi-hats in my home studio; it took two days I think… pretty quick deal and we just hung out and had fun making loud shiny metal sounds.

In the last InterView, you’d said The Negative Space was mourning and the next step in the process would be anger… Dead On Arrivals is certainly pretty angry.

Powell: It is, but it’s not just that. There are a lot of dimensions on Dead On Arrivals. It’s not like a concept collection we are making on the stages of grief. But I defiantly felt like after The Negative Space that I was really ready to do more heavy and driving stuff again.

The first lines we hear are the lyrics, ‘I was searching for some meaning in this emptiness I feel / so I sheltered in protection and disappeared from what is real.’ That’s a rather poignant line, and from what I can read in lines like that or ‘Stereo madness breeds deceit / What you knew is obsolete,’ I sense a recurring theme of defiance and reclaimed identity (not uncommon in 16volt). Am I reading too much into that?

Powell: No, not all. I think you’ve hit the nail on the head. Those are subjects I tangle with constantly. The lyrics are sometimes more of a story, but the spirit of the story is inspired by those thoughts and feelings.

What are the main lyrical themes on this EP and what can you tell us about what inspired them? 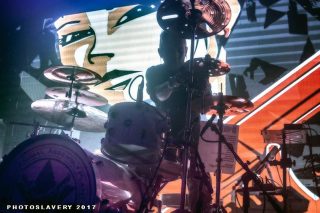 Powell: Well, I know it’s a little cliché, but I like to leave it up to listener interpretation. That’s probably not a satisfying answer, but we all experience things in life at different times. I try and add some reflection and humor in, but the songs do follow a darker theme. Towards the end of recording, I took a long break to be with my mom. She suffered from Lewy Body Dementia and it was a really rough process in the end. It makes you question a lot of things. I was with her when she passed away. It was a really hard thing to go through and both the dark and light of that can be found on the album.

In recent years, I’ve noticed a propensity for many acts to focus on shorter releases – EPs and singles – rather than full-length albums, mainly due to keeping a more constant stream of productivity as well as it being easier amid other sorts of responsibilities. This is the first time I’ve noticed a major release from 16volt that wasn’t a full-length album (correct me if I’m wrong, of course). What are your thoughts on the album format as it pertains to you and 16volt?
Will there be a new full-length album? Why was Dead On Arrivals only six tracks? 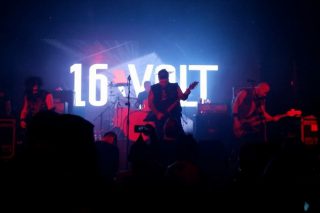 Powell: I think after the last album and how much work and money was spent doing it that we wanted to take a more practical approach and part of that was deciding to do an EP. A lot of artists are having this conversation right now – do albums matter anymore? I mean for the majority – the attention spans of fans, the time it takes to make an EP vs. an LP. We really just wanted to try it and see how it goes. The results are not in yet and I don’t know if we will really truly know them anyway. We have to keep trying different things and see what happens.

Hickey: Although I do love albums and B-sides, it’s almost that an EP is short and sweet, leaving the listener wanting more. Full albums can be exhausting to work on too, so I also think that it gives the artist time to regroup and maybe even be more productive in the long run. We are already discussing direction for the next one.

Dead On Arrivals was released on October 26, and then you performed at Stimulate NYC the following night, and you have ColdWaves L.A. coming up. Being free agents now, what else do you have in store that you can tell us about?

Powell: That’s it for 2017. We’ll have to see what opportunities come up for 2018. The last couple of years, we haven’t really toured. All we’ve done is one-off and festival shows, fly all over the place and stay in hotels. It’s actually kind of a nice change. So I am not in a rush to get on a long term tour.

Hickey: I’m down for whatever. Let’s rock.

What are some future plans that you’d like to set in motion (i.e. more live shows, tour, music video, full-length album, any other collaborations, etc.)?

Powell: We are talking about some videos, working on more shows, and getting right back into writing the next EP!

Photography by Photoslavery, courtesy of 16volt