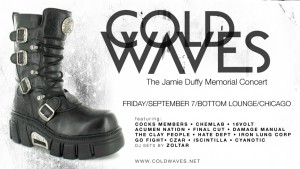 Some of Industrial Music’s finest musicians will perform as a collective at Bottom Lounge in Chicago on Friday, September 7th, 2012, to celebrate the life of Jamie Duffy, who passed away earlier this year.

TICKETS ON SALE MONDAY AT NOON AT BOTTOM LOUNGE SITE AND COLDWAVES.NET

Doors at 7pm (subject to change)

Over the past year, Chicago has started to become accustomed to hosting large scale multi-day/multi-band industrial music festivals; unfortunately this special event is a lot more somber.

On June 21st of this past year, Jamie Duffy passed away in the early morning hours, leaving behind a legacy much greater than his known contributions to the industrial and metal genres.  Even if you didn’t know Jamie Duffy, odds are that you still KNEW of Jamie Duffy and his work as he served as stage manager or as the soundman at many of your favorite Chicago venues such as the House of Blues, Cubby Bear, and Cabaret Metro amongst many others. He appeared on, mixed, produced, engineered, remixed or just plain influenced many of your favorite bands such as Chicago’s very own Ministry, Sister Machine Gun, Chris Connelly, Sister Soleil, Method Man and more.

In addition to being a sound engineer and producer, Jamie was also well known across Industrial Music’s landscape for his contributions as a member of the Coldwave/Metal hybrid band, Acumen Nation, and the Drum and Bass project, DJ? Acucrack not to mention his appearances on Pigface, Chemlab and Cyanotic albums

Jamie Duffy’s contribution to the Metal and Industrial genres crosses over from releases on major record labels such as Warner Bros. Records and RCA records, to large independents such as WaxTrax! Records, to the smaller independent labels such as Invisible, Underground Inc., CrackNation records, WTII Records, Fifth Column and Metropolis records so it is more than likely that Jamie Duffy has touched you in some way even if you didn’t realize it at first.

With all that being said Bottom Lounge, CrackNation Records, and the Duffy Foundation are pleased to bring you a special one of a kind memorial show. Paying tribute to this great man at this unique memorial show will be several of Jamie Duffy’s peers and friends with whom he produced, remixed, engineered or just plain influenced. An all-star cast including such well-known names of the industrial genre includes Paul Barker, Chris Connelly, Jared Louche, Martins Atkins, Steven Seibold, Jim Marcus, Jason Novak, Eric Powell will be performing selections of songs by their bands; Revco, Chemlab, 16volt, Acumen Nation, Damage Manual, Hate Dept. The Claypeople, Go Fight/Die Warzau and more , while finishing with an all-star jam worthy to pay their respect to this amazing man.

Proceeds from the show will go to support the Duffy Family and Foundation.