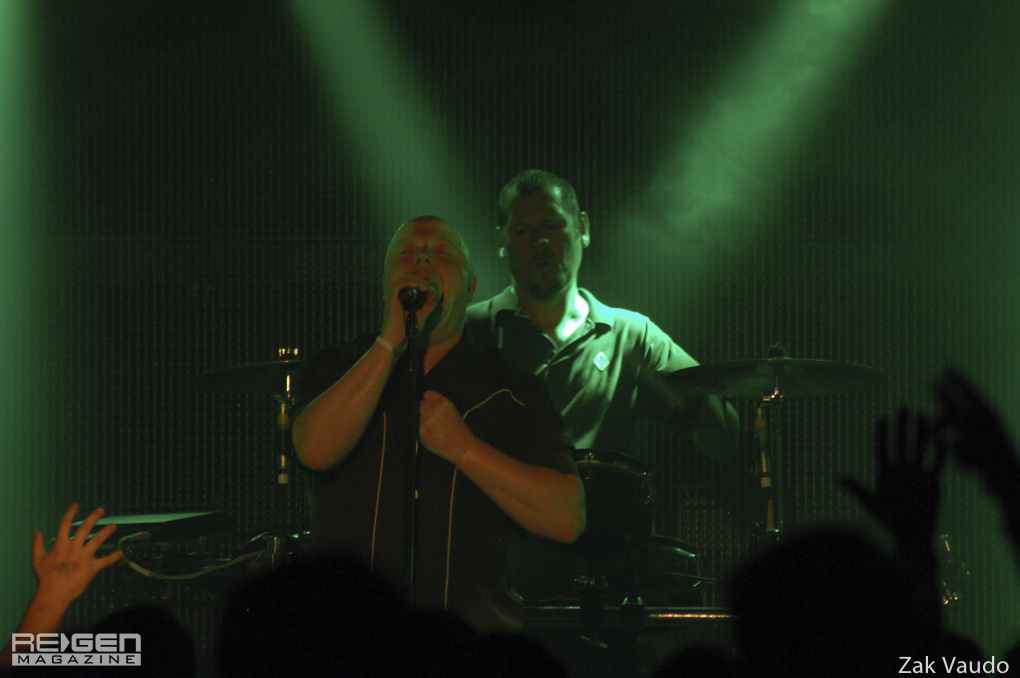 For the past 18 years, VNV Nation has engaged the world with its live performances. This year, the progenitors of futurepop and legends of electronic music completed yet another tour, supporting its most recent album, Transnational. As with the Automatic tour, the proceedings came to a close at the legendary Masquerade in Atlanta, GA, a longtime hub for the electronic/industrial genre. END_OF_DOCUMENT_TOKEN_TO_BE_REPLACED

The true ingenuity behind the return of the seminal Canadian tribal/industrial outfit iVardensphere to London is not instantly apparent. Juggernaut Service’s Nick Quarm made sure behind the scenes, however, that this wasn’t just another trivial Saturday show filled with the usual pedestrian crowd pleasers. Instead, the night’s lineup consisted of the label’s very own loud and uncompromising Tapewyrm, Cease2Xist, System: FX, and Ruinizer. This already impressive set was then extended into the early morning hours by ESA (Electronic Substance Abuse) and Mono No Aware, making for a lengthy endurance run through the genre’s most danceable, most riveting, and most abrasive soundscapes. END_OF_DOCUMENT_TOKEN_TO_BE_REPLACED

This year’s edition of the Resistanz Festival is now a thing of the past. But three days, a lineup of 20 acts, and countless Jäger bombs later, memories can indeed become a bit hazy. ReGen Magazine managed to attend the closing star-packed day of this rising British festival and report on the proceedings.
However, in order to provide the full scope of the event, and since no music festival could exist without the musicians that make the crowds gather and enjoy themselves, ReGen has decided to reach out to some of the artists that played at this year’s Resistanz, as well as witnessed it from under the stage.
If you are curious about what you missed, want to reminisce, or simply want to get a better sense of what was happening on the frontlines and behind the scenes of Resistanz, check out what the artists themselves recall from the industrial blur that was the Easter weekend, 2014. END_OF_DOCUMENT_TOKEN_TO_BE_REPLACED

The second half of the Sunday afternoon at Corporation had both the expectations and the rhythms ratcheted sky high and Belzebass kicked things off immediately after the break, providing a lengthy organic mix of high tempo hardcore and dubstep that replaced the previously cancelled God Module. END_OF_DOCUMENT_TOKEN_TO_BE_REPLACED

All of this world’s haters might hate and the fatalists might endlessly spin the tale of the industrial scene being on the brink of its extinction, but one flight across the ocean to Sheffield in the UK provides proof that this is not the case. Resistanz 2014 was in preparation before the last year’s edition even finished, which in itself is probably the best example of the commitment of its organizer to deliver a one-of-a-kind event that rivals any and all of the other better established industrial festivals. Only four years into its existence and Resistanz was again sold out, bringing together fans and bands from across the globe and for the first time, ReGen Magazine (even if only for one of the three days). We are now happy to deliver a report on how the UK’s industrial fans really celebrate Easter. END_OF_DOCUMENT_TOKEN_TO_BE_REPLACED

This August, for the sixteenth time, Infest festival will take over the University of Bradford in the UK for three days to provide its international audience with perhaps the summer season’s most varied lineup of industrial and crossover alternative styles.

END_OF_DOCUMENT_TOKEN_TO_BE_REPLACED

Celebrating its fourteenth year, Chicago-based label WTII continues the release of industrial music and its subgenres that made the label from which it was spawned, WaxTrax!, legendary.