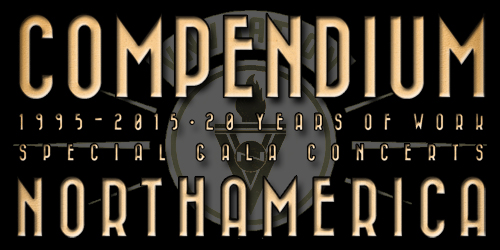 Compendium wasn’t just another chance to see VNV Nation; it was a celebration of music and joy. No opener… just VNV Nation for three solid hours playing whatever the band wanted. 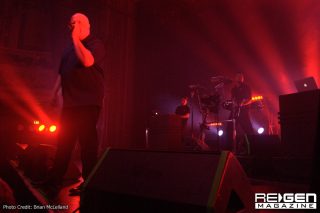 VNV Nation concerts are passionate affairs, high on energy and low on stress. Ronan Harris demands attention, participation, and, perhaps most of all, shamelessness. My first time seeing VNV Nation, I intended to stand and watch the show with my arms crossed as my capacity for dancing was absent from my genetics, but Harris wasn’t having any of it. I was pointed out, shouted at, not in cruel ways, but enough to remind me that what I looked like while dancing really meant nothing. All that mattered was that I joined in and enjoyed myself. 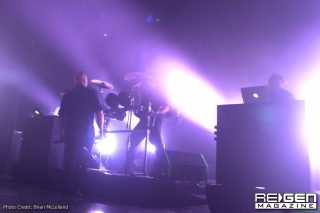 The San Francisco Compendium show at The Regency was more of that familiar VNV Nation energy offered on tap. People who looked sullen or were just recording the show through their phones were singled out and made to participate, just as I had been years before. A young girl in attendance with her parents was roused from the stupor of awkwardness that I once felt. No one in the venue was left unaffected by the bombastic explosion of light, noise, and color that VNV brought to the audience that night. 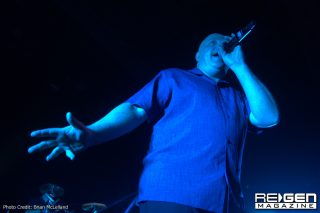 The range of tracks played included much of the catalog, from “Frika” to “Illusion” to “Procession” to “Dark Angel,” each song delivered with intensity and care, despite some technical difficulties. I had worried for the stamina of the audience, and a handful did leave prior to the first encore, but the venue remained full and energetic despite exhaustion. Each time it seemed as though no one could go on any further or dance another moment, another track began that compelled the listener to move. “Perpetual” offered a very special moment of audience participation as the crowd sang along, the music slowly fading to offer center stage to the rising chorus of voices. 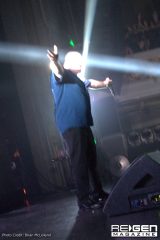 “Radio” felt like a show stealer, just the right pace for an exhausted audience to still move without collapsing, and Harris performed it with great love. “Testament” and “Nemesis” were big hits with the crowd, as to be expected of such high energy tracks. “Homeward” was well received as it allowed people a moment to breathe and Harris, despite having issues with allergies, held a single note for what felt like minutes and really demonstrated his vocal prowess. Mark Jackson drummed with his usual enthusiasm, perhaps matched only by Harris and the audience in his energy. A spectacular light show accompanied every song and became ever more elaborate and entertaining as the show went on. 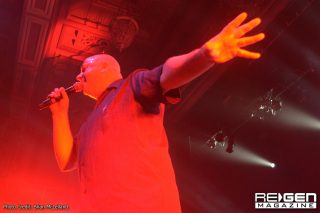 Every song felt like such a smash hit, performed with tremendous power and emotion, but the song that stole the show was a very special performance of “Electronaut,” which Harris pointed out had performed live only a handful of times, and was the closing song of the evening. Jackson and Harris performed it with so much aplomb that the spent audience had no choice but to dance ever further. Despite the fatigue in my muscles and the sweat pouring off me, I danced with as much fervor as I had at the start of the three-hour-long session.

VNV Nation live is a special and bonding experience, and Compendium was the tour to see if you’d never seen VNV Nation before or if you hadn’t seen the band in several years. It was well worth the trip!