Killing Joke is practically an institution – for nearly four decades, the prominent post-punk group has been a singular trailblazing entity whose influence has been cited and felt through virtually every genre of music since. Comprised of vocalist/keyboardist/programmer Jaz Coleman, guitarist Kevin “Geordie” Walker, bassist Martin “Youth” Glover, and drummer “Big Paul” Ferguson, Killing Joke’s sound is a juggernaut of contrasting musical atmospheres driven by spiritual and sociopolitical themes; constantly autonomous and innovative. Live performances are not simply shows, spectacles of technical prowess and artistic synergy for the entertainment of faceless throngs; Killing Joke refers to such performances… nay, the fans themselves as the gathering, a ritualistic congregation in which audience and artist participate in the primal energies of musical enjoyment and creation. 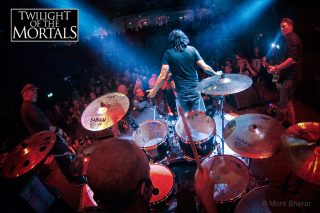 In 1982 after the band’s third album, Revelations, (and after Coleman and Walker moved to Iceland in preparation for an impending apocalypse) original bassist Youth left the group, with he and the late Paul Raven exchanging duties over the years, but after Big Paul’s departure in 1987, fans would have to wait over 20 years for a reunion of the original lineup. Sparked by Raven’s passing in 2007, Killing Joke felt a renewed sense of duty and creative vigor, leading to what has been the band’s most intensely productive period yet. Albums like Absolute Dissent, MMXII, and Pylon, along with several live releases and compilations have demonstrated that even nearing their 60’s, these four musicians still wield enough vitality and energy to remain at the top of the musical pantheon. 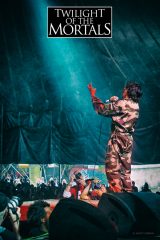 It’s not often that a band can achieve such a feat in what for many would be the twilight years of such an endeavor, but Killing Joke is not the ordinary band; appropriately so, Twilight of the Mortals is not any ordinary biographical read with a few photos for good measure. As author/photographer Mont Sherar states within the gorgeously laid out pages, “Gods walk amongst us and their names are Jaz, Geordie, Youth, and Big Paul.” As if to live up to the gravitas of such a statement, what we have here is an immaculate tome, a document of Killing Joke’s original lineup reformed and revitalized, shown through Sherar’s reverent lens. Collecting over 200 photos chronicling the years following the reunion and showcasing Killing Joke in its element live and in the studio, along with contributed writings from a variety of individuals close to and familiar with the band’s particular idiosyncrasies, every word and image in Twilight of the Mortals coalesces into an intimate, almost holy portrait. 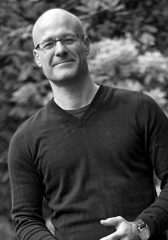 To put it quaintly, this is some piece of work for a Copenhagen, Denmark based Canadian photographer who gained prominence in the ’80s as Miami’s foremost alternative DJ. With a foreword by author and punk rocker John Robb that summarizes the group’s history with just enough of the essential details without losing the focus of the reformed “twilight” years, Sherar’s introduction is the stuff of legend as he recounts his early days in the emerging alternative, industrial, and post-punk club scene of the ’80s – there is a comfortable familiarity to his reminiscences because we’ve all lived it in some form or another. From the initial attempts to fit in with the prevalent fashion sense to the chance encounters with individuals who would later turn out to be significant players in themselves (in this case, Skinny Puppy’s cEvin Key and artist Steven R. Gilmore), to the rather humorous misinterpretation of a lyric leading to the life-changing discovery of what would become one’s favorite band, to finally developing a personal and professional relationship with said band, Sherar’s story is compelling in its simplicity and intimacy. Yet through it all, Sherar comes across as constantly awestruck and humbled by his experiences, with him even going so far as to say that despite the tag, he does not consider himself a photographer – rather, a DJ/promoter and an adoring fan with little more than a $7.00 Kodak disposable camera. 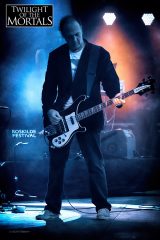 Indeed, the book’s first photo shows Jaz Coleman with hand outstretched to obscure his face save for those distinctively penetrating eyes, a shot Sherar took in 1989 at the Kitchen Club in Miami Beach. There’s a certain surreal astonishment to so simple yet so titanic an image beginning Twilight of the Mortals, Coleman almost bestowing upon Sherar the responsibility that he would take on during the band’s “twilight” years, with Sherar stating that he’s “never topped that first shot.” Of course, flipping through the book’s pristine pages, it would be hardly a challenge to dispute that statement. Each image is so painstakingly crafted in composition and tone, it’s clear that while the image captures a fleeting moment, Sherar has the skills to make that moment last into infinity; as publisher/editor Dr. Pete Webb states in the book’s afterword, such affectations do not detract from the “reality,” but serve to enhance the emotion and aesthetic of what Killing Joke represents to a world so dimly aware of it. 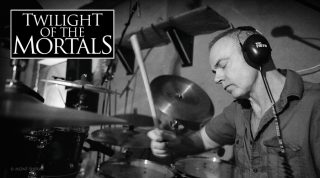 It can truly be said that a single image can speak a thousand words, each photo a lushly composed document of a single spontaneous moment in time spanning the eternity of seconds during which Killing Joke continues to inspire and amaze. Part of that amazement, brilliantly captured by Sherar’s discerning eye and writer/musician Fletcher Stewart’s insightful descriptions, is in just how articulately well rounded these four Gods on Earth are in their artistic and creative endeavors, manifesting intensity in their own unique ways – Coleman as author and classical composer, Youth as legendary music producer, Geordie’s devotion to transcendental tonal perfection, and perhaps most especially Big Paul’s artwork, a firmly physical and visually muscular expression of what he produces audibly as a drummer. 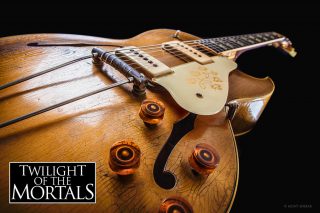 In two brief but poignant sections are we given a glimpse of the depth of his abilities and the strong artistic bond he shared with the late Paul Raven; as his brother in the rhythm section along with Youth, Big Paul’s stone sculpture titled “Raven Made Me Do It” is a touching tribute to the band’s fallen brother (and in his words, “perhaps a catharsis”). Also noteworthy is the attention Sherar gives to the “force of nature” that for many has been the core of the band’s sound – Geordie Walker’s 1952 Gibson ES-295, shown in gorgeous angles to exhibit the beauty of this instrument, its Aztec gold chipped away and tobacco stained from years of Walker wielding it like a weaponized Stradivarius. Credit is also paid to extended members of the Killing Joke family like live keyboardist Reza Udhin, guitar tech “Diamond Dave” Simpson, and Pitchshifter drummer Jason Bowld, who had the unenviable honor of filling in for Big Paul on one occasion and expounds on the dynamically communal, “almost a religious experience” that encompasses a Killing Joke gathering – “You realize, without question, why people say that and how true it is!” 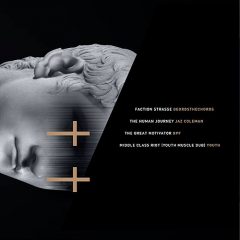 Special editions of Twilight of the Mortals come with a special bonus – a dual 7-Inch silver vinyl EP with an exclusive solo track from each member of Killing Joke. Beautifully packaged in artwork by Steven R. Gilmore, this presents a marvelous audio accompaniment to Sherar’s photos, highlighting each of their individual strengths in a manner that proves just what sort of synergy exists among them as a collective unit. Not only that, but each track is a reminder of the significance that Killing Joke has had in a society seemingly in a not-so-steady decline, the urgency and anger and the need for positive changes to be made in the way humanity conducts itself politically, economically, spiritually… one need only listen to “The Human Journey,” in which Coleman speaks with Sherar about the striking radiance of hope and swift action that makes Killing Joke a still relevant force in today’s musical landscape. 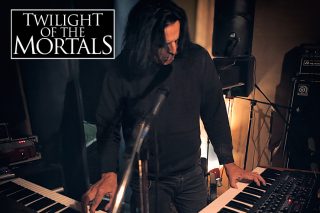 Further proof can be heard in BPF’s “The Great Motivator,” the steely guitars of Mark Gemini Thwaite resonating shrilly amid Big Paul’s thunderous tribal percussion, the ferocity of his playing matched by his acerbic chanting, a litany of the fears we continually feed to our detriment. Long renowned and sought after for his lushly orchestrated remixes, Youth offers an appropriately titled dub mix of his “Middle Class Riot” upon which muscular layers of slithering electronics, haunting vocal reverberations, and crystalline guitars create a smooth helping of audio tension, while Geordie Walker touts his GeordstheChords moniker with “Faction Strasse,” a track that with its blend of industrialized synths and rhythms topped off by his inimitable distorted howling guitar tone proves the extent to which he has been the heart and soul of what we identify as the Killing Joke sound. 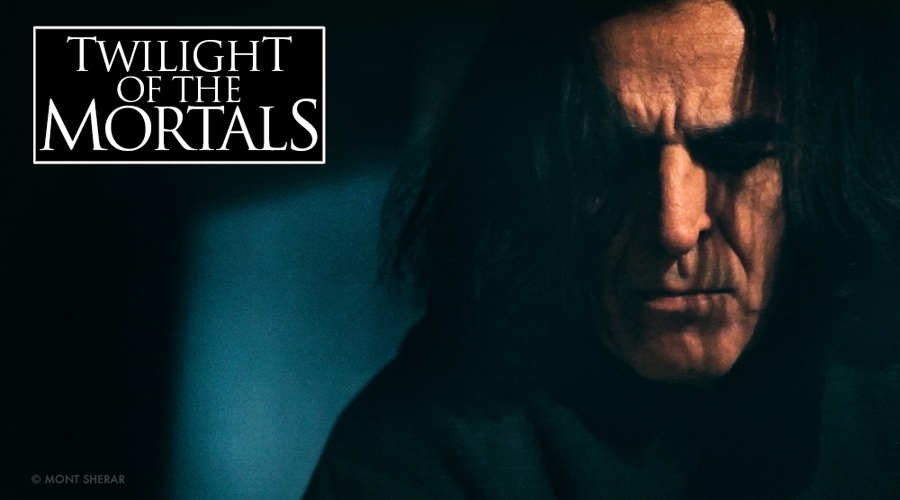 With his own autobiography, Sex WAX n Rock n Roll currently in the works, sure to provide of his unique insights in the alternative music scene he loved and participated in, Mont Sherar has crafted here a striking and strident tribute to one of the great volumes of our time. Published by PC-Press in softcover, hardcover, and the deluxe collector’s edition, Twilight of the Mortals is an essential addition to any serious music lover’s collection.