The Cocks at Stimulate, NYC0 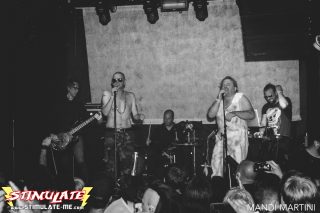 Once upon a time, before people stopped buying vinyl and then started again, and before literally everyone in Brooklyn was a music producer, there were few notable stars in the industrial scene. And there was perhaps no single bigger personality than “Uncle Al” Jourgensen, that temporarily faux Brit of “Revenge”-era MINISTRY Cuban American who one day suddenly spilled out all over the scene and turned music into a chain-linked drugged out haze of cowboy twang and chunky guitar riffs. Chasing dragons and immortality from Chicago to Texxarkana, ’80s Al had the Midas touch, and the power-packed stadium sludge of his Revolting Cocks could do no wrong. It’s ironic, then, that as the band reunited founding members Luc van Acker and Richard 23 alongside past participants Paul Barker and Chris Connelly for a limited six date tour as The Cocks that kicked off Friday night at Stimulate in New York City, Al would be the only one absent. Bad blood has very publicly boiled between Jourgensen, Barker/Connelly over the years. In fact, Jourgensen has even famously talked shit about his own fans – saying he didn’t appreciate them, only their money, in a 2013 interview in Spin Magazine. Instead, in his place was Jason Novak – of one time Fifth Colvmn act Acumen (Nation) – who despite being the notable non-original member might actually be the biggest story here. 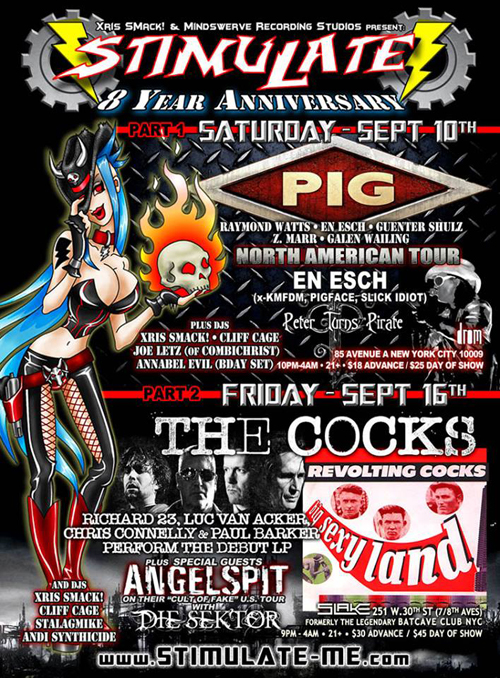 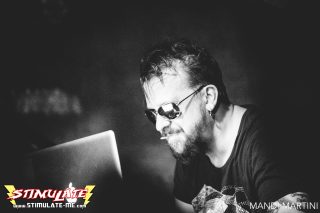 Novak has in recent years become a grand facilitator in his own right, not altogether dissimilar from Al in his day. The principle in the Midwest’s ColdWaves Festival, Novak orchestrated the event initially as a solemn but successful musical tribute to former band mate and good friend Jamie Duffy, who tragically took his own life in 2012. The promoter nee musician has also been artistically active in the contemporary Cocksure, which pairs him with vocalist and erstwhile Cock, Connelly. On this night, he wore the lowest profile of the bunch, but to be sure it was Novak’s hand on the wheel. Stealthily, from the back corner of the stage, he drove the band down industrial/rock’s memory lane, plodding front to back through 1986’s seminal “Big Sexy Land.” With Barker’s distinctive bass propelling repetitive rhythms, Richard 23 grunted and howled through classics like “38” and “T.V. Mind.” Later, the crowd surged and sweated inside the pit as van Acker slithered through “Attack Ships…” and old school heads erupted with flailing arms and chants of “someone, somewhere, wake me up!” Connelly – who initially joined RevCo only after Richard left – literally did the same in concert tonight, finally appearing onstage for an extended encore of sorts, which featured a selection of latter-day hits like “(Let’s Get) Physical,” “Stainless Steel Providers,” “Crackin’ Up,” “Beers, Steers & Queers,” and others. 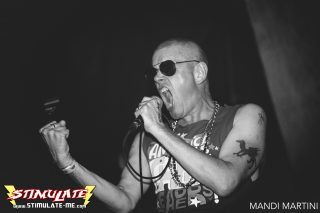 In all, the band proved itself capable of being every bit as energetic and engaging without Al; the sheer power of the performance indicative of an act whose contribution to this scene is as storied as their former antics. On a personal note, I’d like to add that I found it fitting that such a legendary act be brought in by the Stimulate crew and Xris Smack – a man with a lot of history himself – who this writer first met in 1987 (a year after Big Sexy Land‘s release) when we were both young punks trying to break into the business. Kudos Xris, and congratulations Cocks on an impressive and rewarding return.