McAnaly: No Esteemed Deeds is a bit of an expansion from prior releases from The Derision Cult. I made a concerted effort to build all the tracks off the drum and bass, whereas on prior albums, I pretty much always started with a guitar riff. It’s still very much a guitar-centric album (and all the guitars are instruments I built myself), but I think that approach gave more of a pulse to the tracks. Sam Buck, who co-engineers a lot of my projects, really pushed me to dial back a lot of the effects and let the sounds and vocals speak for themselves, which I think ended up improving the intensity and presence. It’s still heavy, but definitely has a lot more textures than past Derision Cult records. I actually sing on parts! That’s something I’m really proud of. 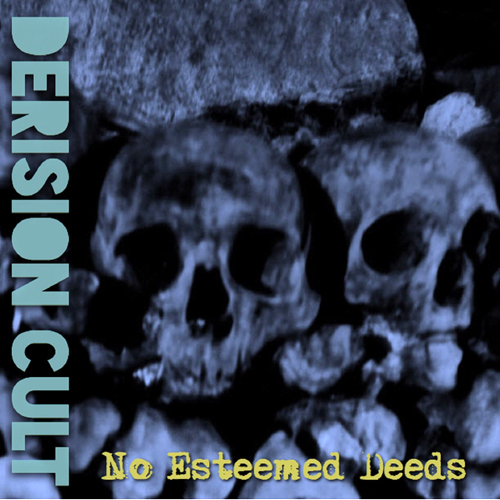 The Derision Cult is like a journalism project in a way. I use it to write about what’s going on in the world vs. me personally, and I think I was pretty successful in keeping my personal views out of it with No Esteemed Deeds (with the exception of ‘Pussy Grabs Back,’ which is my take on all the guys getting busted for being pigs because I have a daughter and give those assholes no quarter). So, it’s not really political in as much as a record of what I feel are key themes going on in the world. Other projects like Jefferson Dust are more about storytelling, but that’s a whole other genre. No Esteemed Deeds comes from a monument in a park where I mountain bike. They buried all remnants from the Manhattan Project south of Chicago. Deep in the forest (like, a good five or six miles from the road), there’s this open field where no trees grow and this stone in the middle. It’s a warning for generations hundreds of years from now, warning them not to dig there. It has a line that specifically says, ‘No Highly Esteemed Deed is Commemorated Here,’ which I thought was a strange use of words. I took the photo myself in the catacombs in Paris this summer… those skulls are people who died during the Third French Revolution. All in all, I thought the No Esteemed Deeds thing wrapped it up nicely.

No Esteemed Deeds is available through South Street Dungeon, on The Derision Cult Bandcamp page, and through all major streaming services.

McAnaly: I could go on and on, but here’s who I think directly influences my Derision Cult music the most.

McAnaly: I’ll stick to how these albums influence me.