On February 16, 2013, the third Saturday of the month, ReGen mainstays DJGX and Pariah hosted a new “all industrial” night, titled ReGeneration. Held in association with ReGen Magazine, ReGeneration debuted at Club Orpheus in Baltimore, MD, one of the town’s longest running nightclubs, which has over the years held a number of scene-related nights and events. Resident DJ and club manager Nyxian Hollow also contributed to the night’s proceedings, and a great deal of promotional materials by several bands and labels was offered, as well as DJGX offering CD-Rs of his DJ sets.
Although ReGeneration’s inception featured a modest turnout (primarily due to the date following Hanzel und Gretyl’s local performances in Towson and Delaware the previous two nights, as well as Katuscon and Wicked Faire being held on the same evening), those in attendance seemed to approve, while those unable to attend expressed support for and interest in future events.

While the original plan was for the night to be held every third Saturday of the month, the month of March has seen ReGeneration derailed for two reasons: 1. Due to Orpheus’ plans to host a St. Patrick’s Day, the night was to be rescheduled for the following Saturday on March 23, which leads into the second reason; 2. The Baltimore Filth Fest is being held on March 23, featuring industrial music from Theologian, JM/Wave, and a variety of other dark and heavy forms of music. As ReGeneration’s policy is to avoid competition with other scene nights and related events as much as possible, this date proved problematic as well. Thus, the decision was reached to cancel ReGeneration for the month of March.
The Batz Over Baltimore night is held on the third Saturday of the month at the Depot in Baltimore, but this night focuses on classic goth, death rock, and a more varied mix of EBM, electro, and industrial. As such, ReGeneration offers no competition, but simply an alternative featuring the more singular and specific focus of industrial music.

However, there has been a palpable sense of confusion with regards to the expectations of those in attendance as to the purpose of the night, particularly given the musical selection and what constitutes “industrial” music. After much discussion, DJGX and Pariah have prepared this Manifesto statement to further explain the intent of and what people can expect from the future of ReGeneration. 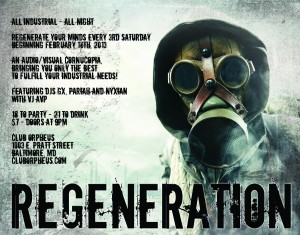 Let’s face it: Industrial music is not what it once was. Such can be said of any form of music, art, or media – be it television or movies, artistic and musical movements and styles… it’s because the people aren’t the same. Not only is there a newer generation (perhaps a younger one, though it is difficult to say with regards to underground music whether that pertains to the age group, whether the new generation is actually younger in years), but the older generation has changed as well. People change over time, constantly in a state of flux and development; tastes change, music changes.

What once started out as a form of avant-garde, almost anti-music, using unorthodox methods and tools to create sound that could be molded into some form that could be called music has now been turned into gritty and glorified dance music, not too far removed from techno. The four-on-the-floor beat so prevalent in modern electro, EBM, and whatever other meaningless subgenre or category that runs rampant now has become the dominant element in a style of music that was once meant to nurture creativity and innovation. If one were to trace industrial music back to its roots, one would easily find it to be as difficult to understand now as it was in its inception. The virulent sounds of Throbbing Gristle, the scathing atmospheres of Skinny Puppy, the apocalyptic dirge of Godflesh… all of it was rather disturbing, almost confrontational, challenging audiences and the limits of what they found acceptable.
True as it may be that EBM began as a subgenre of industrial music, an innovative style of danceable beats utilizing different sounds and technology – industrial dance music, if you will. But once again, the conventions of the genre, to the degree that EBM eventually became its own genre and gave rise to various other forms (terror EBM, aggrotech, power noise, etc… which are all essentially the same thing), have strayed away from what industrial music once was. It’s gotten to a point now that the scene as it exists almost seems to categorically hate itself, hardly even referring to itself as industrial… everyone comes up with new names to identify themselves, new genre titles that sound great but ultimately do little to distinguish the music from what is ultimately just… techno.
This is not a lament (or perhaps it is); simply a fact. EBM and industrial do still meet halfway, but it has come to a point that the two are virtually separate entities.

Be that as it may, EBM seems to reign supreme in the industrial echelon, and as such, it is a plain and simple fact that there are certain types of this particular style of “industrial” music that are overplayed. You can go to any goth or industrial night and expect to hear the same plethora of songs from the same selection of artists. Hardly, if ever, is it considered that even among early pioneers like Nitzer Ebb, Front 242, Skinny Puppy, or any of the “classics” that crowds continue to dance to today, there was music in which dancing was not the focus; even in such classics as “Murderous” or “Headhunter” or even “Assimilate,” which are almost certainly heard in clubs in this day and age, the beats may have been danceable, but there was more to the music. There was a sense of heaviness in atmosphere and subject matter, a challenging of the listeners’ perceptions of sound and style. And yet, it’s almost a given that you’ll hear these classics alongside the less substantive beat-centric sounds of Combichrist’s “This Shit will Fuck You Up” or Covenant’s “Dead Stars” or any number of tracks by Suicide Commando. The attention has shifted so that the only question that need be answered is “does it have a good beat that you can dance to?”
And why not? After all, is that not the point of a club? To dance?
But once again, it must be stated that industrial music is not necessarily dance music, which has become the prevalent attitude in the so-called “industrial” scene. Once again, EBM and industrial have become separate entities, so while there is crossover and as the earlier sounds of Nitzer Ebb and Front 242 could have once been part of the industrial lexicon, they simply have little to do with it now. Even the use of distortion and heavy percussion in the likes of Suicide Commando or Combichrist, or even Leæther Strip or :Wumpscut: could have once been part of industrial… but no longer. In the end, it’s all EBM.

So, as ReGeneration has had its opening weekend on February 16, 2013, it has become necessary to make certain things clear as to what the purpose of this “All Industrial” night is.
ReGeneration is an industrial night… not an EBM night. As stated, many of these songs – industrial in name, but EBM nonetheless – are heard ad nauseam in any goth/industrial night. So… why would you request them? Have you not heard them a million times over? In fact, don’t you already own the albums or have the songs on your MP3 playlist? Why even bother to request them since it’s almost a foregone conclusion that you’ll hear them? And if that doesn’t bother you, don’t you have other club nights to go to in order to hear the same songs and dance to them over and over again?
ReGeneration is not about that; it is not about playing the same tried (or is that tired?) selection of EBM / pseudo-industrial songs for you to dance to. As an industrial night, as industrial music was meant to challenge and confront the audience, to make them question, perhaps even hurt a little, to disturb as well as to entice them, so too is the intent of ReGeneration to challenge and confront.
This is not to say that the focus will be explicitly or exclusively old school, nor is it to say that compromise is not possible. You can still make requests, and you will still be able to dance. Sure, a bit of crossover is perhaps inevitable, and this is understandable given that the goal of a club is to play club music and get people to dance.

But ReGeneration is an industrial night… you are going to hear music that is heavy, music that is atmospheric, music that is mechanical, confrontational, distressing, unorthodox. While some of it might be danceable, it won’t be of the same EBM/techno/four-on-the-floor variety that has lulled the “industrial” scene into a state of complacent acceptance. You will hear Skinny Puppy and Front Line Assembly, Einstürzende Neubauten and some Throbbing Gristle; you will hear Cabaret Voltaire and perhaps some Coil, Godflesh or maybe even early Pitch Shifter, early Ministry and KMFDM also; you will hear Ludovico Technique or maybe some Iszoloscope or Dream into Dust…
You are going to hear industrial music. Not aggro, not power noise, not EBM… just industrial!

Photos from ReGeneration.1 can be viewed on the Sincerely Pariah website at http://www.sincerelypariah.com.
Photos courtesy of Johnny B Photography.