Gothic and horror style is certainly nothing new in the post-Hot Topic haze of underground and alternative fashion. So, how is any company to thrive in a market that is filled to the brim with styles and designs that cater to a similar market? Perhaps there is no definitive answer, but it’s certainly a question that applies to virtually all art forms, including music, and if this writer had to give an answer, it would be simply to focus on the quality of one’s work – do what you do, do it the best that you can and try to be the best that you can be… and while this level of perseverance and dedication to craft may not always be enough alone to succeed, it can only improve one’s chances. Just ask Kevin Thirteen – the founder of 7hirteen Clothing, an online boutique for gothic and horror inspired clothing. Halloween, 2016 marks his small company’s third year in production, and he was kind enough to speak with ReGen about his brand and where he hopes to take 7hirteen Clothing in the years to come, along with waxing a little horror nostalgia.

The company began on Halloween, 2013, and you said that you never set out to start a clothing line – as this year will mark the third anniversary, what can you tell us about how 7hirteen has grown, and how that growth has affected how you’d like to see things develop further? 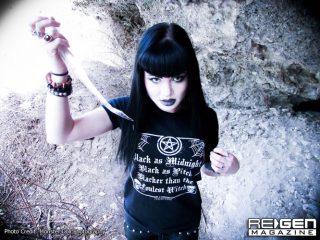 Thirteen: 7hirteen has grown in a lot of ways since it launched; most notably are the designs. I started out with one design that I did myself, very crudely, with Paint and Gimp. I had no idea what I was doing really; still don’t sometimes, I think… think. (Laughter) Since then, I’ve worked with several artists and eventually brought one on exclusively to do the final executions of my sketches and ideas. I’ve expanded my overall product line as well. Last year was a great year for me. I was very fortunate to work with some amazing models and musicians. 7hirteen was a clothing sponsor for Mikey Cox of Coal Chamber and Eric Thirteen of Combichrist. I’m a huge fan of both bands, so it was definitely a pleasure working with those guys. I hope this year brings more of the same opportunities as I try to bring even more to the table.

In your experience, what have you found to be the most effective business and marketing strategies – especially with regard to the competition from numerous other similar clothing lines? 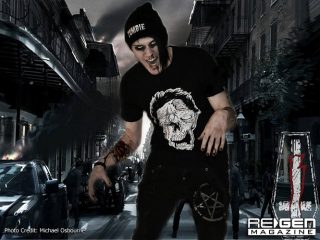 Thirteen: I try not to think too much about what the other clothing lines are doing. Being the sole owner of 7hirteen, I have a direct hand in every aspect of the brand. When people send an email asking a question or whatever, it comes to me. I try to surround myself with a small group of friends and models that I trust. I can bounce ideas off of them and I know I’ll get a genuine response. I’m somewhat antisocial, so I don’t do the horror conventions, music festivals, and public appearances like the other brands do.

What have you found to be the most major obstacles in gaining people’s interest in your products and establishing a solid customer base?

Thirteen: Obviously, making a name for yourself is a big obstacle. I’ve seen several ‘similar’ clothing brands come and go just since I started. I really just try to put stuff out there that I would want to wear myself. It’s easy to get a 100 ‘likes’ on Facebook or Instagram, but getting someone to actually want to go to your store and make a purchase is the real challenge. I just try to be real and not have an agenda other than making clothing that people will dig.

I notice looking through some of your catalog a penchant for classic horror (i.e. Pazuzu/The Exorcist, The Lost Boys, Nosferatu, Edgar Allan Poe, etc.). What are your thoughts on modern gothic and horror literature and cinema? What, if anything, do you feel has the potential to become a new classic years from now? 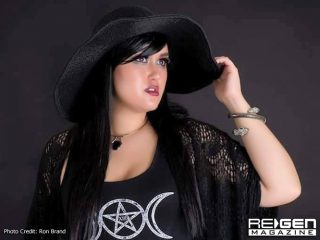 Thirteen: I’m not sure that’s even possible anymore in a way. I feel like people are kind of jaded when it comes to horror movies. I grew up watching classics like Frankenstein, Dracula, Psycho, The Exorcist; the special effects in those films were sometimes crude, but they worked. They were ‘real.’ Now everything is done with CGI and it just feels (and sometimes looks) fake.

What would you say is your top, most favorite horror movie of all time?

Thirteen: I have a huge list of favorites. I’m a huge Halloween and Hellraiser fan. But, if I had to pick just one, I would say The Exorcist. That movie scared me because it just seemed so real; like it could actually happen. When I was young, I didn’t dream about monsters. I had nightmares that the devil was coming to get me. I have that movie to thank, so yeah, that’s my favorite.