As we all trudge through the COVID-19 pandemic, the need for entertainment of any kind has grown significantly in the past several weeks as so many concerts and live events have been cancelled or postponed, venues forced to shut down, bands and artists having to socially distance as much as the rest of us. Sure, many are live streaming and creating makeshift videos and continually finding ways to keep creating, but very little can replace the experience of actually going to a show, feeling the hum of the speakers, the squeal of the feedback, participating in the roar of the audience, and seeing musicians onstage. A photo or video of a live show tends to be a poor substitute for the experience, but they at least provide a document, a reminder of the power of music felt and shared on a particular night. With this in mind, ReGen is culling the archives to present a series of previously unpublished photo galleries from shows we’ve attended over the past 18 months. 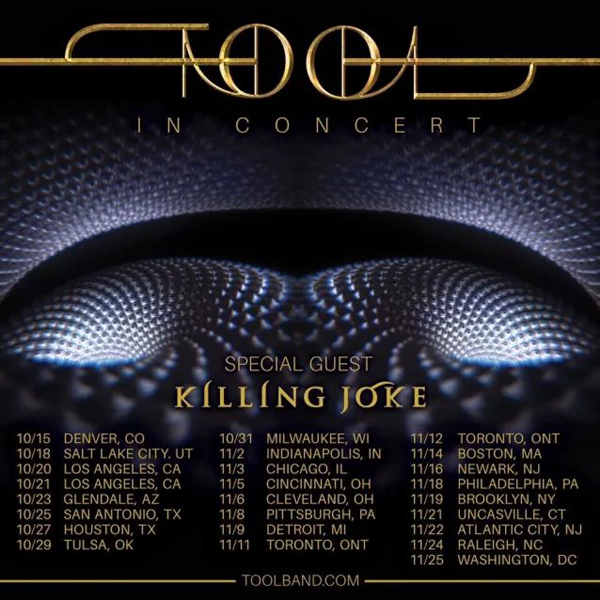 For the first entry in our series, we present a more recent event – it was one of the year’s most widely regarded, highly attended tours, and a rare one as the esoteric and experimental metal band Tool celebrated the release of its first album in 13 years, Fear Inoculum, by inviting the post-punk legends Killing Joke on a massive North American tour. Some might have questioned the logic of putting these two bands together on the same bill, but the combination was in the opinion of this writer inspired – the austerity of Killing Joke, the bombast of Tool… yet both projecting through the speakers a forceful juggernaut of sound and fury. Quite simply, you had to be there, and ReGen had the great fortune to attend the final night of the tour in Washington, DC’s Capital One Arena. What a challenge it presented for our regular News writer Lizzie Marie as she took on the role of photographer for the first time… and as you will see from these galleries, she more than rose to the occasion.
Enjoy!