Chicago electroscuzz band GoFight continues its ongoing campaign against tyranny and bigotry with the release of a band new single and music video, titled “Pussy,” making its debut on January 20, the day of the U.S. presidential inauguration of Donald Trump. Offered as a free/pay-what-you-want download as part of the band’s “Donation Ware” platform, all proceeds from the single will be donated to the ACLU – The American Civil Liberties Union – with the band encouraging listeners to develop or continue a relationship with the organiztion during the Trump presidency.

The ACLU began its operations in 1920 with the expressed purpose of defending and preserving the individual rights and liberties guaranteed to every person in the United States by its Constitution and laws. GoFight stresses to the audience, “This is about YOUR relationship with the ACLU, so we don’t want to take your money and give it to them. We want, if possible, for you to see how you can fit into their story of defending the citizens of this country from Tyranny.” 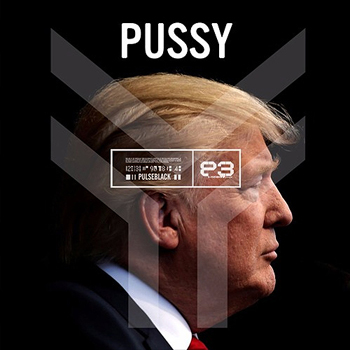 A high quality audio file of “Pussy” is now available for download via SoundCloud and Bandcamp, while the music video is now viewable via YouTube. The video was directed by GoFight drummer Vince McAley, produced by Jason Mezzerli, and features onscreen dance performances by Coda Marcus and Faith Marcus. The song will be included on the upcoming fourth GoFight album, Tokyo Sexwale, named in honor of South African businessman, politician, and anti-Apartheid activist Mosima Gabriel “Tokyo” Sexwale. Tokyo Sexwale is scheduled for release in May of 2017. The track itself, while staying true to the band’s pro-sex/anti-war stance with a tongue-in-cheek lyrical humor and blend of industrial textures with dance hall beats, funky bass lines, and catchy melodies, is so named to parody sexist statements made by Trump during the election campaign.

In a special address to the audience, GoFight front man Jim Marcus has this to say:

We elected someone who has called for ‘opening up libel laws’ to stop the press from saying things about him, who has called for bringing back waterboarding and ‘a hell of a lot worse,’ has said he would force the military to commit war crimes, advocated assassinating suspected terrorists’ families, advocated shutting down mosques, defended the internment of Japanese Americans during World War II, blamed sexual assault in the military on ‘putting men and women together,’ has praised dictators, and curried and won support from every major white nationalist hate group in the country.

We just did that.

You’re free, of course, to disagree with me, to say that the most important part of your vote was about business and jobs and ignore the fact that Andrew Puzder, Trump’s newest pick for Labor Secretary, has a long term history of fighting against worker’s rights and protections and would laughingly do away with mandatory breaks and overtime pay if he could, as recounted in an article in 2009. If he had the power.

We’re not going to get a do-over for any of this. But we can be positive moving forward. And here’s one thing we can do: We can support the one organization that is going to be there, standing up against him, when he crosses the constitution: The American Civil Liberties Union. The ACLU has been in operation since 1920 to defend and preserve the individual rights and liberties guaranteed to every person in this country by the Constitution and laws of the United States.

You can become a member, donate, volunteer, or just read up on what they do. That’s all we ask. This is about YOUR relationship with the ACLU, so we don’t want to take your money and give it to them. We want, if possible, for you to see how you can fit into their story of defending the citizens of this country from Tyranny.

In addition, Marcus – under his DJ moniker Mutilato – will be DJing at Chicago’s Underground Lounge on the night of January 20 for the Clusterfuck event. The night will feature giveways, donations accepted for the ACLU, guest hosts, and additional DJ sets from Glitch Mode Recordings artists Sean Payne (Cyanotic) and Amelia Arsenic.