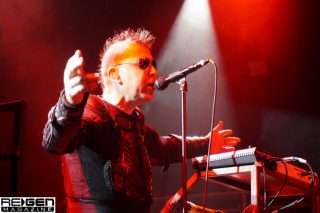 KMFDM’s tour across the USA with CHANT and Legion Within might have run its course, but the Ultra Heavy Beat masters have never before missed a chance to indulge their British audience and their return to London was every bit as memorable and exciting as you would expect from the godfathers of industrial rock and the genre’s undeniable titans. The gig might have been in danger of losing some of its impact without the two supports that shaped the experience for the American fans, but that was certainly not the case. The night in Islington belonged to the devoted group of enthusiasts and newcomers alike that welcomed KMFDM like legends should be welcomed – with an alcohol induced exaltation and uncontrollable shrieks of admiration tearing through the air. 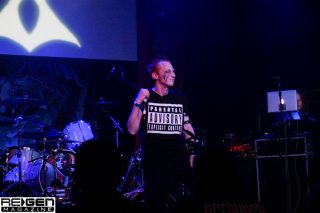 The show opened to a scattered crowd of “between one and one hundred” as jokingly observed by the front man of Spawn of Psychosis who began the night’s debauchery with an aggressive onslaught of industrial metal sensibilities. The mixture of heavy riffs, electronic manipulations, and spoken vocals was clearly rooted in dated trends, but the undeniable energy of the performance helped set the mood for acts that followed. 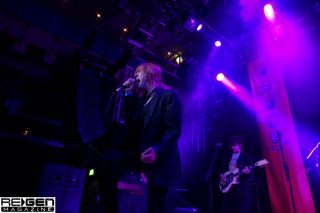 Explode the TV caught the audience by surprise, sporting the indie rock appearance not unbeknownst to the British mainstream, but perhaps strangely out of place on this occasion. With the venue already filling up, the band played a set that was energizing and delirious in this special, Velvet Underground kind of way that momentarily transports you beyond the narrow constraints of any musical stylization. There was perhaps nothing truly revelatory in the method or sound, but the grit of acoustic guitars and persistence of manic, dominating percussion slowly drew the audience in. By the time Explode the TV exhausted the scene time, the charisma and rock & roll grit embodied by the band’s vocalist Bentley Browning settled with the anxious crowd that embraced the music at face value, showing the true power of live performances and their capacity to transcend assumptions and tastes. 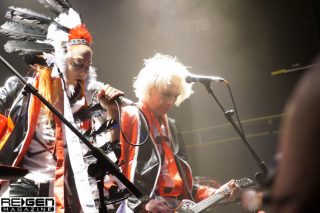 Alas, in some ways all this was merely a prelude to a lengthy and unpredictable turn from UK punk legends Sheep on Drugs that in one form or another rocked the country for over 20 years. The leather clad duo of Lee Fraser and Johnny Borden provided a sleazy, powerful rock extravaganza that swayed between the elements of electro, hardcore, and demented stage improvisation, exemplified by tracks like “Life’s a Bitch,” which saw the band tearing clothes off in an act of sexual abuse, as thrilling as it was disturbing to watch and enjoy. The self-created vortex of chaos and madness resonated from the stage and the magnetism of Borden’s uninhibited presence brought the crowd to the verge of musical ecstasy. The theatricality of Sheep on Drug’s act was potently exemplified by the raw nature of the band’s music that can feel at home among the London crowd, perhaps better than anywhere else in the world. 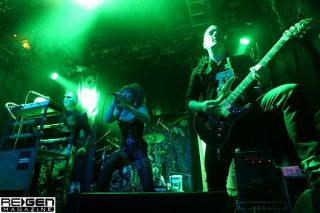 After a brief break, majestic orchestral tones heralded the arrival of the night’s main event. KMFDM rocked the shit out of the London stage and in one sweeping motion, “Krank” invited the crowd to the edge of the scene. Fresh hits from this year’s KUNST invigorated the audience and “Ave Maria,” “Pussy Riot,” and “Animal Out” were all embraced instantly, swallowed amid the shrieks of “KMFDM sucks!” thrown in the direction of the band. “KUNST” itself appeared to be a massive hit with the now infamous chorus electrifying the venue. Käpt’n K pushed forward and took the reins on the explosive “Potz Blitz!” with Jules Hodgson making every angry riff his own. Between Lucia Cifarelli’s sensuous movements (to which “Intro” really does not do justice) and Sascha Konietzko’s commanding presence, KMFDM administered song after song an overwhelming mix of new and not so new material that proved why the band continues to dominate the scene. With the ruthless, infectious tones of “Hau Ruck,” everyone seemed to collectively reach a precisely orchestrated climax.

When KMFDM had to inevitably wave goodbye, the gathered crowd, despite the nearing curfew, wouldn’t let the legends go. And it must be said what a crowd it was. No other industrial act has ever managed to pull such a varied audience to this London venue – old rockers, kids, and gas masked aggrotech aficionados made up a demographic that only a band with almost 30 years of continuous musical gravitas can bring under one roof; a roof that was very well in danger of being brought down when the building trembled under the weight of restless feet that demanded more. “WWIII” sang for the encore helped appease the restless masses. 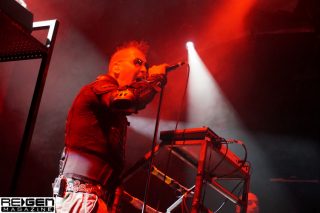 Those truly insatiable headed to a nearby gothic lair – Slimelight – for an extended night of EBM excess and an afterparty, courtesy of FGFC820, but not one soul could possibly leave the building disappointed. Years pass, trends settle and then disappear, but KMFDM is here delivering an incredible live experience that doesn’t cease to entertain and exhilarate. Let’s hope that the band will continue to “Krank it to 11,” because no one else can do it quite like KMFDM.