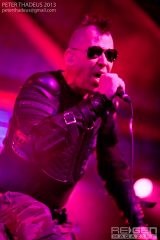 Showbox SoDo was packed with a varied crowd and a genuine, buzzing excitement for this final show of the KMFDM KUNST tour, featuring the return of Legion Within and Steve White. Despite this being the last stop of the tour (or perhaps because of it), there was no lack of energy from any of the bands, which truly made this show an experience to be had.

Nightmare Fortress opened for the show; a fairly newer band with talented and brooding vocals by Alicia Amiri. There were some technical difficulties before the second song, but the band started strong and picked up again quickly. Despite a selection of danceable tracks and a highly entertaining light show, the band’s performance really could’ve used better lighting – it was rather difficult to really see the artists, which slightly hindered the audience’s ability to connect with Nightmare Fortress, even though the sound was clear. Each member of the band was quite skilled as a whole, making for an all in all solid opening act. It will be interesting to see where this local Seattle group goes. 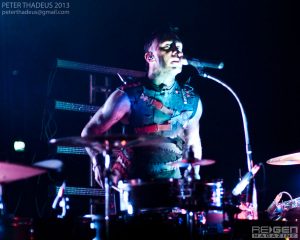 CHANT drew a slightly larger crowd and there was an unmistakable steady progression of energy as each track played. This aggressive tribal/industrial duo did a good job at getting the audience to warm up to them, playing exceptionally hard for this last stop on the tour. Bradley Bills is quite the onstage multitasker as he switched between drum sets, all the while handling the vocals. CHANT has been well received on this tour and that trend did not stop in Seattle as the band’s hard beats satiated the restless crowd to keep people moving. 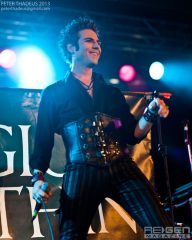 When Legion Within came to the stage, the band’s hometown fans grew a lot more energetic and enthusiastic. Despite the less aggressive sound, the quintet pulled more interest from the crowd than the previous bands. William Wilson is a sensual performer with incredible stage presence that draws you into Legion Within’s dark and hypnotic world. This darkwave/industrial musical experience demonstrated that the unique, romantic sound and charisma doesn’t just merely hold its own with the more aggressive and industrial bands, but that they’ve also completely earned that place on this tour. 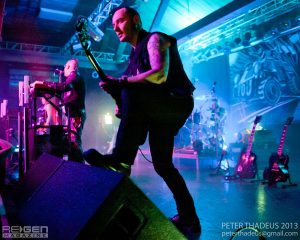 KMFDM packed the venue though, opening with “D.I.Y.” The band actually played a good mix of its extensive discography, pleasing fans both older and newer. There was nothing but high energy in the crowd as KMFDM performed each song to perfection, showcasing themselves as true industrial giants, as well as masters of their craft. The live experience of KMFDM is truly spectacular – Sascha “Käpt’n K” Konietzko and Lucia Cifarelli were relentless and incredible as ever with their dual vocal assault, and the whole band keeps consistently proving that they are not merely still relevant but kick just as much ass as they ever have (if not then more so).

This was not a show to be missed by any means. The high energy, the bands, the fans, and the music itself made a night not easily forgotten and left no one disappointed. Seattle really welcomed home their local musicians and their touring band warmly. The wait for the next KMFDM or Legion Within shows will surely feel too long.