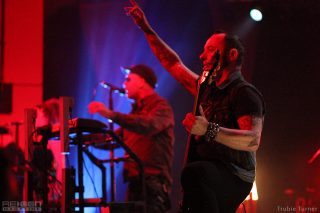 After a long Ultra-Heavy Beat drought, KMFDM finally returned to Pittsburgh to support the latest album, KUNST, and Pittsburgh enthusiastically welcomed the band back with open arms and a surprisingly sold-out crowd. Accompanied by Legion Within and CHANT for the tour and local artists Rein[Forced] supplying additional support, the lineup made for an interesting and varied night. 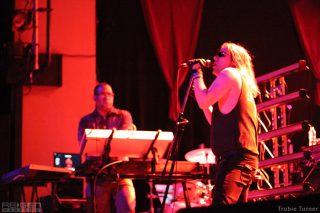 Local darlings Rein[Forced] opened the evening led by Electronic Saviors compilation mastermind Jim Semonik. Celebrating five years cancer free, Semonik and band mate D.A. Turner belted tracks from their latest album X Amount of Stab Wounds in the Back as well as tracks featured on Semonik’s charity compilations and previous albums. The early Pittsburgh crowd obviously enjoyed seeing the hometown heroes give it their all as they opened for one of their major influences. Semonik commanded the stage with his usual rock star swagger and made the most of the act’s short set. 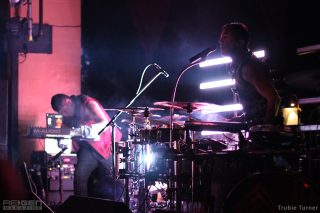 Austin, Texas based duo CHANT took the stage next and offered up quite a surprise for the unsuspecting Pittsburgh crowd. Originally slated to only accompany the tour for a limited time, KMFDM later invited CHANT to join for the tour’s entirety, and it’s easy to see why. The tribally infused, percussion focused act seemingly aims to take up the mantle of junk punk pioneers Babyland with its raw energy and bang and clang sound. Mild-mannered Bradley Bills becomes a 10 foot tall flame-spewing demon when behind a drum set, and the band’s excellent use of stage lighting and smoke effects only intensifies the effect. The act’s limitless energy, superb stage presentation, and all around excellent performance was hampered only by the venue’s sound levels, which had the bass up to the point of distortion, at times over accentuating CHANT’s backing track beats rather than the excellent drum work put on display and partially drowning out the synth work. 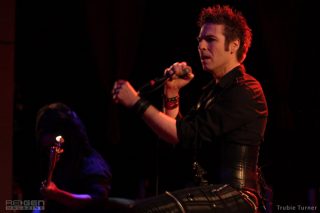 After CHANT’s red hot performance, Seattle’s Legion Within took the stage next. A somewhat odd change of pace, Legion Within is best described as an electronic glam gothic rock hybrid. Founder and front man William Wilson certainly commands attention with his peacock struts and ability to work the crowd, but Legion Within’s music, unfortunately, proved to be a bit forgettable. The act seems to have all the right ingredients to be successful, but just lacked the strong hooks and distinct style to really make for a great performance. That said, the audience still responded well to Legion Within and the performance, which is still an impressive feat when sandwiched between two high intensity acts. 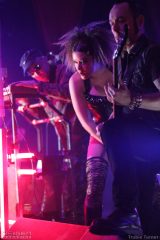 With the buzz of excitement and anticipation think in the air, the members of KMFDM finally revealed themselves to the packed house and was given a raucous reception. While largely focusing on the band’s work from the last decade and only dipping into the older discography two or three times, mostly saved for the encore, this still offered six albums of content for KMFDM to pull from. The forever stoic Sascha “Käpt’n K” Konietzko commanded the festivities from his electronics podium as the sultry Lucia Cifarelli worked the crowd. Playing a deliciously long set, KMFDM cherry picked the best songs to showcase the talents of the current and longest running lineup with Steve White and Jules Hodgson also providing a commanding presence at the front of the stage. The audience swirled and churned responding to the ripping guitar and Ultra-Heavy Beat, sending bodies flying and leaving venue staff scrambling to handle the explosion of enthusiasm. KMFDM’s only misstep came during the encore. The initial excitement of hearing the first few notes of the classic song “Anarchy” quickly subsided when Legion Within’s William Wilson took over lead vocals for the track. Wilson is clearly a talented vocalist, but he really wasn’t the right person to attempt to fill the very large shoes of Tim Skold on a song that wasn’t written for Wilson’s vocal style. It was a valiant attempt, but was, unfortunately, still a small disappoint in an otherwise stellar set.

For Pittsburgh, the dark night was over and KMFDM had finally returned to the ‘Burgh bringing some great music and leaving an obviously satisfied crowd. One audience member even had his brow busted open and from the look on his face, he couldn’t have possibly been happier. While the Pittsburgh scene has struggled at times in the past, there was certainly no evidence of it on this evening for the people came out in force. Let’s hope that with this reception that Pittsburgh won’t have to wait quite as long for KMFDM to return.