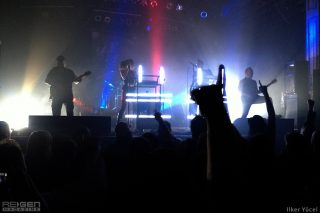 Philadelphia is often hailed as the city of brotherly love, although that does little to explain the curfew that was in effect on this particular Tuesday night at the Trocadero Theatre. With the doors opening promptly at 7:00pm, and the show beginning shortly thereafter, the triple header of KMFDM, Legion Within, and CHANT had but a short time to send the attending crowd into industrial rock frenzy as only they can deliver. Held at the Trocadero Theatre, the venue attempts the ambience of a classic concert hall with a slightly modern edge – split into two sides, one featuring the bar area for 21+, the other for the all ages crowd, with the upstairs featuring theatrical seating and a smaller club area for after parties. Hardly as intimate as the previous night’s tour stop at the State Theatre in Falls Church, VA, but certainly one more suited to large scale shows such as this. 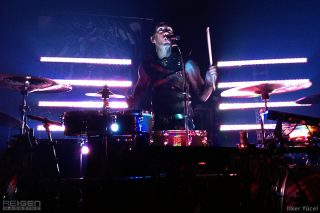 CHANT has certainly impressed on this tour with a blistering stage performance that simply should not be missed. And elaborate lighting rig, band mate Kristopher Robin switching between a moving keyboard stand and secondary drums, and front man Bradley Bills singing all the while pummeling away behind an extensive array of percussive power, CHANT truly shines in the live environment. The scattered but enthusiastic crowd gradually gained in size throughout the set, heads bopping and fists waving to songs like “Point and Click” and “Revolt,” while the emotive atmosphere of “Need” demonstrated the band’s more introspective side without losing an ounce of the energy. As he did the night before, Steve Archer of Baltimore’s Ego Likeness joined on guitar for “Crash Me” and “Empty,” making for a scathing display of raging industrial rock. By the end of the set, there was no denying that Bills had accomplished his mission of presenting the musical prowess of CHANT to a crowd in dire need of a new hero. 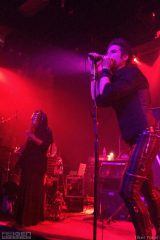 Following such a hard-hitting display is no small feat, but Seattle’s Legion Within proved to be more than adequate to the task. Pulsating synths underscoring the veritable wail of gothic guitars from Paul MacCusick and Shannon Cole and smooth bass lines a la Erica “Raven” Branch-Butler, backed by the precision drumming of Aaron Nicholes and fronted by the manically entertaining William Wilson, this band certainly knows how to dish out the rock & roll fury. Having seen them perform two nights in a row, this writer had to remind himself that this was the band’s first full scale tour outside of the West Coast; each member of the band was on point and giving it his or her all as usually only the most seasoned veterans can do. With the thunderous roar of “Rise” garnering a few members of the crowd to join in the shouting rebellion, Wilson and company quickly won over the audience. Other crowd pleasers included a faster paced version of “Fascisti,” as well as the frantic and electrified renditions of “Someone’s Speaking” and “Mouth of Madness.” Alas, given the night’s curfew, Legion Within’s set was criminally brief, although it was enough to see and hear from the bellowing applause that the band had earned Philadelphia’s approval. 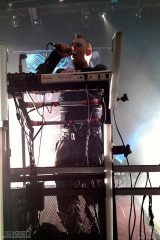 The lights dimmed, the classical music faded from the speakers, and the martial bombast of “D.I.Y.” exploded like a battery of cannons, signaling the arrival of KMFDM to the stage. From the onset, the crowd was ready to join in the Ultra-Heavy Beat’s celebration of 29 years of conceptual continuity, shouting the chorus back to the band and waving fists and devil horns as high as their arms could stretch. The majority of the set focused on the band’s latter decade, with “Quake,” “Ave Maria,” “Pussy Riot,” “Animal Out,” and the title track from the current KUNST album receiving quite the approving response. As the set wore on, the band seemed to get heavier and even livelier, matching the audience’s growing fervor with songs like “Free Your Hate” and especially “Son of a Gun” sending people diving for the moshpit. Guitarists Jules Hodgson and Steve White are ever the wrecking crew of scathing riffs and incendiary solos, while Andy Selway’s proficiency as a drummer simply cannot be understated. Vocalist Lucia Cifarelli’s renowned combination of sexy stage presence while balancing her voice between riotous screams and sultry melody is in fine form, while Sascha “Käpt’n K” Konietzko commands both band and audience like a general, exhibiting all the confidence and power of a young man despite the fact that he’s been heading KMFDM for nearly three decades. And the kids just love it! 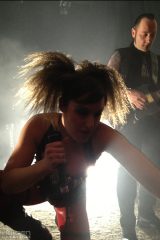 Legion Within’s William Wilson joined the band for “Anarchy,” a song many (including this writer) have been aching to hear live again; while Tim Skold’s voice on the song is noticeably absent, Wilson puts in a noble effort to make the song his own, his darkwave drawl lending a slithering vibe that sat well with some, though perhaps not as much with others. With “Hau Ruck” closing the set out to leave the crowd shouting for more, the band returned to shouts of “Old school!” Quickly did the band oblige with a rendition of “Sucks,” new song “I Heart Not” bearing the riffs and rhythms of “Don’t Blow Your Top,” and finally the favorites of “Megalomaniac” and “A Drug Against War” sending people into a furious onslaught of moshpit mania and bringing the night to a loud if somewhat early close.

Spinning his trademark mixes of danceable electro, DJ Mighty Mike Saga hosted the after party on the above level, allowing the fans the opportunity to partake in drink and conversation with the bands. The city of brotherly love certainly lived up to its name as CHANT, Legion Within, and KMFDM all received their due adulation.