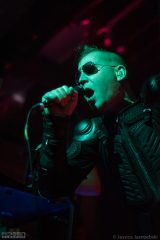 At first glance, the State Theatre in Falls Church, VA might not seem like the ideal venue for a hard-hitting industrial rock extravaganza. Then again, industrial music is all about challenging perceptions and conventions; so who better than the purveyors of industrial rock– KMFDM – to do just that? 29 years and still going strong, the Ultra-Heavy Beat celebrates the release of its eighteenth album, KUNST, on tour with the tribal/industrial assault of CHANT and the dark rock of Legion Within. For a Monday night, the attending crowd began enthusiastically enough, people taking the time to partake in food and drink before the first band took to the stage. 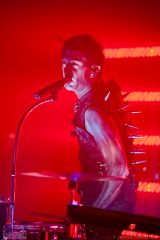 Hailing from Austin, TX, Bradley Bills with his CHANT project has garnered a great deal of accolades for his fusion of tribally influenced percussive displays with the standard fare of guitar and electronic based industrial. Backed by an impressive lighting rig, Bills’ musical prowess was apparent from the onset – performing vocals while standing behind a mix of digital and acoustic drums (including a battered trash can and a mangled satellite dish), and occasionally switching to a sitting kit. From the blistering anthems of “Point and Click,” “Empty,” and “Revolt” to the atmospheric bombast of “Need,” CHANT started the night off with an explosion of power that was downright infectious as the crowd steadily moved its way closer to the stage with each passing note. With band mate Kristopher Robin providing support on a moving keyboard stand reminiscent of the Keyborg famously employed by Cyanotic (himself also at times providing percussive accompaniment), and Steve Archer of Ego Likeness joining on guitar for “Crash Me,” CHANT immediately won the audience over with a viciously intense performance. 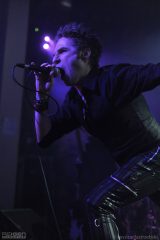 Legion Within took to the stage next to bring a welcome change of pace to the night’s proceedings; no less energetic and hardly lacking in volume, but offering a much more rock oriented approach that some might have found a curious fit with the industrial onslaught of the other two acts. Regardless of such misconceptions, from the political diatribes of “Fascisti” and “Rise” to the blazing electro breakdowns of “Someone’s Speaking” and “Mouth of Madness,” Legion Within may possess a more gothic tone on record, but in the live setting, the band demonstrates a fury to match that of the fellow tour mates. With William Wilson’s oscillations between a baritone drawl to an impassioned wail, coupled with his rock star swagger, backed by the smooth bass lines and cool stage presence of Erica “Raven” Branch-Butler, the screaming wall of melodic noise from guitarist Paul MacKusick, and the rhythmic backing of keyboardist/guitarist Shannon Cole and drummer Aaron Nicholes, Legion Within played with all the fervor of longtime veterans. With the audience gaining in size and volume, it was difficult to remember that this was the Seattle quintet’s first tour outside of the West Coast. Closing out with a blistering cover of David Bowie’s “Hallo Spaceboy,” Legion Within certainly gained a few new fans by the end the set. 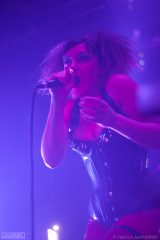 After an interlude of classical music, including Strauss’ “Blue Danube,” the lights dimmed and the venue was filled near to capacity with a crowd that let out a roar of welcome for the Ultra-Heavy Beat. Beginning with crowd favorite “D.I.Y.,” KMFDM unleashed its industrial rock juggernaut with a plethora of newer tracks from the KUNST and WTF?! albums, with title track “KUNST” receiving quite the response as the crowd shouted by the lyrics “Kill Mother Fucking Depeche Mode” with intense fervor. Vocalist Lucia is already renowned for her catlike motions onstage, which along with her wild mane of hair made “Animal Out” a veritable favorite of the night’s set, while other tracks like “Ave Maria,” “Quake,” and especially “Pussy Riot” served as reminders of KMFDM’s ability to create music as fresh as it is familiar, as explosive as it is engaging. From the guttural punch of “Lynch Mob” to the raucous battering of “Free Your Hate” and “Tohuvabohu,” the band was in characteristically fine form. Decked out in his trademark aviator mirrorshades and blackened sports gear acting as a sort of cybernetic armor, founder and front man Sascha “Käpt’n K” Konietzko exhibited his usual bravado and showmanship – it’s easy to forget the man has been at this for nearly three decades. Equally impressive as always were guitarists Steve White with his rhythmic power and imposing stature and Jules Hodgson whose fingers seem to defy the limitations of the average axeman, while drummer Andy Selway played with a mix of punk rock abandon and machinelike precision, particularly on “Son of a Gun.” With the brutal march of “Hau Ruck” ending the set, the band exited, leaving the crowd to keep the volume on high, demanding an encore… 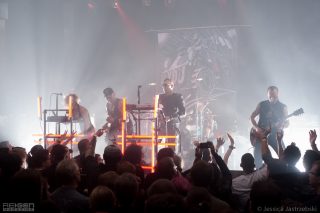 …and what an encore?! With an interlude rendition of “Sucks” giving way to a special version of “I Heart You” (filtered through the cadence and samples of “Don’t Blow Your Top”) and leading into the moshpit ready assault of “WWIII,” there could be no question as to the source of KMFDM’s longevity: the fans. With the second encore consisting of fan favorites “Megalomaniac” and finally “A Drug Against War,” KMFDM bade its farewell to a virulent audience that continued to shout for more even as the lights finally came on to end the night.

Eardrums were shattered, bodies were pummeled, and it could not be said that a single patron walked out of the State Theatre unsatisfied with the 2013 KUNST Tour. Nearly three decades on with no signs of slowing down, and reigning in some new blood along the way, the band lives up to the first song’s lyric that “KMFDM will never stop!”