Just before the band kicked off its stint as the opening act for the Revolution 3 Tour, Julien-K performed a handful of headlining shows, one of which occurred in Merriam, KS, on the western part of the Kansas City metropolitan area. The show also doubled as a local music showcase, with a diverse mix of new, old, and some returning bands. 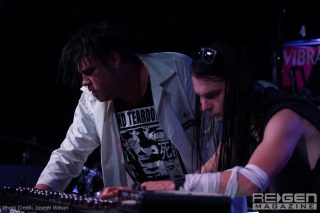 Strictures began the proceedings, an electro/industrial/dance duo that has been together since 2006, although this was the band’s first show in six years. The production, performed by Jess C.B., felt like a cross between modern styles of electro/industrial and early ’90s rave music, which seemed to be improvised through various loops. Vocalist Dan “Splattr” Killmartin brought the music back to the industrial side of things, his voice distorted and pitch-shifted so low that it was difficult to understand him even without any music playing; however, it did succeed in giving the music a darker edge than it might have had otherwise. While the set wasn’t very polished, it was refreshing to see an electronic dance music set, industrial or otherwise, that wasn’t centered on a DJ. 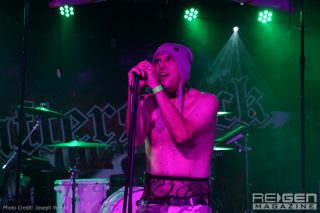 Next up was Agony Machine, the one man show of Rabbitt von Gustav – a.k.a. Gothic Bob. His setup was rather minimal with a sampler, keyboard, and a vocal manipulator, while the music was a bit of EBM combined with breakcore. Vocally he performs with very few vocal filters, but with a lot of live glitch effects, the lyrics thematically shifting between politics, BDSM, and self-deprecating humor; it’s somewhat reminiscent of Jello Biafra… if he had a rabbit fetish. In the middle of the set, Gothic Bob left the stage to be replaced by a young lady performing a bit of “Tiptoe Through the Tulips” with a ukulele, Tiny Tim style. Overall, a great deal of technical work could be heard in Agony Machine to sound better produced than a lot of more popular bands. 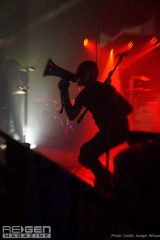 After that was Wichita’s Darken the Doorstep. When recording, everything is done by Nathaniel Varlet, who’s been working on the project for three years, but for the live show, Varlet relegates himself to vocal duties as he is joined by Travis Edwards on guitar and Mitch Baty on keyboards. This was only the band’s second time performing live, although the performance didn’t seem to indicate that. Darken the Doorstep’s use of costumes, makeup, and the band’s own lighting gear provided a greater presence than many more seasoned bands, with the music possessing an older gothic sound of keyboard and drums combined with harder industrial/rock. With only a handful of songs, the set was fairly short, but the group made a big impression with the audience, emitting a lot of energy with Varlet bouncing around the stage and working the crowd, who responded in kind. 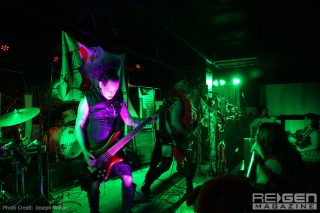 Following that was Vibralux, one of Kansas City’s mainstays since 2003. The band consists of Mercury Mad on guitar and vocals, Asmo Deus on bass, Ken Pillar on drums, and Simone and Hobbes on backup vocals, tambourines, and kazoos. Musically, Vibralux describes itself as a grungy glitter glam rock cabaret… I don’t know that I could describe them any better than that. Elements of ’70s style glam and punk rock clash with guitar solos evocative of Smashing Pumpkins, cabaret overtones, and a voice similar to John Darnielle of the Mountain Goats. 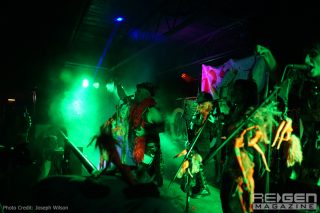 Visually, it looks like John Waters exploded all over the stage, with naked Barbie dolls strung together all over the stage equipment, along with stuffed animals strewn about, the words “CUNT” and “BITCH” in big letters on the stage behind the band. The shaven headed and goateed Mercury Mad was dressed like a cross between Dr. Frank N. Furter and Liza Minnelli, playing up the crowd like a preacher, complete with a sacrament of mini-muffins given out to the crowd in the middle of the set. The band sounded tight even when it felt improvised, and the performers looked like they were having fun… and so did the crowd.

In between sets was a performance by the Suicide Spark Sisters, Psyren Damson and Luna Grey, using various steel plates attached to their bodies and metal grinders to shoot sparks across the room to the tunes of Rob Zombie and Marilyn Manson. It was a good relief from the normal downtime in between bands. 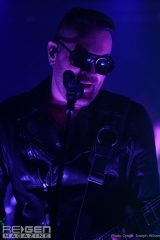 Then Julien-K took the stage. After the stage art and banners that adorned Vibralux’s set, Julien-K’s setup looked downright minimalist. Singer Ryan Shuck and guitarist Amir Derakh both came out with iPads on a stand, while keyboardist/bass player Bibi Cobra and drummer Alex Gonzales had their instruments on hand, so the stage wasn’t completely empty. The minimalism did fit with the lighting setup, having everything under lit in blues and giving everything a cool metallic feel, and both Shuck and Derakh ended up with guitars strapped to them by the end of the night. Shuck has a commanding stage presence as he effortlessly glides around the stage, belting out a string of fan favorites like “Flashpoint Riot,” “Strange Invisible,” “Kick the Bass,” and “Mannequin Eyes,” stopping partway through the set to talk to the fans. Julien-K fans tend to be a bit more loyal than most – every time the band launches a crowdfunding campaign, the fans go well beyond the requested amount; Shuck acknowledged this, citing it as the reason the band has the ability to play smaller shows like this one. 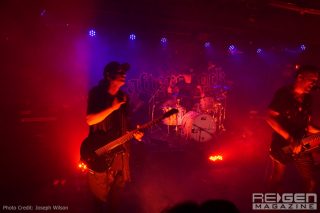